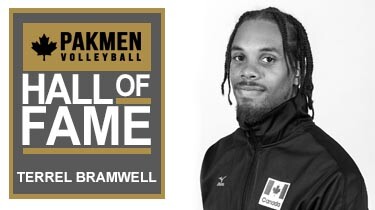 Terrel played with Pakmen from 2003-2008, during his time with the club Terell won multiple provincial and national championships. Terrel was on the Pakmen team that won their very first 18U National Championship in 2008, he was named the MVP of the tournament that year. Following Pakmen, Terrel attended Humber College where he continued his dominance by breaking numerous school and OCAA records. Terrel still holds the OCAA record for most kills and points in a match. Terrel has been a part of the National Team program and he has also played professionally in Israel, Thailand and Libya. Below are some of Terrel's notable accomplishments: 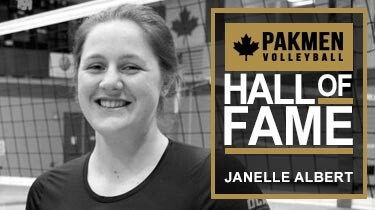 Janelle was a part of Pakmen from 2015-2017, as a member of the club Janelle helped her team win provincial and national titles. Janelles's team won an 18U National Championship in 2016 marking the first ever 18U Girls Championship in club history. Janelle went on to play at Ryeron, Fanshaw and Western University accumulating many accolades including a USPORT Championship in 2017 with the Ryerson Rams. Below is the list of some of Janelle's notable accomplishments: 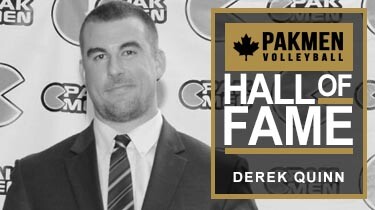 Derek was a member of Pakmen from 2003-2008, he was part of the first team in the club. During his time with Pakmen, Derek has won multiple indoor and national titles, notably in 2008 where Pakmen won its first 18U National Championship. Following Pakmen Derek went to Humber College and helped the Hawks to numerous championships. Below are some of Dereks notable accomplishments: 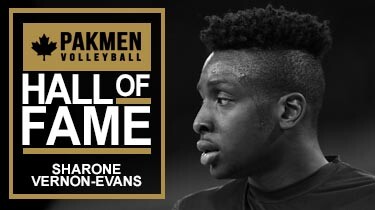 Sharone played for Pakmen from 2011-2016, during his time with Pakmen Sharone has won 9 Provincial Championships (6 indoor, 2 beach) and 5 National Championships(3 indoor, 2 beach). Upon graduating from Pakmen, Sharone was selected to play for Team Canada and has also played professionally in Poland and Italy. Sharone was selected to be a part of the Tokyo 2020 Olympic team where he represented Canada.

Below are some of Sharone's notable accomplishments: 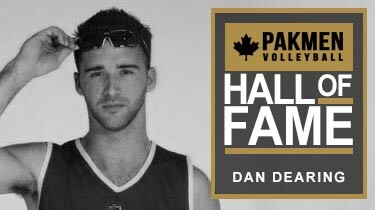 Daniel Dearing was a member of Pakmen from 2007-2008, during his time with our club he was the highest ranked youth beach volleyball player in the country. Daniel was also an important contributor to the clubs first ever 18U National Championship in 2008, he was named tournament All-Star. Since his time as a player Daniel was also a coach for Pakmen, he was a lead instructor in our house league programs as well as a Rep coach. Daniel has been representing Canada as a member of the Beach Volleyball National team and has competed in many international events. 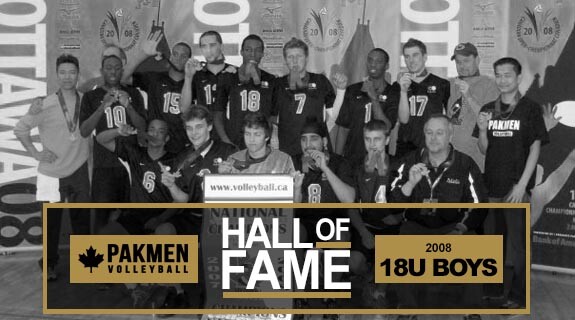 This team was the very first Pakmen team to win an 18U National Championship coached by club founder Kelly Smith. Members of the team were: 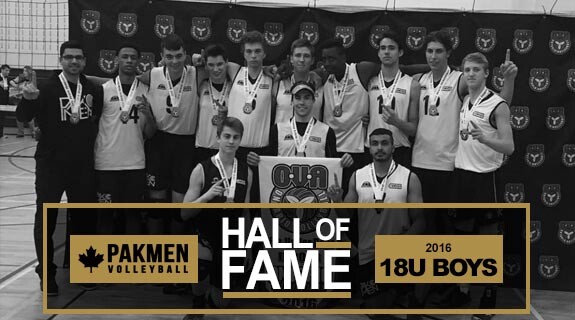 The 2016 Team is one of the most successful teams in the history of the OVA. In 5 seasons this team won 6 Indoor Provincial Championships. In 2015 (17U) they won 17U Provincials and also won 18U Provincials playing up, an accomplishment that no other team in the OVA has done. Members of the team were: 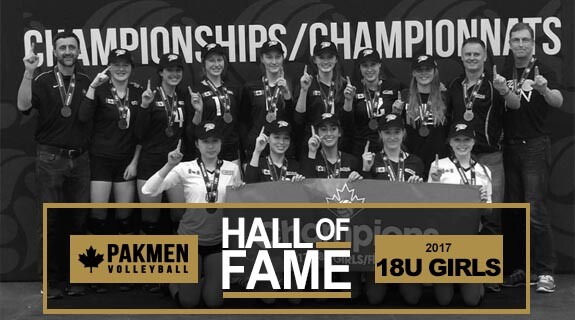 This is one of the most memorable teams in Pakmen, they were the first womens team in Pakmen history to win a National Championship. This team won all their playoff matches in straight sets to secure the clubs first 18U title on the women's side. Members of the team were: 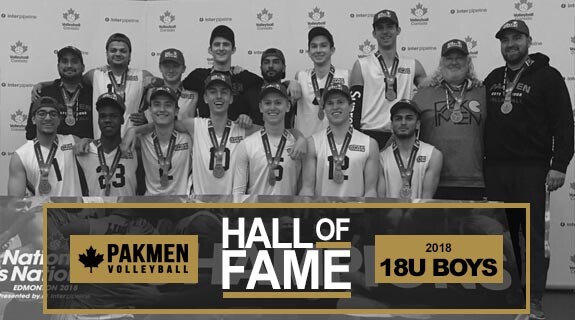 This 2018 team was the second time in club history that Pakmen won an 18U Championship. The 2018 team went nearly undefeated all season coached by Jessy Satti who was a member of the 08 team. This team won both Provincials and Nationals that year. Members are the team were: 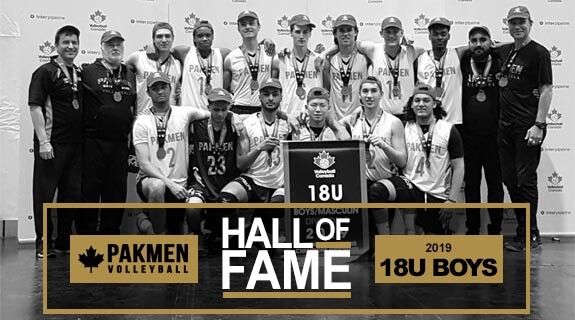 The 2019 18U Boys team is one of the most successful teams in Pakmen history. They are the only team in Pakmen history to win every major tournament in a single season (Provincials, Grand Prix, Nationals). This team helped solidify Pakmens dominance on a National scale by securing the club's 2nd 18U championship in a row. The 2019 team went undefeated in sets on day 3 to earn the national title. Members of the team were: 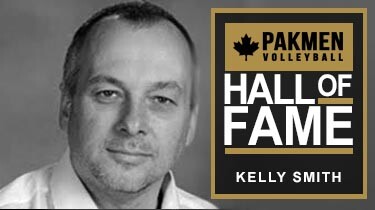 Kelly Smith is one of the most successful coaches in Ontario Volleyball history with over 200 Tier One tournament gold medals including 11 Provincial Championships and 6 National Championships. In 2008, Smith's u18 team became the first team in the club to win a u18 National title. Smith retired from coaching in 2017 after coaching back to back National titles. Smith never played volleyball.

Below are some of Smith's notable accomplishments: 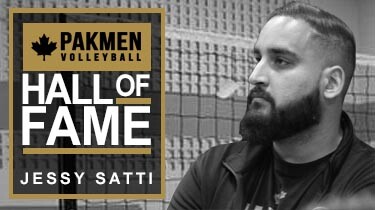 Jessy Satti played with Pakmen from 2003-2008, during his time with the club he won multiple provincial championships in indoor and beach as well as the clubs first 18U National Championship in 2008. Jessy has been coaching in our club since 2010 his most notable coaching accomplishment was winning back-to-back 18U National Championships in 2018 and 2019. Below are some accomplishments: 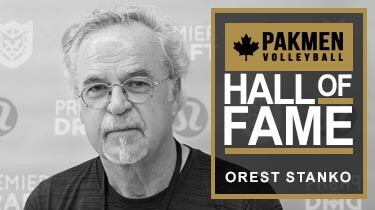 Orest Stanko was a legendary coach at UofT having coached there for 23 seasons, during that time he won 13 OUA Championships making him the most winningest coach in OUA Men's volleyball history. Orest joined Pakmen from 2013-2016, he won 3 Provincial Championships during his time with the club. One of Orest's notable club achievements was winning 2 Provincial titles in the same season with his 17U(1998 born) team, they won their own division and also won playing a year up at 18U. In his 18U year Orest coached Sharone Vernon-Evans and Jordan Pereira who now both represent Canada on the Olympic Team (2021). Below are more of Orest's volleyball achievements: 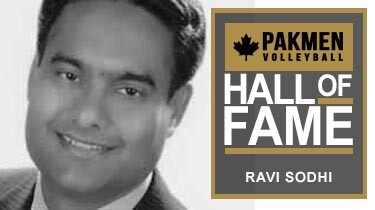 Ravi Sodhi is a businessman who understands the value our club brings to youth and the community at large. He has provided exceptional support to various teams, coaches and the club in general with his time, advice and financial resources. Ravi is a big thinker who makes positive things happen for youth. With his generosity, he has made a huge impact on our youth, now and for years to come. 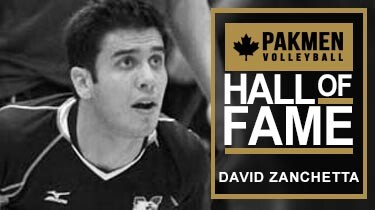 David Zanchetta was our first summer programs co-ordinator and his vision was the primary reason our summer programs became so popular. He started with a summer camp of 25 kids and built it into a summer program of close to 1000 players at multiple locations. David was responsible, caring, passionate and fun. He understood youth like few people ever will. David is now a successful civil engineer.

Kelly Smith is one of the most successful coaches in Ontario Volleyball history with over 200 Tier One tournament gold medals including 11 Provincial Championships and 6 National Championships. In 2008, Smith's u18 team became the first team in the club to win a u18 National title. Smith retired from coaching in 2017 after coaching back to back National titles. Smith never played volleyball.

Below are some of Smith's notable accomplishments: 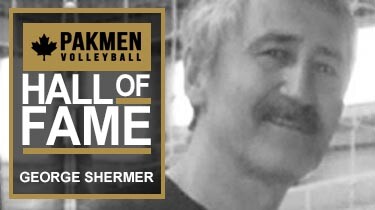 George Shermer, one of the owners of Beach Blast and one of the most influential people in Ontario volleyball, was a key person during the inception of our club. He provided invaluable advice which we used to create our short and long term goals. He also worked closely with us over several years to ensure our club got off on the right track. 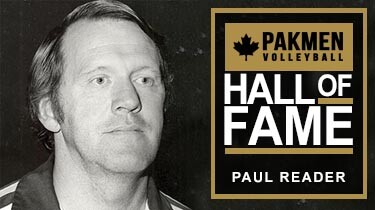 Paul Reader coached one of the most successful sport programs in OCAA history. Under his guidance, the Sheridan Bruins men’s volleyball team won seven OCAA championships and four national medals in twelve years, including a gold medal at the CCAA Championships in 1983. Reader acted as the first Master Coach for Pakmen and taught our founder, Kelly Smith, pretty much everything he knows about volleyball. Smith went on to train our coaching staff the same techniques and systems Reader taught him. Our club is very fortunate to have learned the game from one of the most respected volleyball coaches ever.