Hand sanitizing stations will be placed around the venue and athletes and staff will wash their hands regularly. Volleyballs will be sanitized regularly.

Players will have to follow the latest Ministry of Health/Ontario Volleyball guidelines with regards to wearing masks during physical activity.

Athletes will train twice a week for the entire summer (End of May-Mid August). They have the option of training on Fridays, as a third practice, for an additional fee.

This program is open to all rep level athletes, no matter which volleyball club they belong to. Many of our beach athletes play for other OVA volleyball clubs in the indoor season.

Please note athletes do not need to compete in the OVA Beach Tour to be a part of this program. 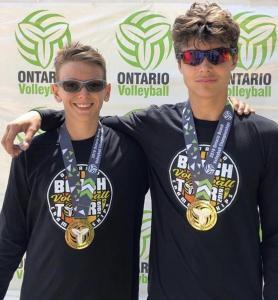 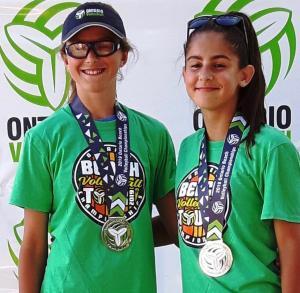 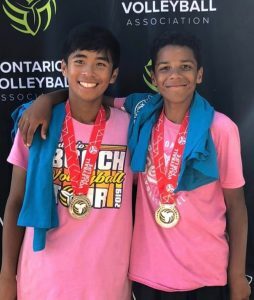 Our Beach program is led by our fully certified coaching staff who are dedicated to teaching the fundamentals of beach volleyball and preparing athletes to compete in the OVA Beach Tour. The Pakmen Elite Beach Program has earned 27 Provincial D1T1 Gold Medals and 14 National D1T1 Gold Medals since 2009.

*Practices will be moved to 4 to 6 pm and 6 to 8 pm later in the summer when it begins to gets darker earlier.

Quick Scroll to your Preferred Location

Chris Towe and his partner

Staff will be supervising check-in at the front door for each program. They will ask health screening questions to ensure no one with COVID symptoms enters the building and collect data to enable contact tracing. Only players will be permitted in the facility to ensure smaller numbers (no parents or spectators). The exception is Canlan Sports where one parent per child will be permitted inside the facility. Pakmen staff will conduct temperature checks when players enter the volleyball courts. Hand sanitizing stations will be placed around the venue and athletes and staff will wash their hands regularly. Coaches will wear masks at all times. Players will have to follow the latest Ministry of Health/Ontario Volleyball guidelines with regards to wearing masks during physical activity. Physical distancing of 2m will be enforced during these times. Volleyballs will be sanitized regularly.