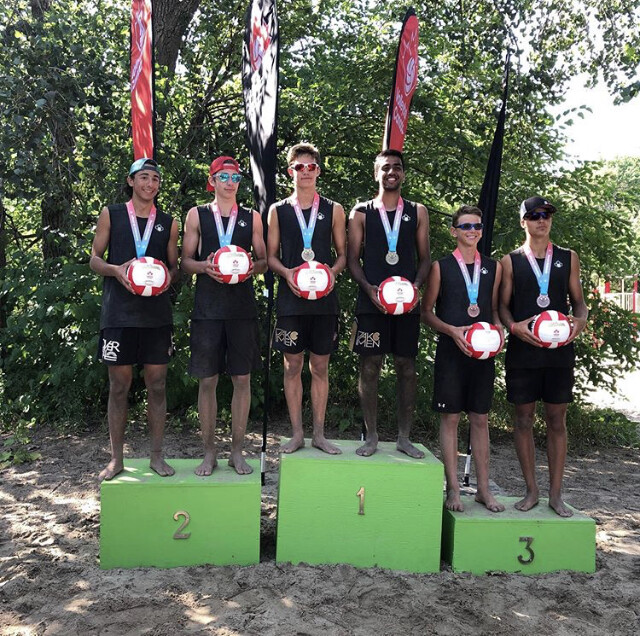 Kenneth Mann and Punit Shah’s firm grasp of top spot on the Canadian volleyball circuit seemed to be slipping during the 2019 beach season.

Champions the past two seasons, the Mississauga Pakmen tandem had less time to prepare this season, while simultaneously sensing all their rivals were fine tuning their games with their eyes focused on the podium’s top rung.

So when Mann and Shah struck gold at the 2019 Beach U16 Nationals at Toronto’s Ashbridges Bay August 16-18, there was an abundant amount of gratification and excitement in their voices.

“Winning has always been rewarding, and the excitement never diminishes,” explained Shah.

“But it was particularly sweet this year.”

“With mounting academic commitments,” said Shah, who will be attending the gifted program at Woodlands Secondary in the fall, “I was not able to put in as many practice hours as in previous years. I started practicing only three weeks before the Nationals and could team up with Kenneth for a mere two tournaments, way back in June.”

“Because of different commitments this summer, we didn’t play together for two months,” concurred Mann, who will return to Burlington’s Dr. Frank J. Hayden Secondary. “We only started training together a week before Provincials and, because of this, it was hard to improve our game.

“Instead, we just tried to get used to each other and play the game we know best. After Provincials, we trained more and more and our game improved through chemistry. We started to play like one unit and it felt like we were back to normal. Playing together for three years it didn’t take long for us to feel good about our level of play.”

“Our playing style hasn’t changed much,” chimed in Shah. “We have just had a change in mentality where we don’t hold back and just play our natural game, no matter how tight the match is. And it has certainly been a game changer.”

That change in aggression at the net may have been the difference at Nationals where the competition got a lot tougher.

“Every year, newer and stronger teams emerge,” said the 6-foot Shah. “And the long-time weathered teams are adding on more experience. Winning never gets easier against such high caliber and talented teams.”

“The winning doesn’t get easier it actually becomes more difficult because all the teams are training hard and they are better every season,” concurred Mann, who also stands at 6-foot. “The winning is more rewarding. No match is easy and we know our opponents are going to bring it every time they play us. We have to work hard at all aspects of our game to stay competitive.”

Yet, despite a few scares along the way, Mann and Shah did find a way to prevail, making their list of accomplishment over the past three years, since becoming teammates, absolutely sensational. 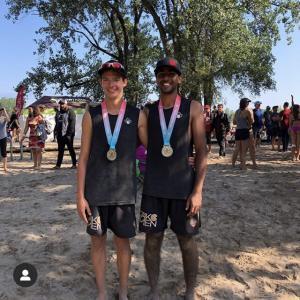 “Parker’s ability to read the attacker and Ivanovski’s large block at the net made them an excellent team,” reflected Shah. “In that match they played better than us.

“We certainly had mixed feelings about not playing them in the playoffs,” continued Shah, “because on the one hand we wanted redemption, but on the other, we knew it would be a very tough match.”

“We hadn’t played them all season and they were definitely a challenge for us,” said Mann. “I think we went into that match a little tentative and didn’t execute our game plan well.

“We wanted to play them again in the playoffs,” said Mann in a more optimistic tone, “because we knew the outcome would be completely different if we had the opportunity for a rematch. Unfortunately they ended up on the other side of the draw.”

“Against Johnston and Ellinas, both players were very difficult to read on defense and at the net,” said Shah. “By keeping a level head, and sticking to our game plan, we were able to come away with the victory. Meanwhile, Tanouchev and Moffat are very good attackers, who can mix up and disguise their shots well. Our mindset of touching every ball saw us through.”

“Johnston and Ellinas are a team that we know well because we trained with them during the summer,” added Mann. “They are a tough team that can’t be underestimated. Adam is a determined player and doesn’t give up on any point. Charlie is an excellent defender and is consistent with his shots. We knew we had to put pressure on them with our serves and had to be deliberate with our shot selections.

“Ben and Tony are as evenly skilled as us,” added Mann. “We knew they were going to bring it against us in the finals because we had beaten them Saturday in power pools and they wanted revenge. Tony is  a great defender and Ben is strong at the net. We match up well against them and knew we had to bring our ‘A’ game to beat them.”

Mann and Shah had company on the podium at Ashbridges as Pakmen teammates Kaden Schmidt and Peyton Fulmer claimed the bronze medal.