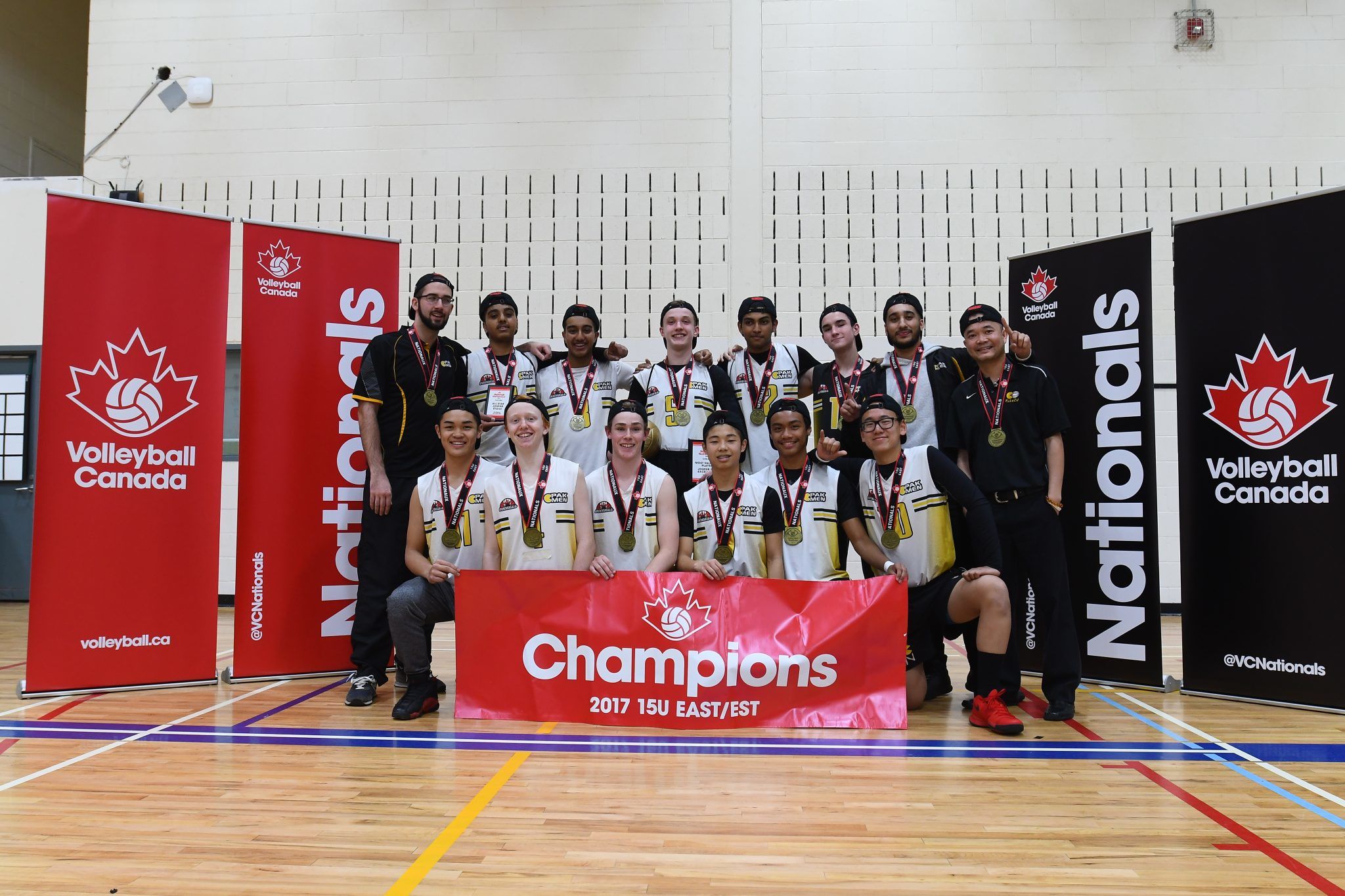 Head coach Aleksandar Mamuzic realized his 15U boys’ team was in desperate straits when he had to recruit players from elsewhere in order to successfully complete a practice.

It got so bad that a rising number of players were filling the seats as spectators, rather than taking to the court for Mississauga Pakmen practices.

But somewhere along the way, this MASH unit, which grew accustomed to doing without, put it all together to win both the OVA Provincial Championships and the Volleyball Canada Eastern Nationals May 11-14 at Waterloo’s RIM Park.

“We had six major injuries during the year,” summed up Mamuzic, who knew enough about the human anatomy at the end of the season to enter medical school. “Toe, knee, two ankles, shoulder and a broken arm. It’s really tough to run a competitive practice when you’re short players. 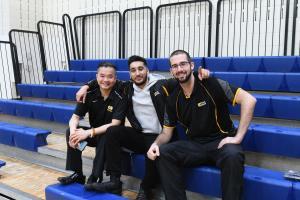 “Luckily we were able to get kids on our older teams, and even some former players, to come scrimmage. It really helped push them and bring some high intensity to our games.”

Despite all the injuries, each and every player never lost sight of their chief focus…making up for last year’s disappointing finish at Nationals.

“The boys practiced really hard and it definitely paid off in the end,” said Mamuzic.”They’re a good group of kids that had the same goal of winning Nationals after last year’s defeat in the quarter-finals. When it came down to it, they fought for what we all knew belonged to them.”

Injuries even drove one player to pack it in midway through the season.

“We spent a lot of time working on competitive game-play and closing out matches in the last month and a half of practices and it really paid off,” said Mamuzic. “It proved to the boys that we were the best team when we stayed focused and played our game.” 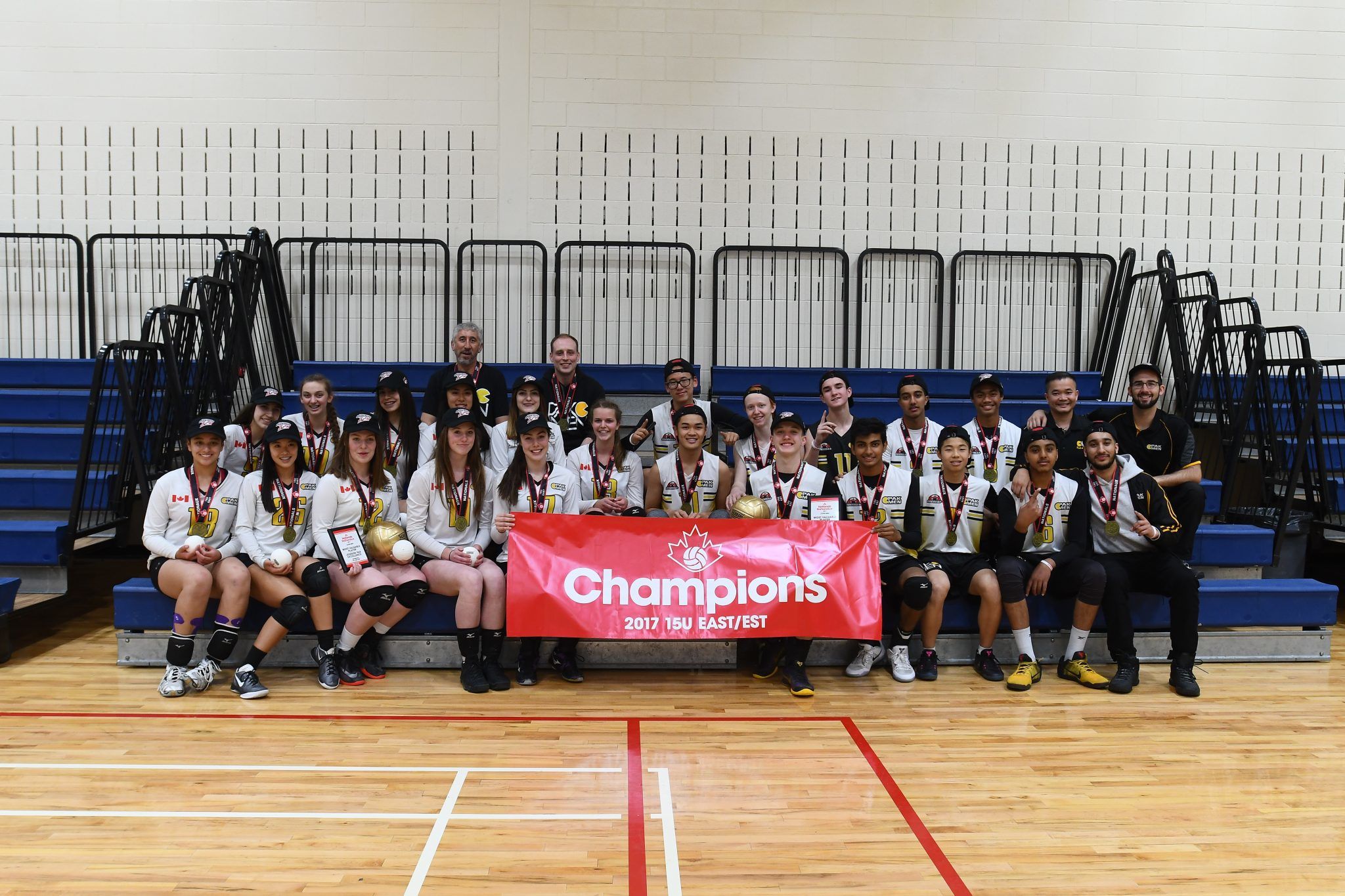 According to Mamuzic, the team’s biggest gains, other than getting back some healthy players, were on “out of system setting and attacking. The amount of points we scored out of system that most other teams free balled over, made a huge difference and brought a lot of momentum to the matches.”

Further explaining himself, Mamuzic pointed out “when you dig, or pass a ball away from the net (bad pass), most teams put an easy lob shot over. But our guys attacked that ball hard 90 per cent of the time.”

“This year we faced lots of adversity between players being injured and a change in coaching,” said Thandi. “It took us some time really to put all of the pieces of the puzzle together for both Provincials and Nationals. Other than one three-setter game we did a really good job in handling most of our competitors. It was obvious that we were the best team in the province in April and May.”

Like all of his teammates, a few injuries weren’t going to get in the way of their focus.

“The players on our team work extremely hard on a daily basis,” said the 6-foot Thandi. “We had all set goals early in the season as a team to win Provincials and then win Nationals. Last year our team won Provincials, however we were devastated when we lost in the quarters of Nationals. That loss stayed with us, and it motivated us to work hard as a team this year. Our practices over the past month, or so, were very intense and everyone was locked in to ensure we reached our goal of being Provincial and National champions.”

It didn’t take long for Thandi to illustrate where the players improved the most over the past indoor season under the tutelage of Mamuzic and assistants Diem Huynh and Sahil Punni.

“Two areas we drastically improved in over the course of the year was our serve receive and then our defense. Defense, I think, was the key to our win at both the Provincial and National level.

“Winning Nationals has been my biggest accomplishment as an individual player and for our team as well,” added the Mississauga Secondary School Grade 9 student. “Being back-to-back Provincial champions was sweet, but we wanted to win Nationals because of our defeat last year in the quarter-finals. I look forward to next year when Nationals is all of Canada – it will be fun to play some new teams, particularly from the west coast.”

Another Mississaugan, Grade 9 Our Lady of Mount Carmel student Szolno, didn’t hesitate in stating, “the win at Nationals was most definitely the best memory in my volleyball career.”

With this being his third year, the 6-foot-2 Szolno can expect more highlights in seasons to come.

“I am extremely grateful to the Pakmen for recruiting me two years ago, and seeing  the potential in me while I didn’t, and most importantly awakening the love for the sport of volleyball, which I didn’t know existed.”

It was evident the love for volleyball was shared by the entire team, enabling the players to devote the time and energy needed to improve their game despite obvious physical challenges.

“Leading up to Nationals, our team’s performance consistently improved,” said Szolno. “We worked on our communication, defense and we upped our mental game.”

“Prior to the Provincials our team was ranked third,” added Szolno. “But, with big determination and improved skills and strategies, our team came to win Provincials and Nationals. The success was also due to the consistent serves, incredible sets and defense of our strategic captain Davis Young.”

By the time Nationals rolled around, there wasn’t an opponent capable of giving the Pakmen a tough battle, as they lost only one set along the way. 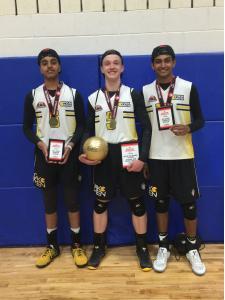 And, while it may sound a big callous to admit it, Szolno said, “The results of the games we played were indicative of the ease with which our team swept all eight matches during Nationals.”

Pakmen 15U girls prove to be fast learners