Pakmen 15U girls prove to be fast learners 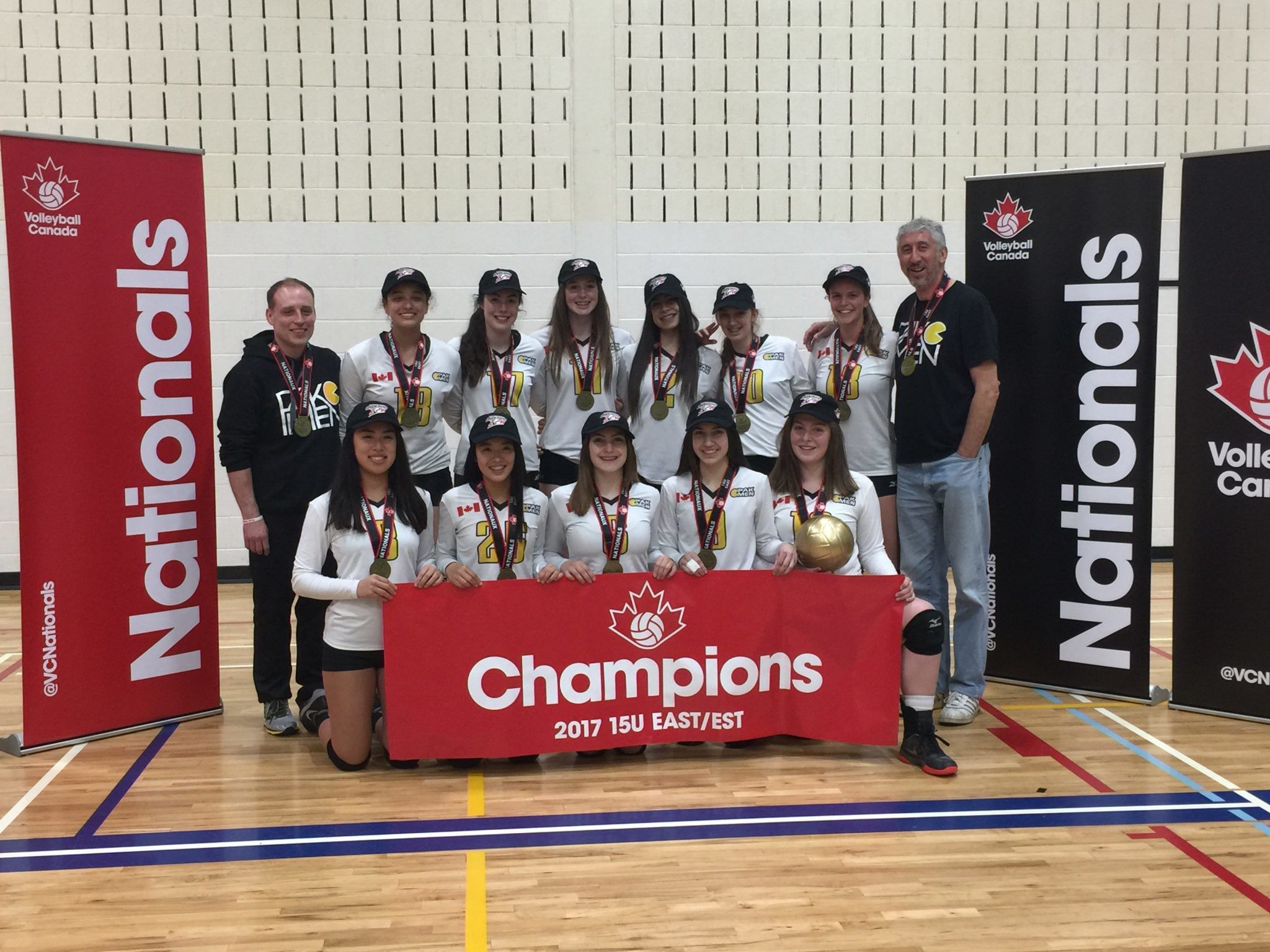 Some of the greatest athletes the sports world has ever known considered themselves ‘students of the game’.

They realized, despite their immense talent, there was always something new to learn and improve on, and that being a student of the game is in direct correlation with success.

Members of the Mississauga Pakmen 15U girls’ team have developed an urge to learn early in their careers. And that quest for knowledge paid immense dividends in the form of Eastern National gold medals.

Pakmen won all nine of their matches at Milton’s RIM Park May 12-14, sweeping aside all of their opponents by straight sets until an opening set loss to Halton Hurricanes in the final, which was soon quashed with a 23-25, 25-16, 15-10 decision.

“I think the secret to our success was our team unity,” said head coach Rick Christiansen. “The girls always treated each other with respect on and off the court.

“Also, they are students of the game. Away from practice they would watch university games at York or international games on youtube.”

“I think it is important to recognize Hernan’s contribution as integral in our success,” said Christiansen. “Even though he is listed as my assistant, a better title would have been a mentor coach. The experience I gained as a young coach learning from such a volleyball legend cannot be understated, and no course or workshop could have provided me with the knowledge of the sport I, and the players, gained from working with him. He is not only a great volleyball mind, but also one of the most generous, thoughtful and kind people I have been fortunate enough to work with and call a friend.”

Humana, a professor at York University and a novelist, is also a former member of the Chilean national team, who coached Canada’s John Child and Mark Heese to this country’s only Olympic medal on the beach – a bronze in 1996.

Still a true student of the game himself, Humana expounded upon the benefits of meditation and how controlled breathing promotes relaxation and focus.

“Hernan implemented meditation before practices and I believe that helped us to control our thoughts and our breathing in order to remain calm and come back,” insisted Christiansen.

“I think we did a lot of things better than last year,” explained Humana. “We meditated far more consistently. We were also more disciplined. We did ‘Specific physical training’ early in the season. And we had the players constantly involved in explaining the purpose of drills and key points of skills.

“Our opponents were not far from us,” added Humana. “I would say, some of them were bigger than us.  But we were able to stay confident and assertive throughout the games. I think we believe in ourselves longer than the other teams.”

Christiansen and Humana also devoted extra energy to the service part of the game.

“We vowed to work towards being the best serving team in Canada,” agreed captain Nicole Wernham, about the team’s strategy. “We believed this would benefit, not only our servers, but our passers as well. Since these are the two most important skills in volleyball, we believed they deserved special training and goals. With this mindset, our practices became more intense and we pushed each other to get better in both serving and serve receive.”

“We really focused on serving throughout the year since it is the one skill that you control completely,” confirmed co-captain Fabianna Suarez-Egusquiza. “By the end of the season I think we really did reach our goal (of becoming the best serving team in Canada) since we showed that our serve is one of our biggest weapons and it definitely affected any team we played.”

“There wasn’t just one thing that contributed to our team’s success,” offered Wernham, a Grade 9 student at Mississauga’s St. Aloysius Gonzaga Secondary School. “It was a combination of efforts and contributions from all 11 of us and our two coaches.

“From the beginning of the year, we had a natural team bond that continued to grow and develop over the season,” said Wernham. “Our team unity and friendship was one of the biggest factors in our team’s success. Our practices leading up to Nationals were also key. At the beginning of every practice, we began with five minutes of mindfulness and controlled breathing. It helped us stay calm through tight situations and helped us come back after losing the first set of the finals. On top of that, when you get two good teams, the difference is the hard work you put in and the desire to fight for a good outcome. Our love for volleyball, and each other, helped put us over the top.”

Quarter finalists at last year’s Provincials and bronze medalists at Eastern Nationals in Ottawa, the Pakmen also made some key additions to the lineup at the beginning of the indoor season.

“I feel we had a huge improvement over last year,” said Humana. “We got a few new very talented players in Masha Solaja, Sarah Chen, Julia Capone and Aimee Lemire, who melded very nicely with the old group, to become a tough, competitive team.”

“Together, we were truly a ‘team’,” said Humana. “We (coaches, players and parents) created a balanced group with very few hiccups. It was truly an honor and privilege to work with this team. Rick was the quiet and thoughtful leader, every successful group needs.”

“Winning Nationals really made me realize that we can beat anyone if we really set our minds to it,” added Suarez-Egusquiza, a 5-foot-10 middle out of Mississauga’s St. Martin Secondary School. “At times throughout the season our team would sometimes be intimidated by a team, but now I feel like we can look at ourselves as national champions and know that no team is better than us.”

“Words can’t describe the feeling of winning the National Championships,” added the 5-foot-10 Wernham. “It’s something we’ve dreamed about since we started playing. Knowing that our hard work all season finally paid off in achieving one of our biggest goals, is an incredibly satisfying feeling. It surpassed how I thought it would feel and it was definitely an amazing emotional moment that excites me for the future. Now that we have proven our capability, I am excited to go forward and work even harder next season.”

Prior to defeating the Hurricanes in the final, the Pakmen swept the Newfoundland Sea Hawks, Quebec Attaque Bleu, Cambridge Scorpion Fusion, Quebec Aigles, Georgetown Impact, Durham Attack, Markham Reach Prime in the quarters and Scarborough Titans in the semi-finals.