Pakmen building Milton’s volleyball ranks one ‘Spike’ at a time 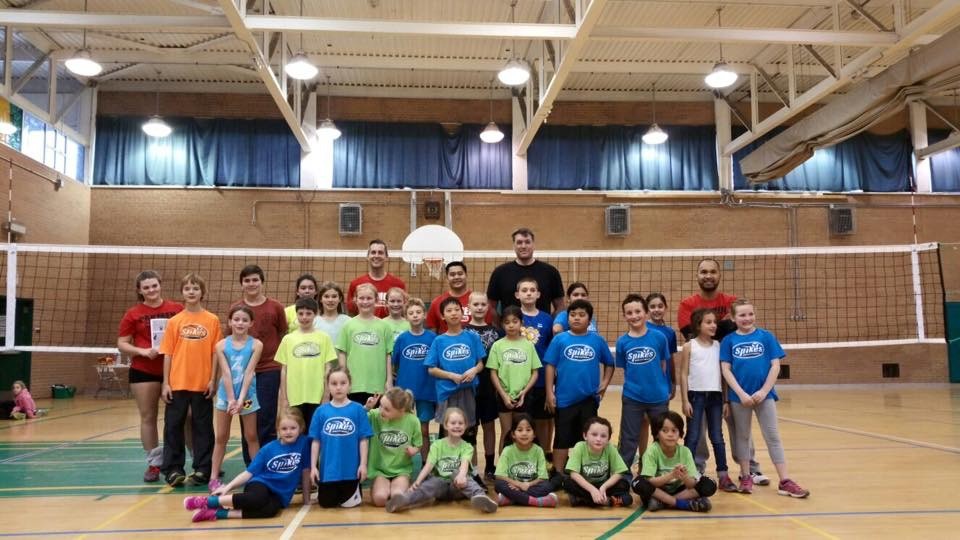 For a small community, Milton has had a bevy of larger than life personalities.

From explorers, to inventors, to idolized athletes, Miltonians have grabbed more than their share of headlines. Whether it be astronaut Chris Hadfield becoming the first Canadian to walk in space, inventor P.L. Robertson designing an improved and internationally acclaimed screw and driver, or pro wrestler Tiger Jeet Singh flattening opponents from Canada, to Japan, to South Africa well into his 60s, the list of luminaries is impressive.

Indeed, Miltonians have cast a giant shadow worldwide, and dare we say, beyond.

Canada’s fastest growing city, with a population exceeding 100,000, Milton will, with little doubt, remain a trendsetter.

Keeping pace with the city’s advances, is the Milton Pakmen volleyball club. Having just celebrated its second anniversary, the club’s enrollment has expanded from 90 to 150 youngsters. And like the city itself, there’s no sign of the Pakmen slowing down.

Led by head coach Matt Dietz, a teacher and one-time all-star for the University of Toronto Blues, the club offers four programs, including Spikes for 6-12 year-olds, Grade 5-6 and Grade 7-8 Development Leagues, as well as semi-private lessons, called Technique Tutoring.

With “the majority of our programs selling out,” Dietz says, “we are looking to expand to a second day of the week and even to a summer program.” 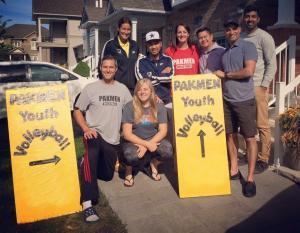 No surprise the programs are popular considering Dietz’s staff has over three decades of volleyball coaching experience.

That know-how begins with Dietz, who, among his many accomplishments, won three OUA (Ontario University Athletics) championships with the Varsity Blues between 1997-2001 under the tutelage of Olympian Marc Dunn and Hall of Fame coach Orest Stanko.

“Matt had the rare distinction of being slotted to play every position during his time as a member of the Varsity Blues men’s volleyball team,” said Stanko, who is now the head coach of the Mississauga Pakmen. “This was a testament to his all-around skills as a volleyball player and to his willingness to contribute in any way that helped the team be successful. Matt was not only skillful, but also a fierce competitor.”

Not only did Dietz learn from the best, he played with the best, alongside FIVB Beach veteran Mike Slean, Olympic Beach player Josh Binstock, and National Team Player Jeff Chung, to name a few.

Upon graduating, Dietz played professionally in Australia for two years, before returning to Ontario. An Elementary School teacher for 12 years, Dietz has continued his involvement in the sport by playing at the club level in an OVA men’s league while taking up coaching in house league in 2008 with the Mississauga Pakmen.

And Dietz is just one of a list of qualified coaches with the Milton Pakmen, who are predominantly Milton residents.

“Another major strength is that five of our coaches are also teachers and are highly energetic, qualified, and love working with young players,” says Dietz.

They include Matt’s wife Marijana, a teacher of five years, who starred for the Ryerson Rams for four;

Sarah Fredricks, a MIlton native and teacher at E.C. Drury School for the Deaf, who starred in both softball and volleyball at New York State’s Keuka College;

Geoff White, the OUA Rookie of the Year for the silver medalist McMaster Marauders, followed by successful stints at Wilfrid Laurier and Waterloo. Along with playing, White also served as an assistant coach for McMaster, Laurier, a beach volleyball academy and various summer camps;

Angela Curic, a high School teacher and coach for 10 years at St. Edmund Campion Secondary School in Brampton, as well as the Co-Athletic Director.

“I’ve enjoyed the challenge of learning to engage young children in a way that both keeps their interest, and teaches the fundamental movement and techniques of the sport of volleyball,” said White. “My generation started to learn the sport at the age of 14, so I’m looking forward to seeing the development of the sport once this first generation of Spikes graduates, rises up through the ranks of the sport, and become elite athletes in their own right.”

Along with four volunteer coaches, who have worked their way through the Milton programs and are currently starters for their respective high schools, the 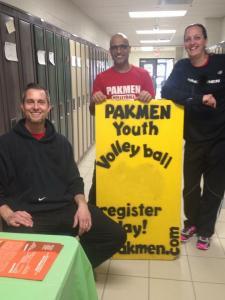 “The ratio of players to coaches in the respective programs are constantly changing,” said Dietz. “But, with the number of volunteer coaches we now have, and the two interpreter-coaches we use between 2:30 and 3:30 (on Saturdays for a special program for the deaf), the ratio (can) drop to one coach for every four students.”

“I initially joined Pakmen’s Development League to enhance my skills playing for my grade school’s volleyball team,” explained Reid, adding, “the Milton Pakmen coaches were not only able to instil the love of the game, they helped shape me into the person I am today. That is why I recently started to volunteer coach at Pakmen in fall 2015. I hope that I can have a positive impact on the players, the way my coaches impacted me.”

An added bonus to joining the Milton Pakmen, “was meeting many new friends, who will continue to be on, and off the court.”

“By volunteering with Pakmen, my confidence has grown,” says Lamers who admittedly knew little about the sport when she first met Dietz in Grade 5 through programs and camps with the Milton Sports Club. “I feel very comfortable teaching the younger kids the skills that were taught to me by the other Pakmen coaches. It has also allowed me to take on more responsibility and have a leadership role. This has helped me with the coaching as well as in life in general and at school.”

An added bonus to coaching, according to the Grade 9 Milton District High School student, “is that I am definitely improving my own game.

“I get repetition by showing the younger kids the skills, as well as help from the other coaches when they may notice something that I can improve on. They are constantly giving me tips and showing me how to improve my skills. They are also very approachable, when I have questions about the game.”

A power and middle for the Milton High School junior team, Lamers is also an accomplished rep fast-pitch player.

“I feel by being in the Pakmen program for the last two years, it definitely helped me make this (Milton junior) team. The knowledge and skills that I learned was an asset in giving me confidence during tryouts.”

Lamers hopes to crack a rep team next year and continue developing her skills into university or college.

“I can not say enough about the coaches at Pakmen. They make you feel very comfortable and answer all your questions as well as making each lesson extremely fun for the kids and volunteer coaches,” added Lamers.

Rounding out the quartet of volunteer coaches are Toric and Arandia, both Grade 10 students at Mississauga’s St. Joan of Arc Catholic School and members of the school’s Arc Angels junior volleyball team.

“For (four 10-week sessions over two years) now I’ve been attending this Milton program and it has helped me feel more confident about my playing skills and being on a team,” said Toric. “Since I became a volunteer coach, I’ve loved it. It’s definitely made me a more confident player. Being a coach, and learning from the younger kids, has definitely given me a new perspective on volleyball. I love how every week the kids show me what they practiced on, or some volleyball tricks they learned from their parents or online. That is what makes me so excited to come back every week.

“Being with the Pakmen has helped me become a stronger and more open player,” added Toric, a middle front, blocker. “I say ‘a stronger more open player’ because they have taught me to think on my feet and be on the balls of my feet, and keep moving. But, I also mean they have made me a more open player to the different techniques and possibilities I wasn’t getting through school. I became a stronger player because they have shown me that I can spike and serve even when I thought it was impossible. No one else was showing me how to do it. They really break down every piece of the puzzle in order to help me.

“One of the things that has made the Milton program a lot of fun, is how the program is constantly organized and everyone, no matter the age, is allowed to try all different techniques from the coaches. For as long as I’ve been with the Milton program, I haven’t been disappointed,” she added.

Arandia also swears by the program and how it helped her grow, both mentally and physically.

“The program has not only helped me improve my game, it has also helped me become a better volunteer coach and a more outgoing person,” said Arandia, who helps with the 40 children in the Spikes program and the 40 youngsters in the 11-14 year-old grouping. “Every time I go, I always learn something new. Whether it is a new skill, or becoming better at a skill I already knew.

“It is fair to say the program has helped me grow in confidence and made me a more mature individual,” she said. “When I first started volunteering I was shy not knowing if I was coaching properly, or if I was a good coach. But as I continued, I became more confident.

“Also, being a coach, I have found ways to improve my game.

“I love the Milton program,” summed up Arandia. “I have been part of it for a few years now and every time I go, I have a great time. All the other coaches, staff and volunteers are all really friendly and kind.”

And with the coaches possessing such strengths and unique backgrounds, it’s not surprising that the Milton Pakmen have incorporated special programs for children with autism and ADHD.

“And this will be the first full year since we have offered an inclusive program for deaf students, with a complement of two interpreters who attend that hour-long session (both of whom are teachers at E.C. Drury school for the deaf). We are looking forward to that program growing this calendar year,” said Dietz.

Getting it done in Chicago!