Pakmen lends its support and immense talent to IndoCan club 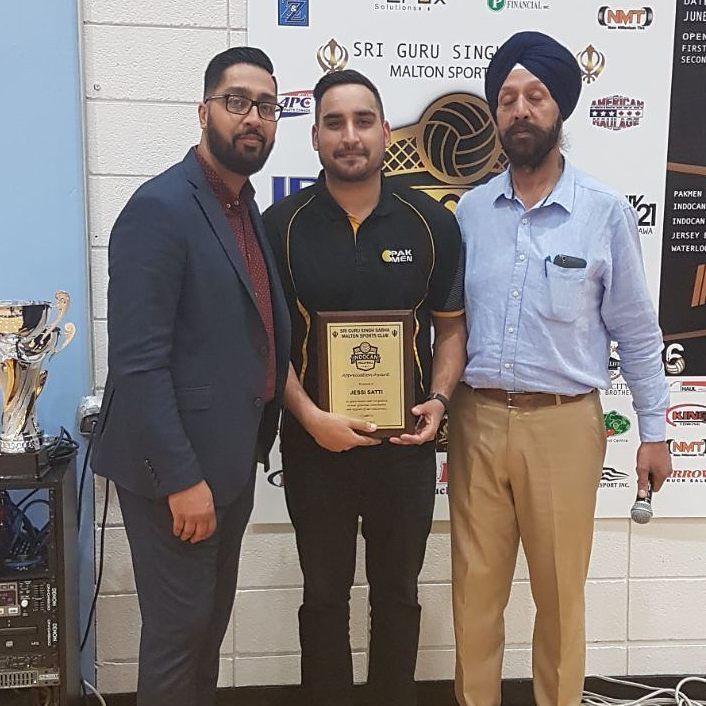 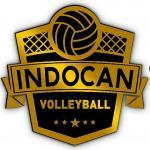 Few of us are lucky enough to meet our idols.

When that once in a lifetime opportunity arises, it might be in the way of a glimpse, or if one is extremely fortunate, a handshake and an autograph.

Brampton’s Sukh Singh should therefore consider himself three times lucky. Not only did he meet his sports idol at an impressionable age, he later had the opportunity to play alongside the volleyball star, and in time, join forces with Ranvir Bains to head up the IndoCan Volleyball Club.

Comprised of players whose parents, or grandparents were born in India, the IndoCan team has become a star attraction within the enormous Indian community of Ontario that has swelled beyond 700,000 with a majority making Peel their home.

And when it comes time to pool resources and form an IndoCan team to compete at an upcoming local, national, or international event, the Pakmen Volleyball Club is always front and centre providing support and players.

With the input of Pakmen coach Jessy Satti, the IndoCan club, headed up by Singh, Bains and Sucha Randhawa has taken on and beaten the best teams North America and India can offer.

So much so that IndoCan’s opponents below the 49th parallel have resorted to forming all-star teams comprised of Indian National Team members to wrest the gold medal away at the annual KLAP Volleyball Tournament at the Maryland Junior Sports Centre near Baltimore. 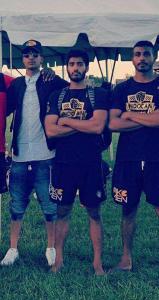 Competing in such elite company is quite the leap for Singh, who grew up with his brother in Stoney Creek.

“When I went to elementary school, I was the only Indian to play in any sport in the Golden Horseshoe,” recalls Singh, who is now 43 and a Brampton resident. “I was the only person in my school to wear a turban. It was a definite culture shock.”

In an attempt to further instill their children in the Indian culture, Singh’s parents would often take them to festivals and even special volleyball camps.

It was at one of those festivals that the then 10-year-old Singh first met Bains. While the main attraction was a Kabaddi tournament, there were other sports featured, including volleyball. That’s when Singh realized for the first time, “Indian people play volleyball.” Bains, in particular, caught Singh’s imagination since he was heads and shoulders better than the competition. A star for Morning Star Secondary School at the time, Bains later won provincial gold and national silver with Sheridan College.

Singh continued to meet Bains from time to time after that event, and years later when some of Bains’ teammates stopped playing, Bains asked Singh if he had any interest in putting a team together.

As if the request happened yesterday, Singh still remembers his reaction, when “asked by my idol to play on his team.”

Initially a member of the North American Indopak Volleyball Circuit, the Punjabi Falcons later became the Indo-Canada team in 2004.

Nowadays the Indo-Can squad is 80 per cent comprised of former and present-day Pakmen players.

“They’re really important to us,” said Singh of the Pakmen connection that began about 10 years ago when Singh spotted Satti at a match. Initially, Satti couldn’t understand why a complete stranger would approach him at courtside and was so excited to meet him partly because he wore a turban.

“I run an Indian club, play with us, play with us,” Singh remembers excitedly asking Satti at the time. And it has since blossomed into a tremendous relationship with Satti often introducing Pakmen players to Singh. “Jessy has been our main guy for getting amazing players. He always lets me know about players and he’s played a major role in our expansion.”

And Satti, who never heard of the IndoCan club until Sukh approached him as a 17-year-old, emphasizes the relationship between IndoCan and Pakmen is beneficial to both sides.

“I think it’s given a lot of kids in our community an opportunity to connect with their culture through the sport,” said Satti. “Volleyball is really popular in the Indian community and it’s been a great way for some athletes on our team to be a part of a cultural experience. I learned a lot about my culture from playing in these tournaments growing up, meeting people from different countries and sharing a similar passion for the game.” 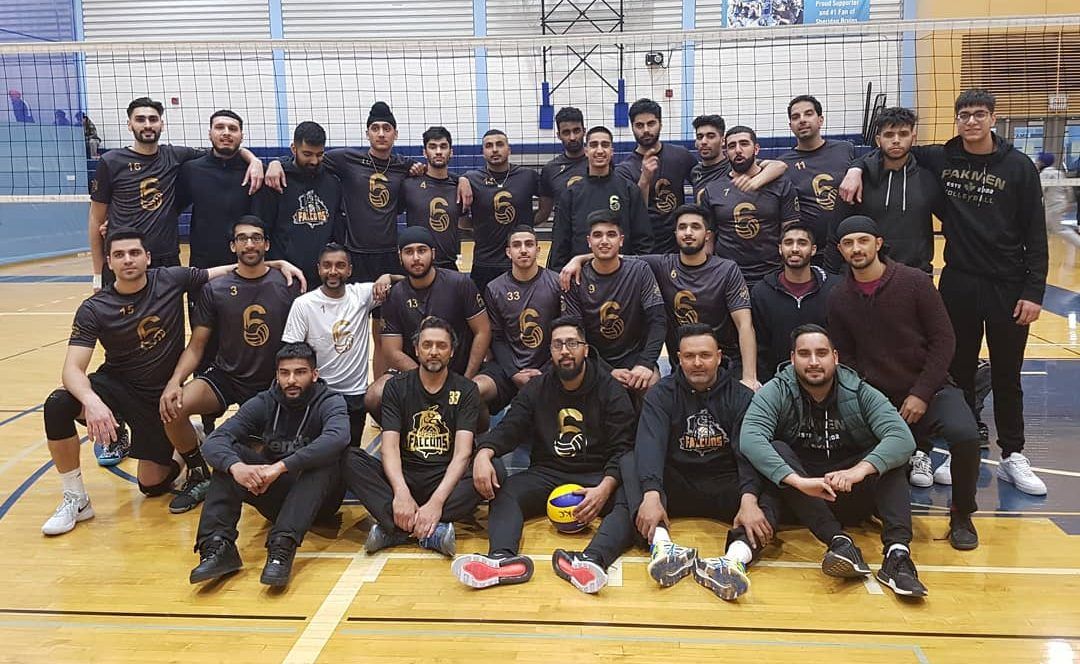 Pakmen’s involvement in the IndoCan club has also culminated in giving Pakmen a greater presence.

“I think it’s given us some recognition in the Indian community,” concurred Satti. “I had a lot of parents come up to me after tournaments and ask me how they could enroll their children in Pakmen. It was nice for them to see that kids from our community can excel in volleyball and that (opportunities are) readily available.”

And its little wonder the relationship between IndoCan and Pakmen has taken off, since both Satti and Singh are driven by the same passion.

“I simply just want to promote volleyball amongst the Indian community as much as I can.”

And Singh is thankful that JB Rand Express, which is owned by friend and associate Randhawa, has taken a lead role in supporting the team through sponsorship. When it comes to hosting a tournament, or travelling south to take on the best sides in the United States, “A business has never said no to me,” a grateful Singh beams in regard to the community support he and his team have received. “They’re happy to see young kids doing something.”

Last year the team attained $40,000 in sponsorship money to host their own event.

And the pressures to host an elite event are immense.

As an example, their hosts at the annual KLAP tournament in Maryland go out of their way to provide a warm welcome to the IndoCan team.

“They want us to come,” says Singh of their American hosts. “They go out of their way to provide us with hotel accommodations and expenses in order for us to compete in their tournament. They want to beat us that badly.” 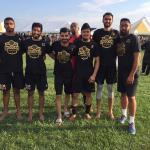 And for good reason, IndoCan posted three consecutive championships in Maryland from 2013-2015, spurring their American hosts to form an all-star team with its sole purpose beating the Canadians.

“In 2016, a Florida team’s setter, right side and left side were (plucked) from the Indian National Team, plus they added three or four of the top Americans,” said Singh. Because their American hosts have hand-picked many of the top players to represent one team, the A Division has been halved from eight to four teams, while the less competitive B Division has seen a rise in teams from 10 to 20.

“The indoor events have become very, very competitive,” offers Singh as an understatement.

Still IndoCan wins much more than it loses, capturing five of the six tournaments entered last year, including their own.

Tournaments they laid claim to included the IndoCan Cup, Windsor Cup, Cincinnati Cup, Canton Michigan tournament, and the IDC Cup, with support from members of the New Jersey-based Baadshaaz.

IndoCan hopes to keep on winning later this month (March 24) at Sheridan College at the OKD Canada Cup, which is hosted by the Ontario Kabaddi Club and will feature 10 teams, including three from IndoCan.

In all, the IndoCan club features 30 members, who currently or formerly, played high school, college or university ball.

“I didn’t know at the time we started IndoCan that we would expand this much,” marvels Singh.

Indeed it has. Tournament sites in recent years have included Vancouver, Detroit, New York, New Jersey, Atlanta, Windsor and Montreal, “with hotels, tournament fees, and food all free. The road trips to these events are what the kids love.

“My main goal is that IndoCan is there fore kids from Pakmen who are done college or university and still want to play competitive volleyball.”

Taking the lead role on the court these days is captain Terence Pragg-Singh.

“Sukh has become like an older brother to me and the team,” said Pragg-Singh, who is one of the few non-Pakmen alumni on the team. “He’s the mastermind behind all the madness that comes with running our Indian volleyball team. Always talking to players and trying to keep volleyball relevant to the youth in the Indian community.”

Like so many other IndoCan current and past players, Pragg-Singh was personally scouted by Singh at a college volleyball match.

“I first heard of IndoCan while I was playing at Humber,” recalls Pragg-Singh. “Sukh and Bobby (Randhawa also a Humber volleyball alumnus) were at the game and were going through the (lineups) and saw my last name had Singh in it. Shortly after shaking hands with the opposing team, I was approached by Sukh and Bobby who congratulated me for the win then asked what my ethnicity was. I told them my father was Indian and my mother was Irish American.

“Being 21, I was sort of in shock that the two were so interested in me as a player, considering I had never met them before. They continued to tell me about the team and the opportunities for playing more competitive volleyball at a high level with other top Indian players across North America. 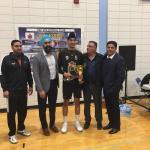 “What attracted me the most about joining IndoCan,” added Pragg-Singh, “was playing more volleyball at a high level and having it be something that promotes the culture. Especially for the younger generations of athletes in Canada from India and those of Indian descent, which made the decision to play for the team more appealing. I also thought it was a pretty cool opportunity to play volleyball on a team with all-Indian players because I hadn’t at the time played on any team that had another player of Indian descent.”

While the team has little time to prepare for tournaments because of conflicting schedules, experience playing with each other goes a long way in terms of finding success.

“A lot of the chemistry, especially among the younger players coming up, is the fact they have been brought up through the Pakmen volleyball program and have been playing together since a very young age,” says Pragg-Singh.

Another reason for success, according to the graduate of Toronto’s Central Tech and Humber, “is our depth and the high volleyball I.Q. of our players.

“All of us have played club or varsity at some point in our careers. Volleyball is a game of touches, and each player on our team still plays in other leagues across the GTA, if they are not currently playing varsity or club, and they also coach for Pakmen in various age groups.

“(Another) major part of the success is the team has had a strong core throughout the years and the guys, who have been established on the team, always try to instill a winning attitude for all the younger players.”

But, the biggest reason for the team’s success, according to Pragg-Singh is that IndoCan is, “A team for the community by the community. It already has a pre-built camaraderie instilled in it, giving us the advantage a lot of teams don’t possess.”