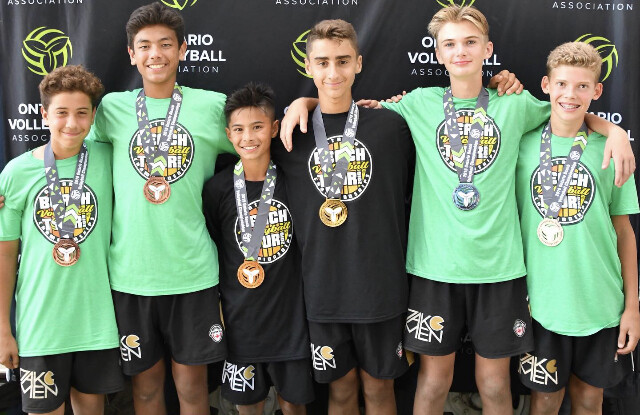 Playing as a tandem hasn’t always been easy for Pakmen beach partners Parker Ocampo and Paul Manna, which perhaps made winning gold that much sweeter at the Ontario Championships at Toronto’s Ashbridges Bay over the weekend (August 3-4).

Taking on 14 of the top teams in the province, Ocampo, 12, and Manna, 13, overcame their opponents, and at times themselves, to finish atop the podium with Pakmen teammates to their left and to their right.

“We have fun at tournaments, but honestly, there have been some tough losses,” explained Manna. “Parker and I have been frustrated, annoyed and tired with ourselves and each other, but we talk it out and it makes us tougher.”

“We have gone through many challenges — sometimes not communicating on the court; getting frustrated with one another or myself,” concurred Ocampo, “which led to not playing well in tournaments.”

Ocampo, who will attend Oakville’s Eastview Public School in the fall, added those miscommunications and frustrations came to a head at last year’s U13 championship when they finished just off the podium in fourth place.

But having difficulties communicating on the court has lessened for the duo, who also have two indoor seasons together under their belts with their most recent indoor season ending with gold.
With that experience, Ocampo says, “We have improved in our communication with one another. Us winning (indoor) Provincials together has also helped us to understand that it takes time and practice to train as a pair to be successful together.”

“I think our skills really complement each other,” says Manna, an Etobicoke native entering Grade 9 at Bishop Allen Academy next month. “But even more, our biggest skill as a team is being resilient.”

Ocampo and Manna certainly needed a healthy dose of resilience to get by their Pakmen indoor teammates in the playoffs after three straight preliminary round victories.
First, it was the duo of fourth-place finishers Matija Joksimovic and Brendan Chan in the semifinals, which they won 2-0 (21-16, 21-15). Next, in the final, Ocampo and Manna out-lasted yet another Pakmen tandem in Brecken Morrison and Christopher Tautrims, 2-1 (21-16, 14-21, 15-11). 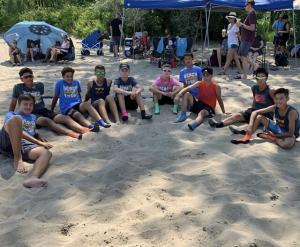 “We knew that the semi-finals would be tough,” said Manna. “I saw a bit of the last game Brendan and Matija played before we had to play them, and they were playing amazing. And then, during the final game, we totally had to push hard because Brecken and Chris had been playing fantastic together, not only that day, but all season.”

“We are two very strong teams with similar skills and training,” concurred Parker of their championship final foes Morrison and Tautrims. “The games could have gone either way.”
Manna added to be a part of a four-team Pakmen sweep made the outcome even more satisfying.

“It is exciting more than stressful,” said Manna of meeting up with Pakmen teams in the playoffs and prevailing. “(It shows) our Pakmen lineup was solid because we took first, second, third and fourth place at Beach Provincials this year! It is a great feeling to play and hangout at the beach with these guys. We have been through a lot over the last few years and I bet next year will be another awesome battle for the Provincial Championship title.”

“I think things went how they should have,” said Satti. “The top two teams trained against each other all summer — it really could have gone either way. It was a tight three-set match!
“I wasn’t surprised (with the four-team sweep),” added Satti. “We have a really good beach program and our athletes are very committed. These boys finished first in the Ontario Championships for indoor this past season, so I’m not surprised they ranked at the top of the beach season as well. They worked really hard this summer and the results were definitely deserving of our athletes.”

Despite the occasional hiccups Ocampo and Manna have struggled through, there’s little doubt their individual skill sets work well with one another.

“Paul has very good offensive skills, which pairs well with my defensive skills,” explained Ocampo. “We have a good understanding of each other’s abilities and know one another’s strengths and weaknesses.”

“Because of Paul’s physical attributes, (standing 5-foot-10) it allows him to be more aggressive and offensive at the net.

“Due to my physical attributes (standing 5-foot); smaller and quick, it allows me to get around the court faster and read the plays; forces me to make smarter shots at the net.”

It also helps that the two have grown closer off the court despite their geographical distances apart.

“Our families have fun on vacation together,” said Manna, “and we like hanging out doing other things that don’t always have to do with volleyball.”

“Our families have grown close,” agreed Ocampo, “which has helped to develop our friendship.”

Schmidt and Fulmer go 'the distance' at OVA Beach U15 finals