Sharone ‘awards’ the Pakmen banquet with his presence 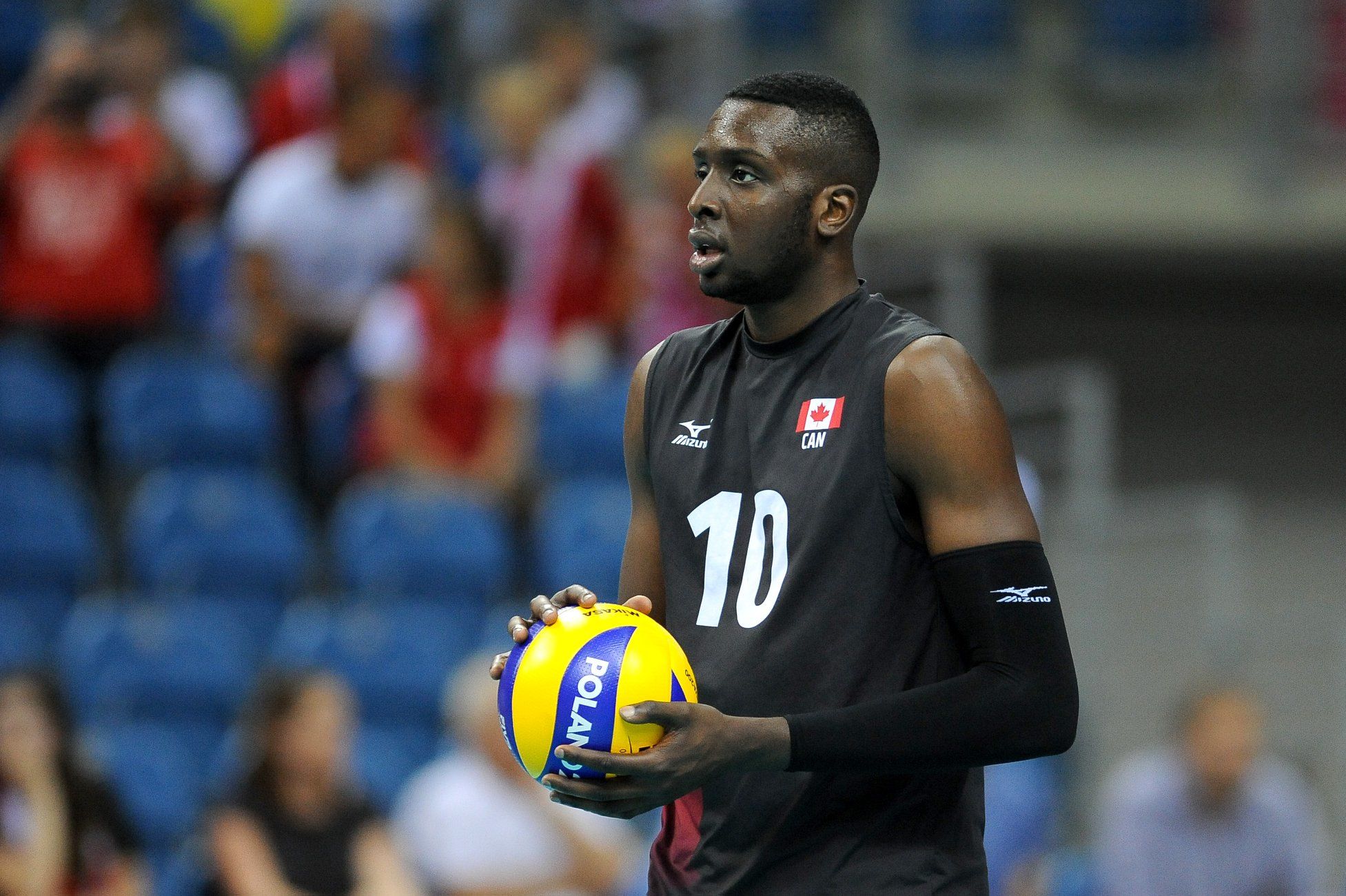 We all remember meeting our idol for the first time.

Agog at the opportunity to share the same rarefied air as the person you so adulate, a bit of stammering, fidgeting and sweaty palms accompanied with wide-eyed disbelief, is to be expected.

Sometimes that long-anticipated meeting can be emotionally deflating. Especially when your anticipation is met with tedium on the other end.

There were no disappointed faces among the 200 Pakmen players who had the good fortune to meet Sharone Vernon-Evans at the club’s first annual awards banquet at the Verdi Banquet Hall in Mississauga on May 24.

Imposing in stature, the 6-foot-9 Scarborough native was warm and gracious before a packed crowd who applauded his induction into the club’s Hall of Fame, along with the 2008 U18 Boys and the 2017 U18 girls, who won National team titles.

Vernon-Evans greeted many of the 350 players, parents and coaches in attendance, with warm smiles, and words of advice and encouragement that quickly melted away any anxiety some of the younger more impressionable youngsters may have felt.

Although only 19, Vernon-Evans has quickly added to his list of accomplishments since leaving the club two years ago to attend the Team Canada Volleyball FTC (Full-Time Training Centre). Highlights include leading the Canadian men’s Junior team to bronze at both the Junior NORCECA Championship and Junior Pan-Am Cup, followed by third-place showings with the Senior National team at the FIVB World League and NORCECA Championship.

Such accomplishments, with the Maple Leaf proudly emblazoned on his jersey, led to a two-year contract to take his talents abroad to Poland to play professionally for Canadian Team head coach Stéphane Antiga with ONICO Warszawa.

But Vernon-Evans is so closely tied to his roots that he made it a priority to attend the banquet despite having to come from Gatineau to accept the accolades.

“The people at Pakmen and the club in itself was always there for me growing up,” explained Vernon-Evans, “so I was glad that I could return the favor at their first ever banquet. Being there, felt like home, as Pakmen is like a family to me. I’ll always appreciate being a part of something so special.”

“Sharone is Pakmen! He bleeds Pakmen!” explained Pakmen President Kelly Smith about the magnitude of the night. “He has always been, and always will be, completely loyal. He appreciates what the club was able to do for him and he wants to give back to the club and our players.”

Although the Agincourt Collegiate graduate won’t turn 20 until August 28, Smith felt this was the appropriate time to honor their star product.

“We decided we should recognize Sharone early for our Hall of Fame as he is the best player to come out of the club thus far and one of the top players in the world at such a young age.”

For his part, Vernon-Evans felt it was imperative to give back to the club and its aspiring youngsters.

“When I was a beginner to the sport of volleyball, I definitely looked up to (Cuban star) athlete Wilfredo Leon. I studied his game, he was my inspiration!”

And, based on all the time Vernon-Evans devoted to an autograph session, those chances of inspiring are pointing up. 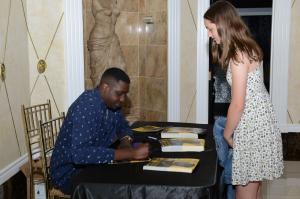 Armed with large player cards that the club printed up for the occasion, Vernon-Evans got out his sharpie and got down to work.

“He signed for everyone almost!” marvelled Smith of Vernon-Evans’ patience. “There were line ups for two hours and Sharone wrote a personalized message for each and every fan. I finally had to cut the autographs off as we were about to present his award and his wrist was sore.”

Before Vernon-Evans stopped autographing, club players Ghurmey Lama and Simon Loc Pham, both 13, spent some valuable time with him.

“Meeting Sharone was absolutely amazing!” said Lama, who is a student at Mississauga’s David Leeder Middle School. “I met him at Provincials and I was super excited. I’ve always watched Sharone on youtube when he used to play for Pakmen’s 18U team and he’s always been an idol as well as an inspiration for me.”

In possession of a personalized picture that read, “Ghurmey, I am proud to be a Pakmen when I see young talents such as yourself. Keep it up!,” Lama is even more excited about his volleyball future.

“I hope to be just as successful as Sharone himself and just keep pushing from here on out,” added the 5-foot-6 member of the 13U Gold team, who credits the club for its, “Absolutely great coaches as well as teammates. Pakmen is a very successful club and I will be sticking with this team for as long as I’m able to.”

Pham was just as exhilarated after meeting Vernon-Evans, describing the occasion as, “It was unreal to meet one of the most talented volleyball players in the world. He told me that if you stay committed and work hard, you will become a great player.

“He is very helpful, friendly and so tall!”

Like many of the other Pakmen players, Pham feels fortunate to have been around Vernon-Evans in the past, and he, for one, is not the least surprised at his meteoric success.

“I got to see him play at Provincials in the past, and witness his killer spikes and insane vertical, and I was sure he would go far in volleyball since back then,” said Pham. “He’s an inspiration because he’s proven that it is very possible for someone who has similar experiences as me, for example, playing for the Pakmen, that I can become a professional volleyball player. And, despite being one of the top players in the world, he is still humble and shows appreciation for the club that shaped him into the player he is today.”

“I forgot to ask Sharone how he deals with the fame and (how he) feels playing with the best players in the world?”

But, for now, Vernon-Evans will continue to convalesce from a broken tibia he suffered when playing for ONICO

What began as a pre-stress fracture in his left shin during a FIVB World League stop in Belgium with the National team last June, resulted in a complete stress fracture in February during an ONICO Warsaw match against Kielce. Now, four months removed from surgery in Poland, that required the insertion of a rod in his leg, Vernon-Evans is itching to get back into action after being cleared to practice on July 16. 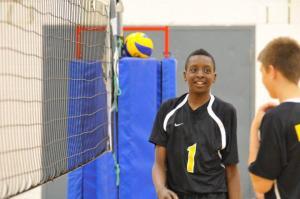 The opposite hitter is working out with the national men’s team in hopes of suiting up for the men’s world championships Sept. 10-30 in Bulgaria and Italy.

“I’ve loved being back on the court,” says Vernon-Evans. “I’m really excited to get back to competing in the near future.”

In order to compete, Vernon-Evans will have to participate in a week-long training camp in Slovenia in early September.

“It’s not confirmed whether I’ll be competing with Team Canada this fall,” admits Vernon-Evans. “In terms of this upcoming season, I’m very excited to return to Warsaw as an ONICO athlete.

“I received such a warm reception in Warsaw (last season)! Everyone made me feel welcome and comfortable in no time. A lot of the fans are so engaged, they’re truly a big part of the whole experience.

“I was really fortunate to spend the season in Warsaw. it’s just a beautiful environment.”