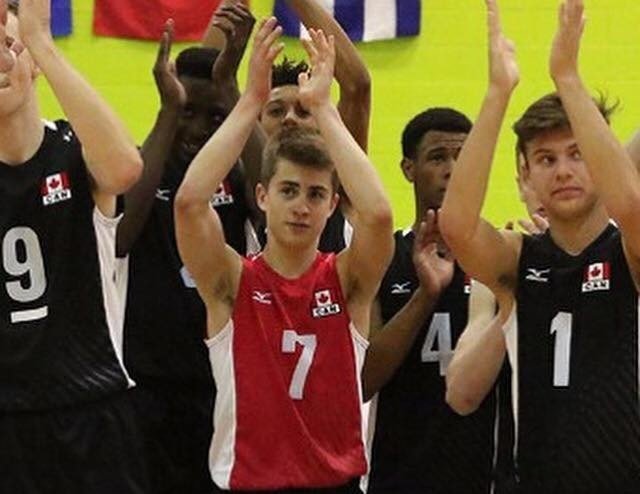 Jordan Pereira may not be tall in stature where volleyball players are concerned, but his reputation on the international scene is growing by leaps and bounds.

While he and fellow Pakmen grads Taryq Sani and Sharone Vernon-Evans helped Canada finish with a bronze medal and narrowly miss out on qualifying for the 2017 U21 Men’s World Junior Championships, slated for Brno, the Czech Republic, Pereira stood out individually being named the tournament’s Best Receiver, Best Digger and Best Libero.

Pereira, who Pakmen head coach Orest Stanko says makes “jaw-dropping” digs and has a “fearless attitude,” was the lone player to receive three awards, while Josh Tuaniga (Most Valuable Player and Best Setter) of the United States and Erik Flores (Best Opposite and Best Scorer) of Guatemala picked up two awards apiece.

For Pereira, who will team with Sani at the FIVB U19 Beach Volleyball World Championships July 28-31 in Larnaca, Cyprus, time never seems to slow down long enough to take in and appreciate the accolades.

Currently training for the beach championships in California, the 18-year-old Pereira took a moment’s breather to reflect on the honors bestowed upon him this past week.

“Winning those awards were very special to me,” reflected Pereira. “It shows me that I am on the right path.
“Playing against great teams like that really showed me where I need to improve. I have a couple of bad habits that I am continually working on to get rid of, and I have to keep working on my setting.”

“After losing to USA in the semis we were all very disappointed,” revealed Pereira. “There were tears shed after the game by our team. We bounced back well, though, and won bronze, and we still have an opportunity to qualify for worlds next year through a last chance qualifier.

“With the talent on our team we had the potential of beating (United States),” added Pereira. “But we just never clicked and made too many errors. We need to improve on every aspect of the game, but I would say the main one is staying disciplined at the net. We were a very young team so we have time to learn.”

Canada actually held serve with a 24-24 tie in the second set against the U.S., but couldn’t close it out to tie the match at 1-1. It was, however, a nice comeback from the opening set loss when Tuaniga, a NCAA second-team All-American at Long Beach State University, led Team USA as the left-handed setter served 14 consecutive points to set a tone.

Meanwhile Vernon-Evans led Canada with 11 points, all kills, from 31 attacks.

In the bronze medal match versus Guatemala, it was once again the 17-year-old Vernon-Evans who led the way with a match-high 13 points, followed by Sani’s 12.

“This is a huge stage for all of us,” Vernon-Evans told the media after the bronze medal match. “Not a lot of us have been to this level. It’s a big tournament, playing the Cubans and Americans. We had hoped to qualify, but this is not the end. We’ll do better next year. Next year is going to be better for sure. Once you’ve been there, the nerves are out.”

“I think our players now know what the international level is about,” chimed in Canada head coach Gino Brousseau. “They got to play the U.S. and Cuba. We told our players that this is just the beginning …(Saturday) night was a tough loss. I am pleased our players put away our performance and kept going forward. (Sunday) they managed well.”

And Pereira, Sani and Vernon-Evans hope to continue doing well after doffing their sneaks in favor of going barefoot.
After Pereira and Sani, who is 17, return from their tournament in California, the duo will train for a week in Toronto, before flying out to Cyprus, where they will be joined by Canada’s only other entry in the 54-team event, fellow Pakmen stars Vernon-Evans and Parvir Jhajj.

Pereira and Sani have played on the beach circuit for three years, also representing Canada in 2014 at the U17 Beach Worlds in Monterrey, Mexico where they reached the second round. Meanwhile, Vernon-Evans and Jhajj reached the bronze medal match, placing fourth.

Having graduated from Eden High School under the tutelage of his father and coach Albino in the spring, as well as graduating from the Ontario gold medalist and Canadian silver medalist Pakmen U18 team under the coaching of Stanko, Pereira will now set his sights on improving his indoor game under coach Dave Preston at McMaster University with the Marauders in October.
And, at McMaster, just like when he first joined the Pakmen and the Canadian team, Pereira will have the awkward first few moments of shaking hands with teammates, who were once considered enemies on the other side of the net.

“It’s kind of weird actually,” said Pereira. “Sometimes you end up hating someone because you are on different teams, but then you become teammates and meet them and you become good friends.”

In this case, it will be one-time rival, and Team Canada teammate Matthew Passalent of Hamilton, who will compete as a middle for the Marauders after playing left side for Canada.

Importance of Mental Imagery in Training for Volleyball