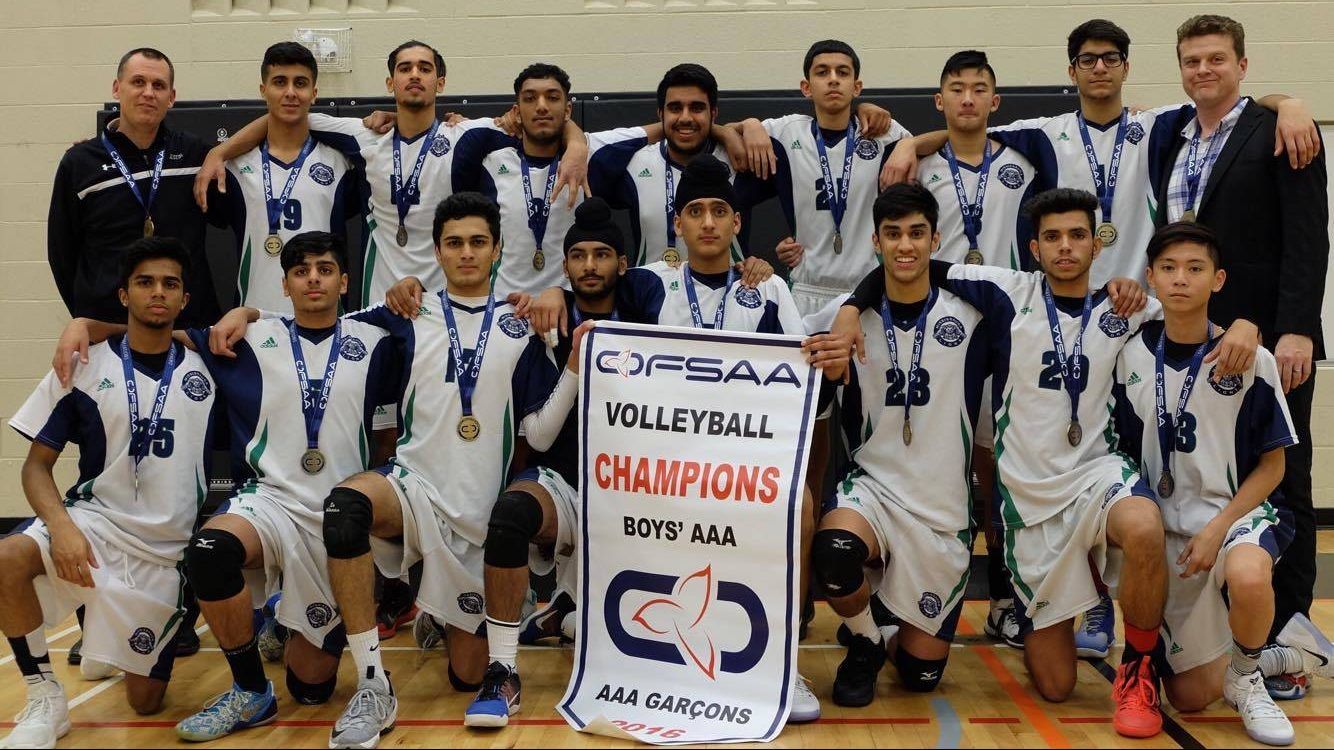 The Region of Peel has had an abundance of talented boys’ volleyball teams over the years, yet OFSAA gold has mysteriously eluded them.

So, when the defending Ontario Federation of School Athletic Associations silver medalist Mississauga Lions took to the court last week (Nov. 24-26) in Burlington against 19 of the best teams in the province, a large monkey was planted squarely on their broad shoulders.

Not since 1973 when the Glenforest Gryphons accomplished the feat, had a Region of Peel Secondary Schools Athletic Association team returned home with gold.

So before that primate could turn into a silverback gorilla for future ROPSSAA representatives to grapple against, the Lions freed those ROPSSAA demons defeating Barrie’s Eastview Wildcats in three straight sets, 25-23, 25-16, 25-19 to lay claim to the title.

“I am really proud of this year’s team,” said Lions head coach Brent Austin. “They are a special group of players.

“It’s astonishing that it has been 43 years since a Peel team has won an OFSAA volleyball gold,” marveled Austin when informed of the region’s historical shortfall. “It just goes to show you how difficult it is to win OFSAA. Peel has had many great teams in the past.”

And that gold medal came oh so close to being unclaimed yet again when the Lions took on Toronto’s York Mills Titans in the semi-finals. Mississauga dropped the first two sets 25-23, 25-19, before pulling off a dramatic comeback, winning 25-20, 25-18, 15-10.

“Before the match, I said to my assistant coach LLoyd Jones that this is going five sets,” revealed Austin. “I watched a couple of York Mills matches in pool play and knew they were dangerous.”
Those concerns were warranted when the team, “came out flat,” and didn’t seem to have an answer for the Titans, who were led by brothers, Cole, Xander and Trent Ketrzynski, who also happen to be members of the Pakmen. Cole and Xander with 18U Gold, and Trent with the 16U Pakmen Gold.

“For me, I think the turning point was near the end of the second set in a timeout when our captain Navreet Suhan took control and told the boys to play every point like it’s our last…..swing away and play defense.

“We lost the set, but I could see that we were getting back to the basics and playing some good defense. (Then) the momentum changed and we never looked back, winning the final set 15-10 even though we were down early, 5-2. I give credit to Navreet for staying calm and rallying the boys. He was the difference, demonstrating the composure needed to be a winner. (Exactly) what we want from our captains.” 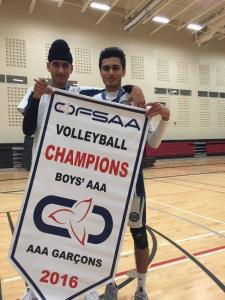 Suhan is certainly no stranger to pressure-packed tournaments. He, along with teammate Harnoor Grewal play for Mississauga Pakmen 18U Gold with Cole and Xander.
“Down 2-0, I could see it in some of their eyes,” said Suhan as he made a quick study of his surroundings. “I could see that sense of fear and that lack of hope on their faces. It was mentally, a tough spot to be in.

“We had not been dominated that drastically and trailed by such large margins all year long,” he continued. “It was the elephant in the room. None of the guys wanted to say it, but we knew in the back of our heads this may very well be it.

“Being the leader of this team I knew I could not fall back and hope for things to turn around in our favour,” explained Suhan. “I had to take immediate action and motivate the team. This is when I told everyone to stop what they’re doing and bring it in close. I demanded that each and every one look me in the eyes when I spoke, so they could feel my emotions. I assured the team that it was not over and that there was still a lot of volleyball left to play. I reminded them that we had faced greater adversity before in life because of who we are and where we come from. We have been beating the odds all our lives, and right now is no different. I reminded them of how we (fought back) in last year’s OFSAA semi-finals and how we can do it again, but we had to focus on one point at a time.

“I then took some time to myself where I recited a prayer and mentally calmed myself down. It was not until late into the third set when things really started to take a turn. We got some big stops on defense with strong blocks and huge digs, which really gave us the momentum looking forward into the match.”

And when the Lions finally realized they had accomplished their goal of returning to the school, city and region with the title, their was complete joy on the court.

“It feels great knowing that you have made history, for not only your school, but the entire Peel region,” said the Grade 12 student. “Coming into the tournament we knew what was at stake. We knew we had the chance to do something, which has never been done before, and this is what motivated us even more.

“Out of all the hardware I have won in the past couple of years this has to be the greatest,” revealed Suhan. “There was so much pressure for Mississauga Secondary to get that OFSAA gold, that we have always missed out on and to know that I am a part of the first to ever do it is truly an amazing feeling. Doing well for your school is always exciting especially at such a high stage with so many of your fellow peers and teachers supporting you. This OFSAA gold is something I will cherish for the rest of my life and I am truly grateful that I could have done it with my brothers.”
While this was the last kick at the can for Suhan, a long list of Lions will be back in 2017.

Also, Yashdeep Marwaha is a member of Pakmen 17U Black.

Closing out the list of Pakmen on the Lions is Zaid Shaikh, who competes for Pakmen 18U Black.

A Grade 10 member of the Lions’ team last year, Saad Shaikh could also lean on last year’s OFSAAs for experience when a comeback was necessary.

“This year’s semi-final was a copy of last year’s, when we went down 0-2 and came back to win in five,” explained Shaikh. “This year, against a strong York Mills team, we found ourselves in a hole. (But) from our experience, we knew we could come back and win. We believed in each other and, with a little bit of heart, we pulled through.

“The returning players knew we had to play hard and stay calm to come back. (And then) in the final versus a very strong Eastview team, we came out firing and established a 2-0 lead. We all knew the third set was gonna be the most important (after squandering a 2-0 lead last year against Agincourt Collegiate) and we had to treat it like a fifth set. With great coaching and leadership we dominated and won.”

“Last year’s loss in the final was our motivation for winning. We knew we had to get it done.

“I learned so much last year on the OFSAA silver winning team. I learned how to be a better leader and what it takes to compete at a higher level. I used everything I learned from last year to help ‘Sauga win its first OFSAA gold.

Shaikh, who has enjoyed his more than fair share of winning the past 24 months, felt a National title and an OFSAA title brought equal joy.

And with winning comes the bragging rights, which made Pakmen practices that much sweeter this week.

“There was a lot of talking smack at practice before OFSAA between the ‘Sauga guys and (Matthew Powell, Vikas Revendra and Gurnoor Bath of the) Marcies (St. Marcellinus) guys (on our Pakmen team). We let them know we won afterwards.”

St. Marcellinus concluded the championship with a hard-fought, quarter-final loss to Nepean’s Longfields-Davidson Ravens in the consolation round by the score of 19-25, 26-24, 23-25, 25-23, 16-18. In pool play, the Spirit finished 3-1 with their lone loss coming against York Mills.

“Our coaches, Mr. Austin and Mr. Jones did an amazing job,” concluded Shaikh. “They kept us motivated throughout the season and that really helped us accomplish our ultimate goal.”
To his credit, Austin had different challenges as a coach this year.

“The two teams are completely different,” when asked to compare last year’s and this year’s squads. “Last year, we spent most of the year finding ourselves. We were young (two Grade 10, and three Grade 11 starters), so we struggled for most of the season coming close in tournaments, but just not able to finish. However, at OFSAA, we came together and played like a team battling through the playoffs eventually coming up short. This year’s team was focused. Five starters returned and from day one their goal was OFSAA gold. The boys wanted it and it showed. They won for the first time in eight years the University of Waterloo tournament winning the final in three sets. They also took home gold medals in the Frank Hayden S.S. and Uxbridge S.S. tournaments never losing a set. They were perfect in ROPSSAA league play and playoffs. It was quite an accomplishment for them to finish the season undefeated with a record of 42-0.

And Austin points out, it’s that cohesion, which began last year, that makes this win so special.

“This win feels good because of the players,” he explained. “We won as a team — everyone contributed. — it was a total team effort. I am really proud of this group of players. We have had some really good teams in the past, but this team really bought in to the idea of a team first concept. No player was bigger than the team. I know this does not come around that often (as a coach) and I will remember this for the rest of my life.

“I think these boys will cherish this moment the rest of their lives. Not many athletes  can say they were OFSAA champs.”

And if the accomplishment hasn’t totally sunk in yet, it certainly will soon.

“We have not yet had any formal celebration as a school,” said Austin, “but I am sure something is in the works. (after all,) we have an OFSAA championship banner that needs to go up in our gym.

“We would also like to get out to our feeder school (David Leeder) to share in the celebration as this would not be possible without all the hard work that is done there promoting volleyball.”

The Role of Communication in Volleyball

Strength and Conditioning at The Athlete Matrix