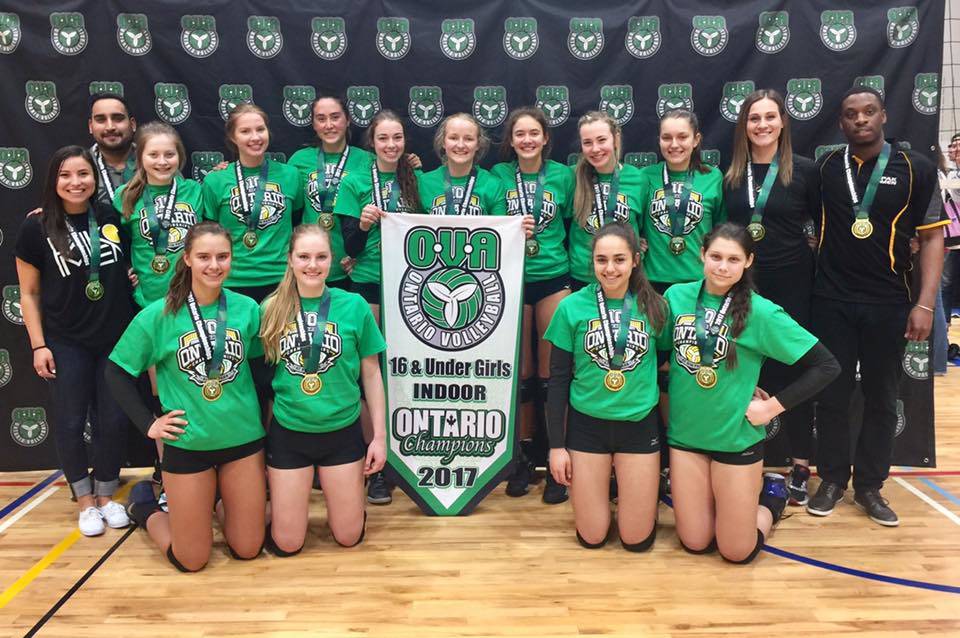 One of volleyball’s  many positives is there’s never a dull moment — nor an off-season.

When the indoor campaign comes to a close, there’s always the volleyball outdoor beach season to look forward to.

In the case of the Mississauga Pakmen 16U girls, the outdoor season allowed the players to turn the page on their dispiriting quest for a Canadian championship, after celebrating OVA Provincial gold a month earlier.

While the players took some time to reflect on what could have been, 11 of the 12 players didn’t dwell on the disappointing finish too long, instead, turning their attention to the sun, sand and a new volleyball outdoor beach season.

Perhaps no players head into the summer with as much optimism as Kaylee Glagau and Ava Mann.

As a tandem on the beach last year, Glagau and Mann swept the competition aside without the loss of a set at Volleyball Canada’s Youth Beach 14U Girls National Championships. And the duo is back for an encore. Members of the Team Ontario Beach Team, Glagau and Mann are also readying themselves for the 15U Provincials from July 29-30, 16U Provincials August 5-6, and the Beach Nationals August 18-20 in Ottawa.

Life on the beach has already entailed tipping their toes in both the Atlantic and Pacific Oceans during volleyball trips to Florida and California as they prepare for another go at Canadian supremacy.

Yet, in the recesses of their minds, Glagau and Mann still wonder, ‘what if’ in relation to the National Indoor championships May 5-7 when their Pakmen squad won all six of its preliminary round matches before an unexpected exit in the quarter-finals at the hands of Burlington Defensa.

“I think that at Provincials we were really tired of being the team, ‘with lots of potential that could be good’,” said the 6-foot-1 Glagau. “We were tired of losing to the (Halton) Hurricanes and them being the provincial champs for 13u, 14u and 15u. That day, and that weekend, we all showed up and decided to play the way we can and knew we could.

“After winning Provincials (in two straight sets against Halton) it was still unreal and took a while for the fact that we had actually won provincials to set in,” continued Glagau, who is a student at Mississauga’s Streetsville Secondary School. “Then Nationals were just around the corner, and now that we had won Provincials, I think we put a lot of pressure on ourselves to win Nationals as well. And when playoffs hit, we cracked and lost. In the end, I think that playoff game and the upset has taught me and my team a lot, never expect anything, and that we have to become a stronger mental team. I am still really proud of what my 16U teammates have accomplished this year and could not have asked for better teammates, coaches and club.”

Mann, who will return to Burlington’s Frank J. Hayden Secondary School in the fall, shared Glagau’s frustrations of constantly losing to the Hurricanes at Provincials.

“At Provincials I think we just all realized that we could beat Hurricanes because every time we played them, we lost by only a couple points in the third set. When we made it to the finals, and found out we were playing them, we were just all tired of losing to them and we came out our strongest.

“We were all very sad and mad about Nationals because we worked our hardest all season and knew we could win,” added the 5-foot-10 Mann upon reflection. “We can’t really make any excuses, but a reason I can think of, is experience. We’ve never been put in the situation where we were the No. 1  ranked team going into a tournament like Nationals.”

Head coach Kadeem Clarke agreed that the mounting pressure of being the No. 1 seed heading into the Eastern Canadian championships may have caught his players off guard, but he vowed that will all change next indoor season.

“Provincials wasn’t really a surprise because that was our goal the entire year and we worked extremely hard to put ourselves in a great spot to try and get that championship,” said Clarke.

“Nationals was a bit different. Our goal this season was to win both Provincials and Nationals, but the difference was that we felt way more pressure going in as the top seed. Dealing with that pressure was new to the girls and we let that pressure take over at the wrong time.

“The good thing about Nationals is that we learned from that experience and hopefully, we will come back next season a stronger team for it.”

Clarke was assisted by Lindsay Murphy and Jessy Satti.

Register for Pakmen Plus