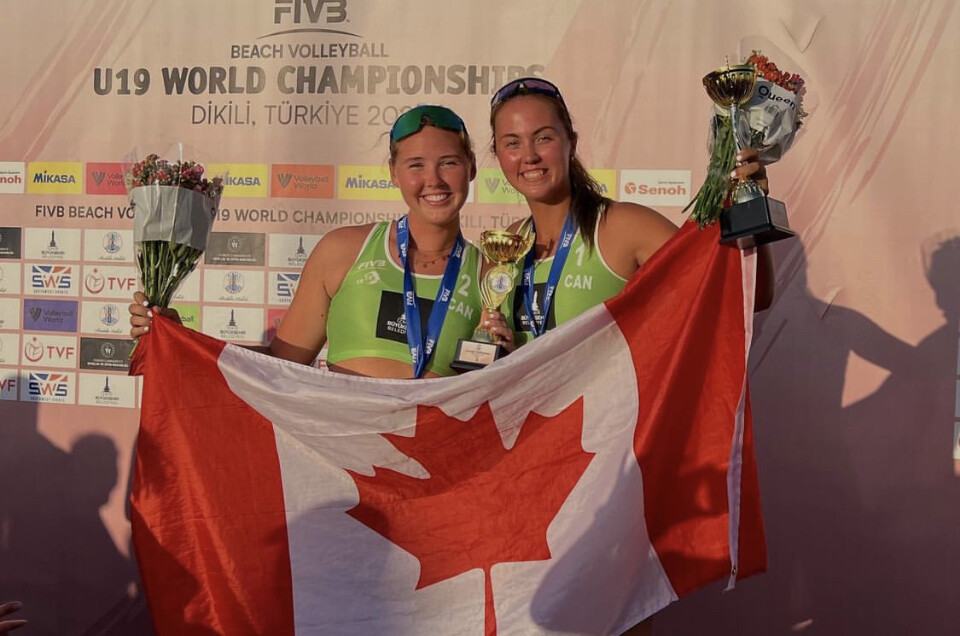 Every time sisters Emma and Kaylee Glagau step on to a volleyball court they have their parents to thank.

Kevin and Cathy Glagau introduced their daughters to the sport by enrolling them at Mississauga’s Pakmen Volleyball Club. A decade later after constant words of encouragement and from their parents, Emma and Kaylee are making national and international headlines with their exploits.

Last week (Sept. 14-18), it was Emma’s turn to seize the limelight with a stellar performance at the FIVB Beach Volleyball U19 World Championships in Dikili, Turkey. 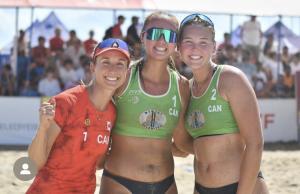 With Scarborough’s Ruby Sorra by her side, the 17-year-olds took on 47 of the globe’s best teams representing 38 countries and persevered to capture bronze medals. Glagau and Sorra were able to pick themselves up off of the sand after a disheartening 2-1 (27-25, 17-21, 17-15) semi-final loss to Americans Myriah Massey and Ashley Pater to defeat fellow Americans Sophie Kubiak and Bailey Showalter 2-0 (21-10, 21-16) a few hours later.

“I think looking back on such a close (semi-final) that didn’t end up going our way, I’ve learned that it is so easy to reflect on every point I messed up and wish I did better. After losing such a close game, I know there were many opportunities I wish I could go back to, but I also felt that I took some risks that I am proud of, and can only hope that next time those risks will pay off.”

Glagau believes it was the come-from-behind 2-1 (13-21, 21-19, 15-12) quarter-final victory over Poland’s Malgorzata Ciezkowska and Urszula Lunio that was pivotal in their bronze medal finish.

“I think that our game against Poland is probably one of the most memorable games I’ve ever played,” said Glagau. “We got crushed in the first set, and things still weren’t looking good in the second, when we were down 9-12. At that point Ruby and I realized we had nothing to lose, so we started taking higher risks and playing more aggressively. Eventually, with a whole lot of faith, we pushed it to a tie-break and kind of took off in that set. After that win, it was just a huge lesson to me to keep having faith and trust in the process. And honestly, I think the semifinal loss was also a huge battle, but like I said, the same high risks we took didn’t pay off like it did in our quarter.”

And Glagau’s life as a volleyball player is just starting. After graduating this year from Streetsville Secondary School, Glagau will attend Texas Christian University in the fall to play beach volleyball. She will be following in the footsteps of her sister Kaylee, three years her elder, who earned a scholarship two years ago in Hawaii.

“I considered joining my sister in Hawaii and was debating between that school, another school, and TCU,” explained Emma. “In the end, I felt TCU was right for me because I fell in love with the campus, coaching staff, team culture, and facilities. It was a combination of those things, along with a simple feeling I had during my visit there, that TCU is where I am meant to be that had me commit there.”

While Emma may put down stakes 3,500 miles away from her sister, there will always be that strong bond and friendly competition the two share.

“Kaylee ended up playing the sport because our parents put us in Pakmen programs when we were young. Then, Kaylee simply wanted to try out for the rep team because she thought she liked it and she was tall. She ended up falling in love with the sport and pursued it. I basically only started playing volleyball because of Kaylee; at that young age I just wanted to be like her and copy everything she did. Obviously I ended up falling in love with the sport too, and here we are!

“I think the word rivalry is a pretty strong word to use, but I would definitely say that we motivate one another to do our best. We have always encouraged one another and supported each other’s journeys and accomplishments, but if we ever play against each other… It is definitely an intense game.” 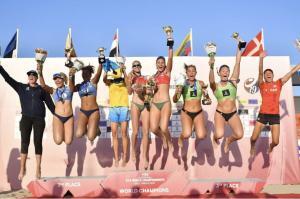 When Emma arrives at Texas Christian, she will have some catching up to do with 6-foot-2 Kaylee, who was an American Volleyball Coaches Association three-year honor roll student in her Sophomore year and teamed with Brooke Van Sickle to be named the Big West Pair of the Year.

Emma won’t see as much of her friend Ruby either. Sorra is graduating from Scarborough’s Birchmount Park Collegiate and will attend California’s Stanford University in the spring.
But chances are Emma and Ruby will join forces down the road to represent Canada internationally.

“Ruby and I have known each other for about four years now, and have been partners for just as long,” said Emma. “Our parents are actually the people who paired us together. I think they saw our potential together before we did. I think what makes us such a successful team is our shared competitive drive, and the fact that our personalities complement each other well because we are both very different.”

While competing internationally with Sorra, Glagau has developed a great appetite for travel. Volleyball has taken them to Austria, Greece, Italy, Portugal, Thailand, where they placed fifth at last year’s worlds, and Turkey.

“Honestly, travelling can definitely be stressful and tiring at times, but there is absolutely nothing better in my mind than getting to learn and experience so many new cultures around the world,” said Glagau. “I am so blessed to be able to pursue my biggest passion (volleyball) while also getting the opportunity to travel the world and see and experience so many things that most people wouldn’t. I definitely take it for granted at times, but travelling is something I am forever grateful for.”

Until Glagau graduates from Streetsville, she will continue to bestow her knowledge on the volleyball stars of tomorrow at the Pakmen Volleyball Club where club founder Kelly Smith brought her in to help out.

“I’ve been a coach at Pakmen for two years now and I absolutely love it,” said Glagau. “I love working with all the other coaches and having the opportunity to teach the next generation about volleyball and get to know so many kids. Coaching with Pakmen has taught me to trust the process and stay patient, especially in my own game.”