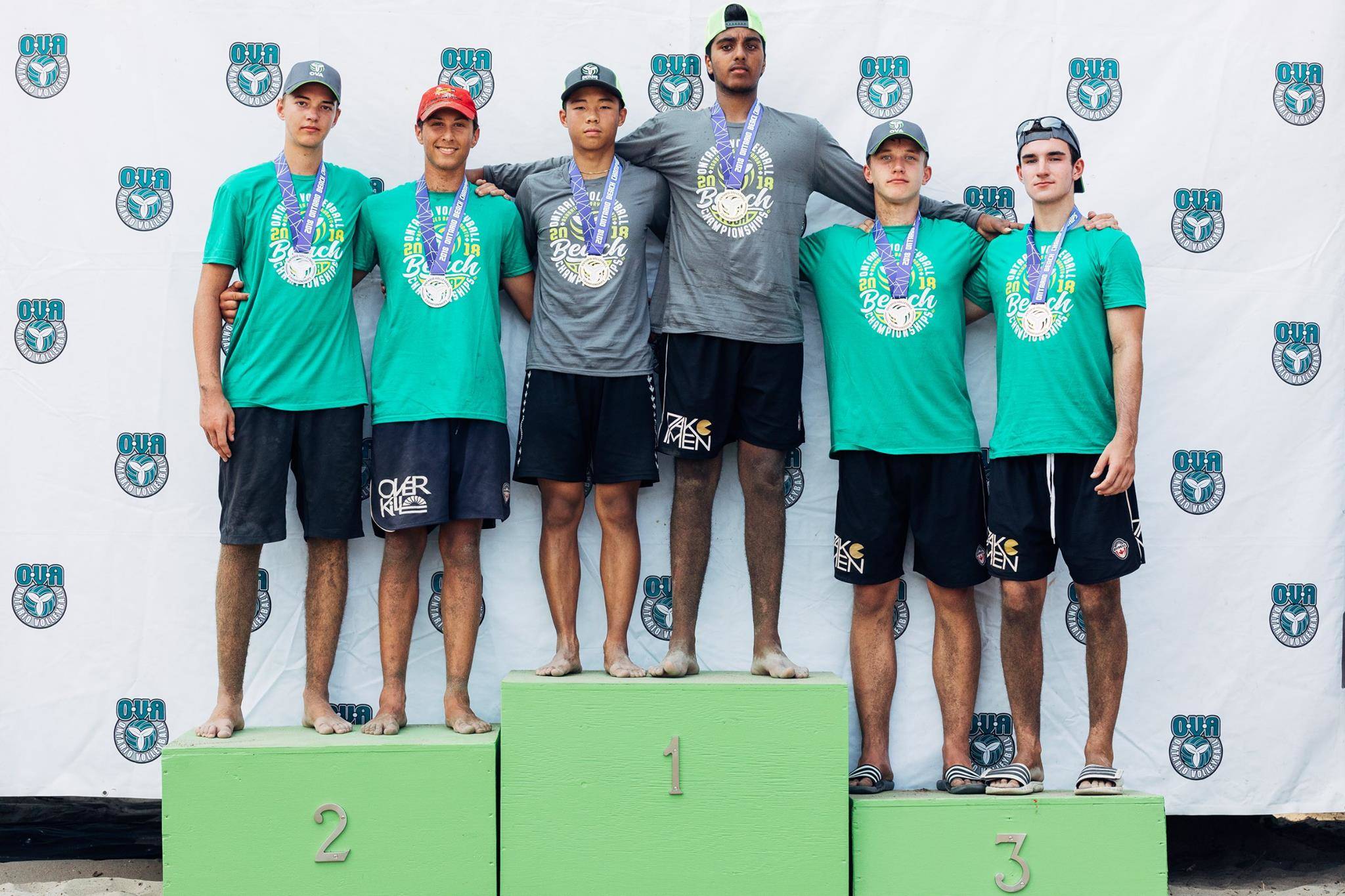 Harjas Chahal and Jamie Ha may be three-time OVA Beach Ontario champions, but the challenge never seems to get any easier.

Taking on the province’s top 16U teams at Toronto’s Ashbridges Bay August 4-5, the Pakmen duo was extended to the maximum three sets in all three of their playoff matches before prevailing.

Surviving scares against Pakmen teammates Kevin Leo and Davis Young in their quarter-final matchup and Owen Jacobs and Alex Szolno in their semi-final battle, Chahal and Ha mustered enough strength and stamina under 30 degree temperatures to defeat Jason Cazes of Galaxy and Lyam Krapp of London Storm, 21-15, 14-21, 18-16 to take the top spot on the podium.

Asked what separates them from the competition, the 15-year-old Chahal from Mississauga Secondary School keyed in on three aspects.

“Being able to perform under pressure, our communication in calling our shot and block and lastly, our effort level to play every ball in every rally and game,” said the 6-foot-3 Chahal.

For his part, the 16-year-old Ha from Mississauga’s St. Marcellinus Secondary, put his finger on familiarity as well as being jacks of all trades.

“Harjas and I are a great team because we are both all-around volleyball players. Therefore, we don’t have many weaknesses for other teams to take advantage of. Also, Harjas and I have good chemistry because we have been playing together since Grade 8.”

And, not to be forgotten, is the invaluable input from Pakmen beach volleyball coach Jessy Satti.

“Coaching has played a big part in our success,” added the 5-foot-7 Ha. “Jessy has taught us a lot of valuable skills that we apply during tournaments. For example, blocking and peeling. In addition, Jessy always comes to Provincials to help remind us what we need to do if we want to win.”

Satti agrees that experience under pressure has been beneficial to Ha and Chahal repeating as gold medalists.

“Harjas and Jamie have been partners for three years now, and they’ve won Provincials all three years,” said Satti. “They have consistently been the best team in Ontario, and its certainly helped that they train together every day.

“I wasn’t surprised with Harjas and Jamie,” added Satti, “They are a championship team and they have been for years. They were clean and sharp all weekend.”

Satti was, however, delighted with the play of Jacobs and Szolno.

“Alex and Owen have been training really hard all summer,” explained Satti. “They have an aggressive style of play and they are both very physical so they can play at a high level no matter what the playing conditions are like.

“However, Alex and Owen had a rough practice leading up to Provincials and they were definitely frustrated with themselves. I think they used that frustration (to their advantage) and came out playing strong all weekend. It was the best version of them that I’ve seen. They played with energy and confidence. It was just unfortunate that both teams had to meet up in the semis.”

Both Chahal and Ha were in full agreement.

“One of the toughest matches was our semi-final against Owen and Alex, because we had to come back from losing (15-21 in) the first set and during that time the heat was challenging to play in,” explained Ha, about the match they eventually won by 21-18 and 15-12 scores.

“That match against Jacobs and Szolno was more difficult than expected,” concurred Chahal. “We would have a close game in past matchups against them, but it would be done in two (sets) for Jamie and I. But at Provincials, they were at the peak of their game, which is what I’d expect from them in such a big game.”

“I was very apprehensive going into the quarter final against Young and Leo because they were always a team that we were very close with throughout the year, in both tournaments and practices. So, in having to play them in the quarters in the first game of the day, Jamie and I knew that we would have to be at our top, otherwise we would not make it through.”

And, it was because of the tough matches Chahal and Ha had to survive leading up to the final, that Ha had his reservations.

“Our final match against Lyam and Jason was tough, because Harjas and I were really tired from playing six sets before our match.”

Teammates in both indoor and beach play for three years, Chahal and Ha will now turn their attention to the Nationals, which they won as 14-year-olds, but passed on last year.

And whether the temperatures tail off before the Nationals, coach Satti says all his teams will be prepared.

“It was extremely hot, but this whole summer has been like that,” he said. “These guys got used to training in extreme heat, so I’m not surprised they played well under those conditions. A lot of guys will take practices off if it’s too hot, but Alex, Owen, Harjas and Jamie always show up to practice and work hard.

“(In beach), guys usually pair up with like-minded individuals who have the same goals as them,” said Satti. “Both pairs are a perfect match, they complement each other well. Not only with their playing styles, but also with their personalities.”

Being like-minded has meant Szolno, 16, and Jacobs, 15, have thrived spending extra time working on their game together this summer.

Indoor teammates the past three seasons, along with Ha and Chahal, the four were part of a 16U Pakmen squad that won silver at the indoor Provincials and bronze at the Nationals.

“The reason we’ve been so successful (in beach) is because we’ve been persistently training together more than ever this season,” said the 6-foot-2 Szolno, a student at Our Lady of Mount Carmel in Mississauga. “We understand each other as partners better, and we know each other’s strengths and weaknesses more clearly. Our communication has improved dramatically as well.”

That improved communication helped give Ha and Chahal fits in the semi-finals and allowed them to prevail 21-15, 21-18 in the bronze medal match against Markus Hong and Ethan Hendriksen from Forest City VC.

“Our toughest match was against Harjas and Jamie,” said Szolno. “We came short of the gold medal match by three points, but the loss didn’t bring us down and we kept our composure and eyes on the prize, the bronze medal.”

And, certainly an improvement on their 14U year when they lost in the quarters, and, their 15U season, when their faltered on the first day of play before fighting back and winning the Tier 2 title.

“This year we were both very committed to giving our all on the beach,” said the 6-foot-1 Jacobs, who attends Mississauga’s St. Marcellinus. “We were very happy to come out of the Ontario Championships with a bronze medal.

“I enjoy playing with Alex,” added the setter, “because of the amount of energy he brings. He is very dependable and pulls out big plays in close situations. We are both very competitive and do whatever we can to win our matches.”

It will be interesting to see how far that takes the three Pakmen sides at the upcoming Nationals August 16-18 back at Ashbridges.

Jeff Chung to Coach u11 Girls