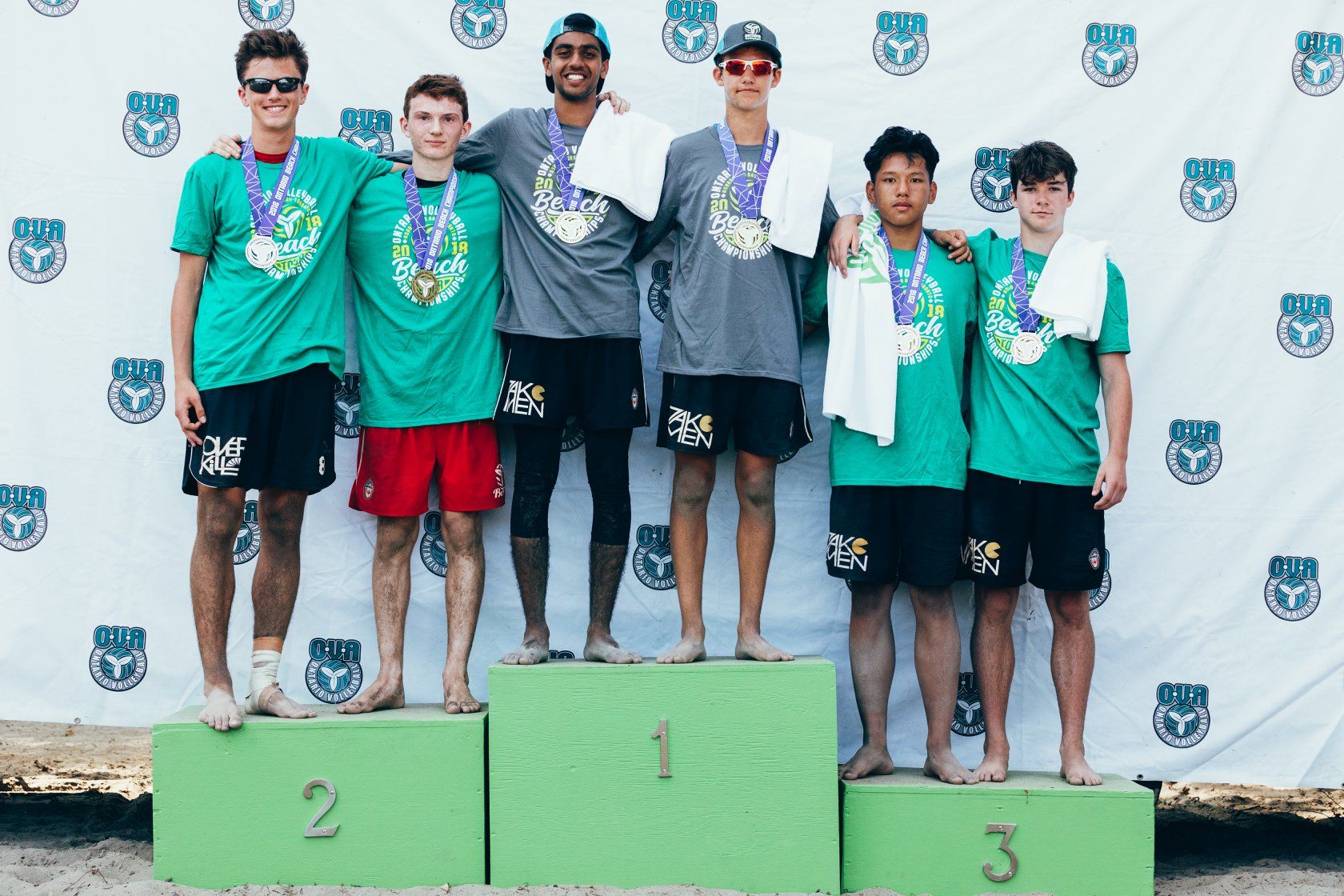 Kenneth Mann and Punit Shah’s quest for gold at the OVA Beach Ontario Championships was fraught with peril.

Taking on 28 of the top U15 Boys’ teams in the province at Toronto’s Ashbridges Bay from August 11-12, Mann and Shah realized their quest for gold would have to go through their mates from Mississauga Pakmen.

And, while Mann and Shah averted playing bronze medalists James Lam and Payton Travers, they did have to prevail over indoor teammates Matthew Rugosi and Uzair Shaikh in the semi-finals.

When the last drop of sweat was expended on the sands of Ashbridges beach, Pakmen teams claimed three of the top four placings with Toronto’s Liam Rocheleau and Iain Panagiotou preventing a sweep.

“Our toughest matches were our semis and our finals,” said the 14-year-old Mann, who attends Burlington’s Dr. Frank J. Hayden Secondary. “We knew the semis against Matthew and Uzair was going to be a challenging match because  they are fierce competitors. In the end, we prevailed by executing our game plan and being the louder team on the court.

“(We also knew) the final was going to be a tough match because we were playing a team (in Rocheleau and Panagiotou) that we had not beaten all summer,” added the 5-foot-11 Mann.  “We knew we had to be mentally tougher than them and we had to exploit their weaknesses.  We (also) knew we had to be aggressive with our serves and smart with our shot choices.We prevailed by getting off to a strong start and not letting them come back.”

“I think that we were expecting a podium finish, at least,” said Shah, 14. “We had trained so hard, so we felt that we owed it to ourselves. Despite Kenneth and I being skilled players, we feel that our mental game, ultimately won the tournament for us.

“We feel that we played the best volleyball we have ever played, that weekend. We were hitting our shots, and our (mental toughness) never shifted.”

No wonder that the two plan to continue improving together as a unit.

“We have been a team for two seasons now, and we are planning on making it three next year,” said Shah, who resides in Mississauga, but attends Turner Fenton Senior Public School in Brampton.

“I think that Kenneth and I are both quite strong in quite a few aspects, however, I feel that we shine in different areas more that others,” added the 6-foot Shah. “Kenneth is an excellent defender, who can read the game very well, and is quick on his feet. Furthermore, I feel that my blocking is working well. This brings a good balance, as we are both quite good at hitting our shots.”

“I think our strength is that our styles of play complement each other,” added Mann. “We always try to stay positive and focus on what we are doing well at the time. We always have a game plan and we try to execute it to the best of our ability.

“There are always areas to improve on,” continued Mann. “Right now we are trying to listen to each other more on the court so that we are able to hit more accurate shots.”

Meanwhile, Pakmen Black teammates Lam and Travers managed to reach the podium by finishing first in their pool, before defeating Dalton Irwin and Arthur Bento 2-0 (21-16, 21-7) in the quarters, losing 2-1 (21-13, 17-21, 9-15) to Rocheleau and Panagiotou in the semis, and defeating Rugosi and Shaikh for the bronze medal.

Lam, a student at Mississauga Secondary, adds he and Travers click on the beach because of their friendship that only grew stronger playing together during the indoor season for Pakmen Black.

“We have been teammates since the start of our 14U season and what makes us so successful is the strong connection between us,” says the 5-foot-10 Lam. “We are both looking towards the indoor season.”

“Since the very first season we played indoor together we have been really close and great friends,” concurred Travers, “So it makes it a lot easier playing with your buddy.

“What makes James and I a good team is that James is a big blocker and very big at the net, while I’m good at defending and very fast in the back court,” added the 5-foot-9 Travers, who attends Oakville Trafalgar Secondary. “With James blocking (and me in the back court) it makes it really hard for other teams to get around me and James.

“Our playing styles are a tad different. James’ is more of a power game, but he also has a very technical side to his game capable of hitting really nice shots. As for me, I’m more of a finesse player. I go for shots and find the open court rather than bouncing every ball like James. But I can also swing hard at the ball (at times) and get a couple bounces.”