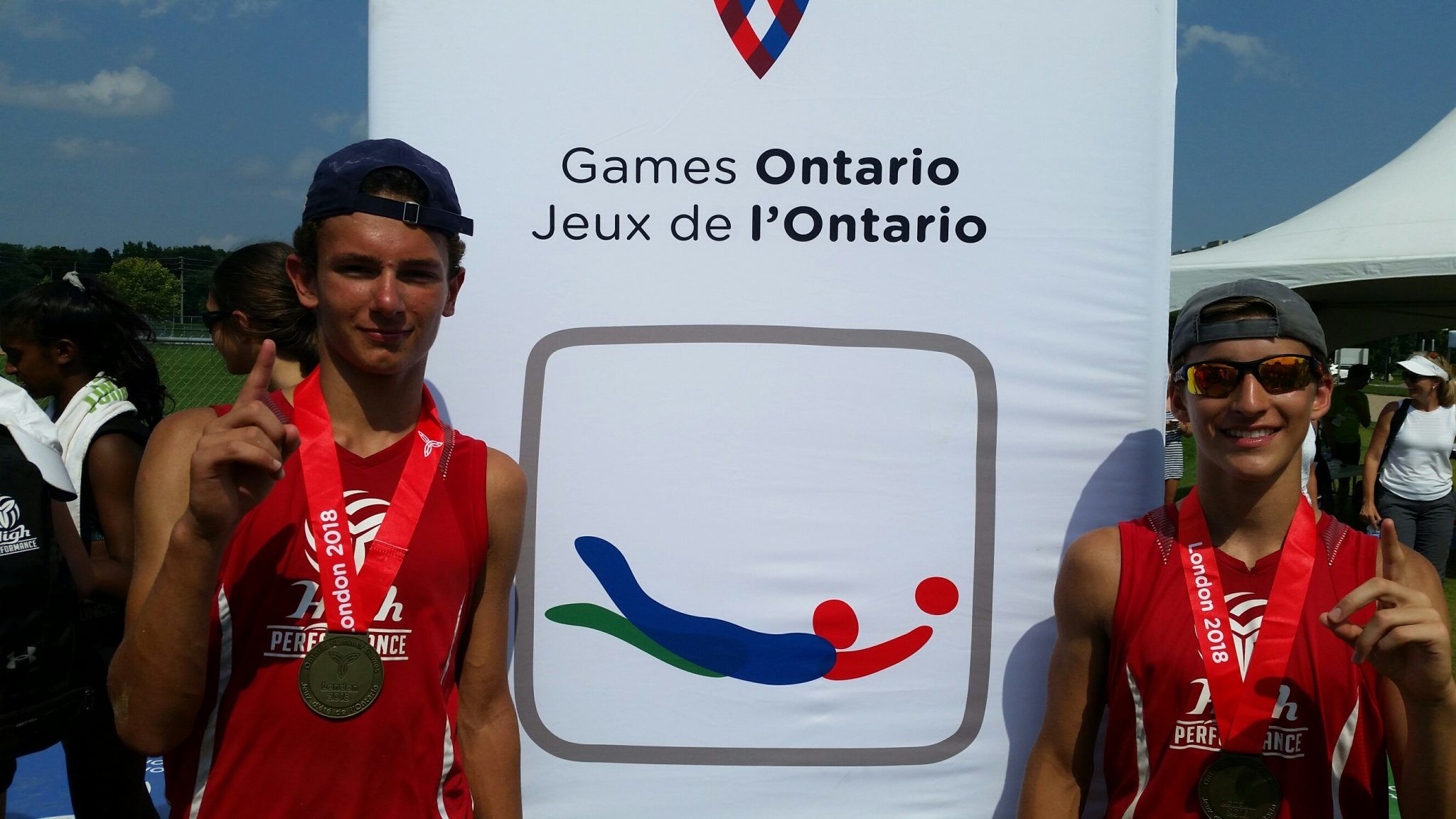 Mississauga Pakmen had a hand in winning both the boys’ and girls’ U16 gold medals at the Ontario Summer Games in London from August 3-5.

Nathan Dunne and Matthew Rugosi swept Jack Sutherland and Matthew Killeen in straight sets 21-9, 21-12 to win the boys’ title, while Josephine Sek teamed with Ava Khademi of Aurora to win the girls’ gold medal in three sets over Carlie Pappano and Joelle Horner, 21-7, 17-21,15-13.

“Pool play was a lot closer because Nathan and I were still adapting to each other’s playing styles,” explained Rugosi. “But once we got used to each other, we started playing smarter and more aggressively.”

“Matthew and I worked hard the whole time and kept pushing each other to achieve the impossible,” said Dunne. “We also get along and keep each other positive and very loud with a ton of energy. We filled in where each other had weaknesses and devised, as a team, a perfect game plan and stuck to it. That way, we were always on the same page and knew what each other wanted and where they were going to be.”

“The (semi-final) was the highlight of the tournament because all three sets were very close,” said Rugosi. “Anthony and Ben were smart players and tried for every ball.”

“We knew going into it that the game wasn’t going to be easy, not only from playing them in practice but also from scouting them out,” said teammate Dunne. “This was definitely a very close game. after the match was over both the players and coaches, from each team, thought that the game just played could have definitely been a finals.

“(The semi-final) was a game of runs,” added Dunne. “Not only getting on a run, but knowing when and how to shut down a run by either calling a time-out, or trying a two ball, unorthodox play. The difference between us winning or losing had to be the attitude and mental game. Instead of getting down after we lost a very close second set and going down in the third 0-4, we called a time-out and got refocused and right back to business.”

“What separated Nathan and I from everyone else was that we were both equally mentally strong and had a never give up attitude and that is why we won all of our third sets,” said Rugosi.

Unlike the semi-finals, the championship match against Sutherland and Killeen proved anti-climactic holding their opponents to a total of 21 points over two sets.

“Jack and Matthew were very tired, which helped us. But we also didn’t step off the pedal and kept pushing hard not letting them get a break,” said the 6-foot Dunne from Brampton, who attends Applewood Heights Secondary. Matthew and I kept them moving forward and backward keeping them out of breath, which helped us a lot. We were working smarter, not harder.”

Entered as the No. 3 seeds, Rugosi  and Dunne felt good about their chances after a strong week of preparation.

“We formed a good connection and got better together and thought we stood a chance at winning,” said the 5-foot-7 Rugosi, who attends Bishop Allen in Etobicoke. “We kept our A-game on the whole time even through the heat.”

Sek and Khademi, who entered the tournament as the No. 1 seeds, had the rare experience of facing the same team to open the tournament, and to close it.

Not only did they meet Pappano and Horner for the gold medal, the two teams also matched skills in the tournament opener, this time winning 21-14, 21-14.

“We both saw playing them again as an advantage because we found it easier to come up with a game plan,” said Sek. “For example, who to serve to and their tendencies.”

Sek was just thankful that she and Khademi were still playing after a scary battle in the semi-finals against Tia Shum and Rachael Capasso in which Sek and Khademi lost the opener 21-7 before bouncing back to prevail 21-12, 17-15.

“In our semis I feel as if we weren’t ready to compete,” admitted the 5-foot-7 Sek. “Tia was picking up a lot of my shots and it made me start doubting myself. This resulted in a lot of errors. The next set we got a fresh start and we were more aggressive with our attacks. We stayed consistent the rest of the match.”

“Ava and I officially met this year at Region 5 tryouts,” revealed Sek. “We played one OVA tournament together before the Summer Games, and other than that I just saw her at Region 5 practices. I think our personalities complement each other because we are both positive and hard working on the court. We also feel the same commitment and love for the sport. We know how to help each other when one of us is struggling.”