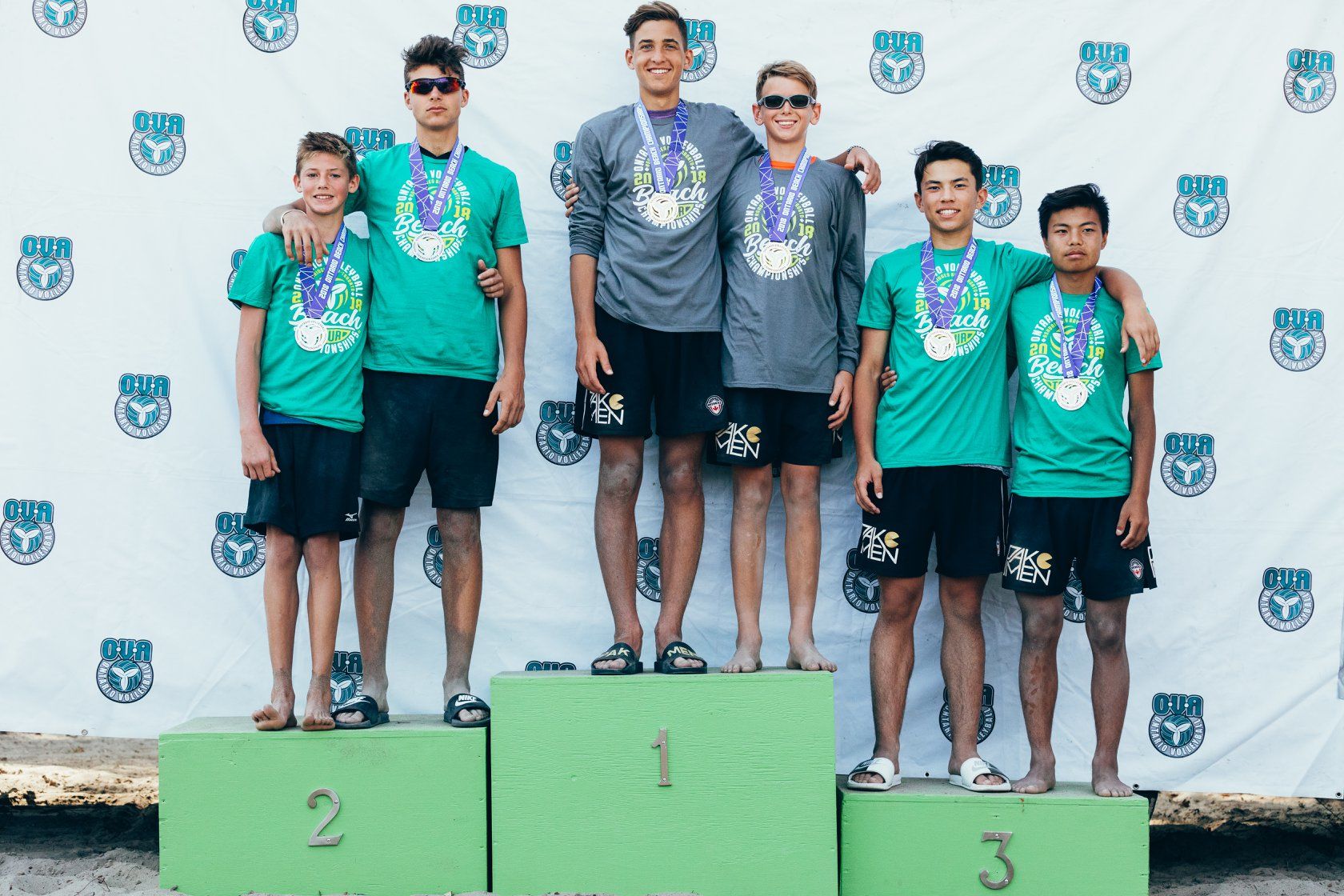 They may have been the OVA Beach Ontario Championships, but in many ways, the U14 Boys’ division had the look and feel of a Pakmen practice.

Competing against 19 of the best teams in the province at Ashbridges Bay August 11-12, Pakmen tandems captured four of the top five placings, with Kaden Schmidt and Nikola Mitrovic prevailing to capture the gold.

Schmidt and Mitrovic survived first set losses to Pakmen teammates Tyler McBride and Owen Mellon in the quarters and Nathan Ha and Jacob Nowak in the semis, before sweeping aside the team of Ethan Eiselt-Rolfe and Peyton Fulmer 25-23, 21-16 in the final.

“I didn’t consider any of the matches easy, but I definitely found the quarters and semis the most challenging, as we went up against our fellow teammates, who are very strong individually and even stronger together,” said Mitrovic. “As tough as those matches were, they were also the most fun to play, as we were constantly pushed and had an enjoyable atmosphere.”

“Our toughest matches were the quarters and semis against other great Pakmen teams,” concurred Schmidt. “The boys are great athletes individually, and as a team they are strong as well. We all had the same training (under beach coach Jessy Satti) and knew each others’ abilities before the games started.”

After finishing first in their pool and receiving a bye through to the quarters, Schmidt and Mitrovic rebounded from a 21-11 defeat at the hands of McBride and Mellon to rebound for a 21-13, 16-14 victory.

“We were coming in ranked first, so I thought we had a good chance of winning,” said Schmidt, who won the U13 title last year at Provincials with a different partner. “But there were teams that we played that were strong and some games were tight. Competition was great. So we had to play our best to get to the finals.”

While this was Schmidt’s second consecutive beach title, this was Mitrovic’s first taste of the outdoor game.

“This is our first year together, and my first year playing beach volleyball,” said the near, 6-foot-3 Mitrovic. “I joined Pakmen this year and I just wanted to play beach volleyball, so when Kaden asked me to be his partner at one of our practices I was thrilled.

“Kaden is an extremely good defender, and he reads the court really well.,” added the Niagara Falls resident, who will attend AN Myer Secondary in the fall. “Though he is smaller, he jumps high, hits hard, and knows how to read the court well. We communicate very well, and are always smiling and having fun on the court. My strengths are hitting and blocking as I am taller and have an advantage at the net, and I’m also a pretty good passer.”

Schmidt adds the chemistry is certainly there between the two.

“Nik and I complement each other,” said the 5-foot-8.5 Schmidt out of Mississauga, who will attend Toronto District Christian in the fall. “We have fun and are passionate about the game. We are also committed about getting better as a team. Our communication is strong too. I see Nik’s strength as being tall and he also has awesome ability to pass. He’s a great hitter and has amazing blocking ability. I think I’m pretty good at defending, hitting, setting and serving with a never say die attitude. I think, as a team, we have a great work ethic and never give up even when we’re down in a game.”

Like Pakmen teammates Schmidt and Mitrovic, Ha and Nowak also finished first in their pool giving them an automatic bye into the quarters.

There was nothing simple the rest of the way for Ha and Nowak, who managed a tough 16-21, 22-20, 15-8 quarter-final win over Daniel Hershtynovich and Jackie Lu.

“We came into the tournament ranked fourth, which meant we would have a fairly easy pool compared to other teams,” said Nowak. “We also knew being ranked fourth would mean playing a challenging quarter-final, followed by a difficult semi-final.

“Quarter-finals was challenging in a sense because we had to play (Hershtynovich and Lu) from Thundercats who we had previously lost to. So, there was a lot of pressure, because we knew we had to play well to proceed. We lost the first set and were behind in the second 16-20, but we didn’t let that get to us, and we won six straight points to win the second set and then, the third.”

Unfortunately for Nowak and Ha, they couldn’t close out their semi-final against their indoor teammates after taking the first set.

Still, the 6-foot Nowak, who will attend Toronto’s Bishop Allen Academy in the fall, knows he and Ha have better days ahead.

“Nathan and I are good friends and get along on and off the court. Our team is very well rounded, meaning sometimes we can switch up who is blocking and who is defending and we both are great offensive players.”

Reasons Ha and Nowak thought they had a chance to the end.

“I was pretty satisfied with bronze,” said Ha, 14 out of Mississauga’s David Leeder Middle School, “but I thought we definitely had a chance at gold.”

The duo will have to settle for an attempt at a second straight gold in indoor play beginning in the fall with teammates Schmidt and Mitrovic.

Rounding out the top placings in U14 play, Pakmen’s Kal Marion and Adam Shapcott placed fourth, while the groupings of McBride and Mellon and Marco Ceolin and Airen Torres tied for fifth.