Pakmen’s Success Is a Tale of Seven Cities 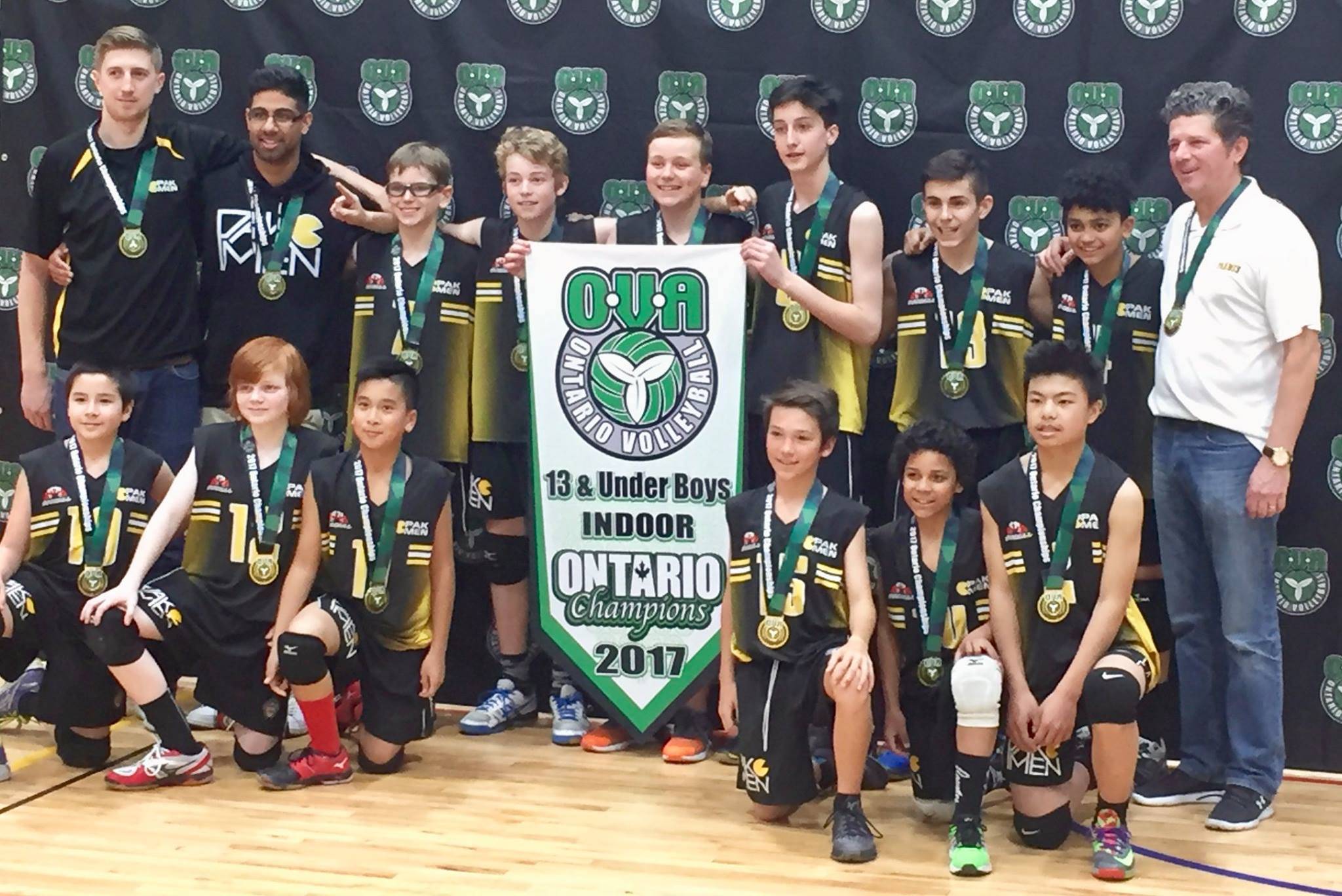 What do Milton, Oakville, Mississauga, Etobicoke, Hamilton, Woodbridge and Orangeville have in common?

They all had a share in capturing gold at the Ontario Volleyball Association 13U Boys’ Provincial Championships at Waterloo’s RIM Park April 7-9.

Players from each of the seven cities contributed mightily to the Mississauga Pakmen Volleyball Club‘s efforts under the leadership of head coach Niko Rukavina, who oversaw a meteoric rise in play as the season for these volleyball club neophytes progressed.

“Winning is a very sweet feeling for 13U, but it was not a focus of ours throughout the season,” revealed Rukavina. “We tried to develop a growth mindset in getting better every practice and every game. If we worked hard individually, and as a team to get better, then the results would speak for themselves.

“I am incredibly proud of this group of athletes,” added Rukavina. “We had 12 players who, at any time, could step on the court and compete. Us winning provincials was a testament to our depth and our team culture.”

Speaking of results, the Pakmen won eight of their nine matches with their sole defeat coming against the Kitchener Waterloo Predators Purple in the final match of pool play.

“With our team consisting mostly of 11-13 year-olds, the emotions in a game of that magnitude can run very high,” explained Rukavina of the roller coaster ride his players journeyed on against Aurora. “We had a team motto all year of ‘next ball’, where we tried to focus on the next ball in play rather than what had happened previously. We kept talking about controlling our breathing and just playing the way we had practiced all season.”

Along with the match against Aurora, Rukavina felt the outcome against Kitchener Waterloo in the semi-finals could have also been a toss up with both teams evenly matched and ranked second entering the tournament after the Pakmen had previously won two gold and two silver medals in tournament action.

“We had played Kitchener Waterloo a lot this season with it being pretty even between wins and losses,” he said. “They were one of the top teams in the province all year and a tough semi-final matchup. We made a couple lineup tweaks (after the final preliminary round loss), but for the most part, all 12 of our guys showed up and battled pretty hard to win 2-0.”

Every player offered something important to the team’s success, with Milton’s Ceolin and Greenidge no exceptions to the rule.

“Quintin was our youngest athlete on the team,” explained Rukavina, “but an incredible contributor to our team’s success. He won the coach’s award for Volleyball IQ at the end of the season for having a strong knowledge of the game and being in the right place at the right time.”

Meanwhile, “Marco, one of our older athletes, was a dominant force since day one. A strong attacker, blocker and server, he helped our team get to the next level. He also won ‘Most Coachable’ as a coaches award.”

Based on their reactions to being crowned champions, Ceolin and Greenidge can also be considered among the most upbeat.

“(Winning) was amazing,” said an enthused Greenidge. “It was like I won the Olympics. I would’ve never thought that we’d win, considering we went into the tournament ranked third and we were playing a team that we lost to twice. The experience of playing in the 2017 Ontario Championships was breathtaking and winning gold made it 75 per cent better.”

The dynamic 4-foot-10 Greenidge, who owes his love for volleyball to Irma Coulson Public School coach (Adam) Finkbeiner, appreciated the Pakmen club’s talent level from afar last season, before striving to become a part of the rep team this indoor season.

“I played for another club last year and I saw and played against Pakmen — they were spectacular. I aspired to be half as good as them. The following summer I joined a one-week Pakmen (advantage) camp in Milton, mainly to see if I could tryout for the 13U team, but I got way more than that. The coaching (from Diem Huynh, Ethan Ellison, and Manu Chatha) was amazing, the drills were super helpful, and it was well organized. All the kids were polite and loved the camp too.”

Ceolin also cited his great admiration for the club’s program as the reason for joining.

“I decided to join Pakmen because I knew I would be getting top notch training,” said the 5-foot-7 Grade 8 student at Guardian Angels Catholic School. “Pakmen has a great reputation, which follows them everywhere, and I wanted to be a part of a successful league. I wanted to be challenged and taught new skills from some of the best coaches. And Pakmen offers that.”

After a year into his indoor career with the club, and Ceolin is even more enthusiastic for what lies ahead.

“I’m glad I joined Pakmen, because they taught me new skills, corrected old habits and challenged me to do my best,” explained Ceolin. “Their coaches are very encouraging, positive and fun to be around, and they taught me important skills that I will be using both on and off the court.”

Among the lessons taught by coach Rukavina, who offers his young charges experience at the club, provincial, national, university and professional levels, is to remain cool and calm under pressure. And that came in handy when having to fight back from a tough second set loss in the championship final.

“Initially I was nervous, but I believed in my training. And I was trained to stay focused and keep a positive attitude,” said Ceolin. “I had faith in myself and, most importantly, in my teammates. During the gold medal game I focused on our team motto which is ‘next play’ and that helped me stay calm and play the best that I could.

“It was extremely exciting to win the OVA gold medal. We trained very hard all year long to become the provincial champions. It felt amazing to win the final set, all of our hard training paid off.

“Joining the Pakmen league was a great decision,” concluded Ceolin, “and I hope to continue to play for them for many years.”

Greenidge’s recollection of the final match ran the full gamut of feelings.

“There were many emotions,” exclaimed Greenidge. “I went through, sadness when we lost the second set, and fear when it was 14-14 in the third set. I felt happy when we won the third set. But no matter the mood someone on our team is in, the whole team and staff is there for support.”

That camaraderie Greenidge speaks of continues even after the championship win. While the season is technically over, the lessons never stop.

“(While the season is) done, we’ve been having some fun at practice, playing different sports, and trying to improve some technical aspects of specific players,” said the 28-year-old Rukavina, who was a multi-sport athlete through high school, before beginning his club volleyball career at the relatively late age of 17 with the same Pakmen club.

Yet, through hard work and a deep knowledge of the game, Rukavina was able to parlay his game into a successful university career at Queen’s before traveling overseas to compete professionally in Jonkoping, Sweden for Habo Wolley and near Stuttgart, Germany for TV Rottenburg.

Through interaction with the players, Rukavina hopes to make his current charges great students of the game as well

“Playing volleyball at many different levels provided me with an understanding of how the game works and the skills required to be successful,” said Rukavina when he embarked on his coaching career last year. “Through my Education degree and years of working sports camps, working and interacting with children, is something that comes naturally to me. Every child and every athlete are different and therefore need to be coached differently. I just want to be in the gym, or on the beach as much as possible, learning from, and interacting with athletes.”