With a Coach Who Pulls Teeth to Relax, Iceland Becomes a Contender 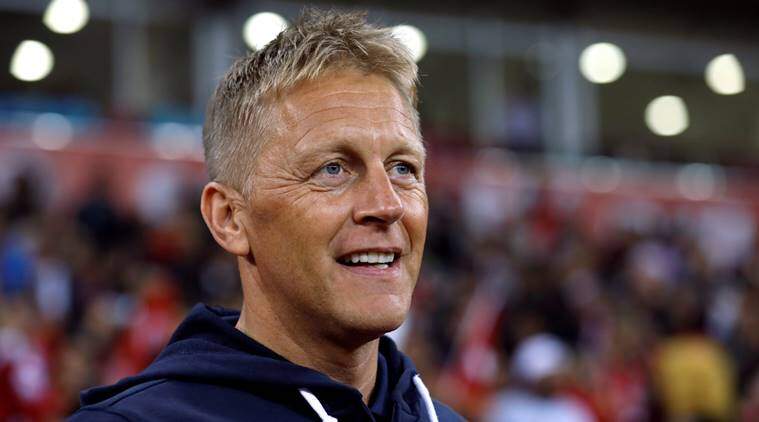 In her article for the New York Times, entitled, “With a Coach Who Pulls Teeth to Relax, Iceland Becomes a Contender,” Sarah Lyall writes about Heimir Hallgrimsson, who coached Iceland, the smallest country ever to qualify for the World Cup of soccer. Hallgrimsson’s team achieved an astounding finish of having reached the quarter finals in the 2018 tournament. Hallgrimsson also continues his original profession as a dentist when time permits. Lyall makes several great observations about Iceland’s efforts, and Hallgrimsson’s own methods, which are applicable to coaches in all sports and especially coaches of underdog teams.

Lyall notes that Iceland was able to advance from being 133rd in the world to the 22nd spot in the course of six years.  Its soccer team did so in part because Iceland developed more coaches, and built many indoor soccer fields across Iceland. It developed core players who played together since they were boys. Iceland also developed a game plan designed to compete against more powerful opponents. Hallgrimssson started with the national team in 2013 as an assistant, and has been the head coach for the past two years. Likewise, Pakmen, the club my sons play for, and where I help coach, has developed many of its top coaches from within. Many club-level players in the upper age groups assist in the club’s affiliated after school and weekend volleyball programs, thereby gaining experience in coaching as well as solidifying their own skills through teaching.

Some of these same players return to the club after graduating from the top junior level, or after completing university, to assist or coach the youngest teams.  These new coaches have won many provincial and national titles and so are able to pass on the successful coaching methods they were exposed to as young players. At the same time, the club is able to attract experienced university-level coaches to help with the older teams, or as consultants to the whole club.  This practice ensures that the knowledge base of the club keeps growing. It helps the club stay successful.

Hallgrimsson believes that part of his team’s success was fan support. This was built up by encouraging fans to feel invested in the team’s development. Hallgrimsson initially began by inviting a small group of fans to a local pub, where he would explain the team’s strategy for the next day’s game. He would even show them the same motivational video he had shown the team. He continues this practice even as head coach though the fan group now consists of hundreds. He believes it is important for giving the fans and the team a sense of “closeness,” and for informing a “coaching philosophy that emphasizes the collective ‘us’ over the individual ‘I.'”

I suggest that young teams can increase their closeness in a similar manner by keeping parents informed of the direction and progress of the team. I doubt many teams would adopt a pub night for parents, but occasional emails and team outings will likely suffice. Many coaches will no doubt recoil at the idea of overzealous parents interfering with the team, but if done in a professional manner, parents’ understanding will often help their children stay on track during difficult periods.

Hallgrimsson also states that “if we believed that it’s down to one or two players, we would be losing before we played the game.” He adds, “It’s an important message to kids in Iceland, because a small nation can’t make it with just one guy.” I believe this “closeness” should be developed on all of our teams irrespective of the size of a club or, in fact, a country. With “closeness,” the gap between the strongest and weakest players is minimized during practices and games. With focus remaining on supporting the team above all else, I’ve found that the weakest players improve faster and find the optimal manner in which they may contribute, while the strongest players learn to perform under pressure as well as developing a wider range of skills.

The whole team must buy into a system of play and focus during practices that maximize the team’s strengths while compensating for weaknesses with tactics and strategies. This may seem like common sense, but too often teams organize and train according to a textbook or some other coach’s methods rather than adapting to their own players and specific opponents, as Iceland has. These same teams often rely too heavily on their strongest players, and, consequently, underperform when these players have a bad match or an opponent neutralizes them.

I’ve often told players that they will be subjected to many, often contradictory, instructions throughout their sporting careers. They should give careful consideration to all. When they reach their highest level they should then settle on what works best for them, though they should stay open to learning something new. The same advise goes for coaches. Every single player is different and constantly changing, like one’s competitors. In other words, everything you’ve ever learned about the game, from any source, is valid when it comes to coaching your unique team.

I urge you to read the entire article here for an inspiring “David and Goliath” story that may inspire any team to overcome its weaknesses and its tougher foes.

Alexander Ketrzynski is currently an assistant coach with the Pakmen Volleyball Club, and father of three sons who are also passionate about the game.