14u Pakmen Win Gold in Exciting Comeback Fashion at Nationals 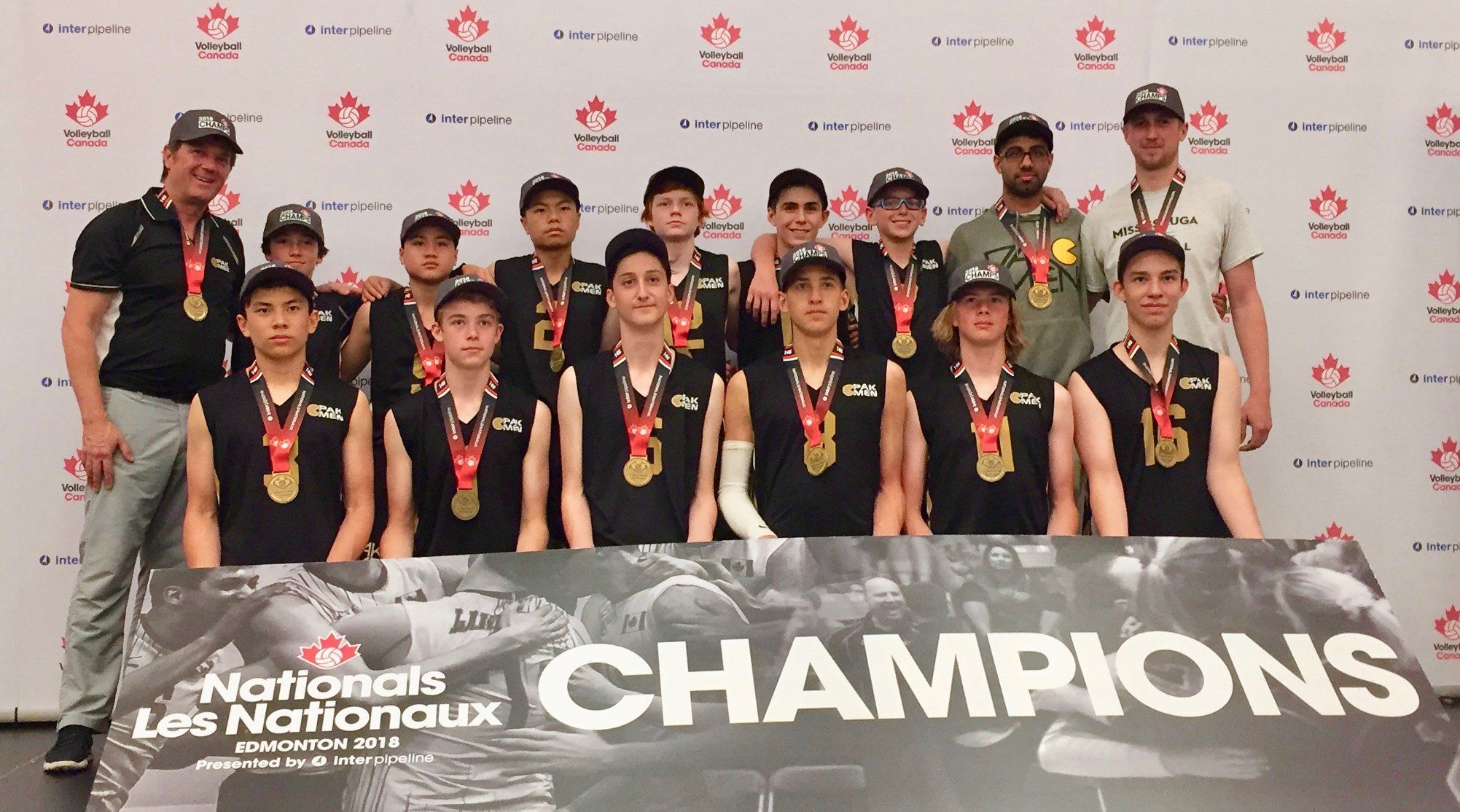 The 14U Pakmen displayed unwavering courage and resilience to capture the 2018 Volleyball Canada Nationals at the Edmonton Expo Centre last week (May 20-22).

Facing a foe in the gold medal final that had their way with the Pakmen in the preliminary round, it seemed a foregone conclusion that Pakmen would have to settle for silver after dropping the opening set to Quebec’s Samurai Gold.

Yet, somehow, someway, the Pakmen brushed off the adversity of losing 26-24, 25-15 in the preliminary round and 25-20 in the opening set of the gold medal match with a spirit that will serve them well for years to come. Boosted by head coach Niko Rukavina’s words of encouragement, the Pakmen shocked the Samurai and many members of the crowd to win the next two sets, 25-16, 15-5.

“I think the boys were a little caught off guard the first time we played Samurai, as they had two very dominant physical players that got most of the touches on their team,” explained Rukavina. “We gave them a lot of free balls and did not serve aggressively enough to stop their big attackers. In the final, we realized we were just as physical and dominant as their two players and put them in tough situations.

“The coaching staff has been preaching all year about how deep our team is and that we can roll out any combination of our 12 guys and have a chance to succeed,” explained the second-year coach. “I think the belief and confidence they had in one another showed in the final.

“(While) we lost a close first set, everybody knew the next six were going to come out ready to go. All season we have played all 12 athletes and each one of those athletes has contributed and helped us reach our goal in some way.”

Owen Mellon, who co-captained the team along with Tyler Mcbride, took Rukavina’s ongoing positive words to heart in the championship final.

“The players learned to never give up,” said the 6-footer, who attends Oakville’s Linbrook Public School. “Niko’s words stressed that the second line has to come out energetic and be ready to play hard, which we did.”

“My game has improved a lot from all of Niko’s helpful drills, tips and motivation,” said Mellon. “He especially helped me in passing, hitting and to form a better platform for myself. He has made me a more confident player and person, which I am very grateful for. Niko is a very encouraging coach to me and our whole team.”

Playing on the national stage some 3,500 kilometres from home, events could have gone south in a hurry for the young Pakmen, but instead the teachings over the past two years and the camaraderie formed amongst the players, won out.

“Winning the National Gold was really exciting!” said Mellon. “This was our end goal in 14U and after losing Provincials (this year after winning in 2017) we wanted it even more. Our team was so happy, proud and emotional that we achieved our goal.”

Winning the title so far from home just made the win that much sweeter for Mellon and his teammates.

“It was exciting to travel to Edmonton. Being on the plane and staying at the hotel was fun. It really helped us bond and it was a great experience playing other teams from all over Canada.”

Of course, being on the road is nothing new for Rukavina, who grew up in Mississauga and played close to two years of club ball with Pakmen before enjoying a successful career at Queen’s University in Kingston where he earned a teacher’s degree, before heading overseas for two years of professional ball.

And what Rukavina learned from his many travels and levels of play and coaching is that each player’s needs differ.

“As a young, fairly new coach, I believe my biggest asset is knowledge of the game and athlete interaction,” said the 6-foot-4 Rukavina when he joined the Pakmen last year. “Playing volleyball at many different levels provided me with an understanding of how the game works and the skills required to be successful. Through my Education degree and years of working sports camps, working and interacting with children, is something that comes naturally to me. Every child and every athlete are different and therefore need to be coached differently.”

A year later, Rukavina’s message has remained the same.

“I still believe in differentiated coaching and knowing each athlete individually is important to provide the best coaching possible.”

Rukavina’s national and international experience also helped prepare the players for the trip to Edmonton.

“For most of the team our trip to Edmonton was the first time playing in a tournament outside of Ontario,” said Rukavina. “A goal for the coaching staff was to teach the boys how to be a part of a High Performance team playing in a different city. Sleeping in hotels, finding healthy meals, being on time for team meetings and departures and managing the emotions of playing, with the excitement of a National Championship were all learning opportunities for us. I was very impressed with how the boys handled themselves on and off the court.”

Rukavina has seen a steady improvement with all seven of his returning players, as well as the five newcomers throughout the campaign.

“The biggest improvement from 13U-14U was in the serve/pass game,” explained Rukavina.  “13U is Triple Ball format so serving and passing is less vital to success. This season we focused a lot on the technical aspects of serving and passing and I believe that made the biggest difference at the end of the year.

“We focused on a growth mindset and tried to get better every week leading up to Nationals. The fact that we worked that hard and achieved our ultimate goal of a National Championship was a great feeling as a coach.”

Winning Nationals came as little surprise to club President Kelly Smith who recruited his old player to coach the 13U team last year.

“Niko is an elementary school teacher and it’s not surprising because he’s a natural with kids,” said Smith. “When he works with his athletes, it’s easy to see how much he cares about them and how much they respect him. I had a chance to watch them scrimmage at practice right before Nationals and I knew then they were going to win. Their passing has improved all season long, and they are developing some very good habits.”

Rukavina was assisted by Mike Rukavina and Gagan Majhel.

How to Get the Most Out of a Volleyball Training Program