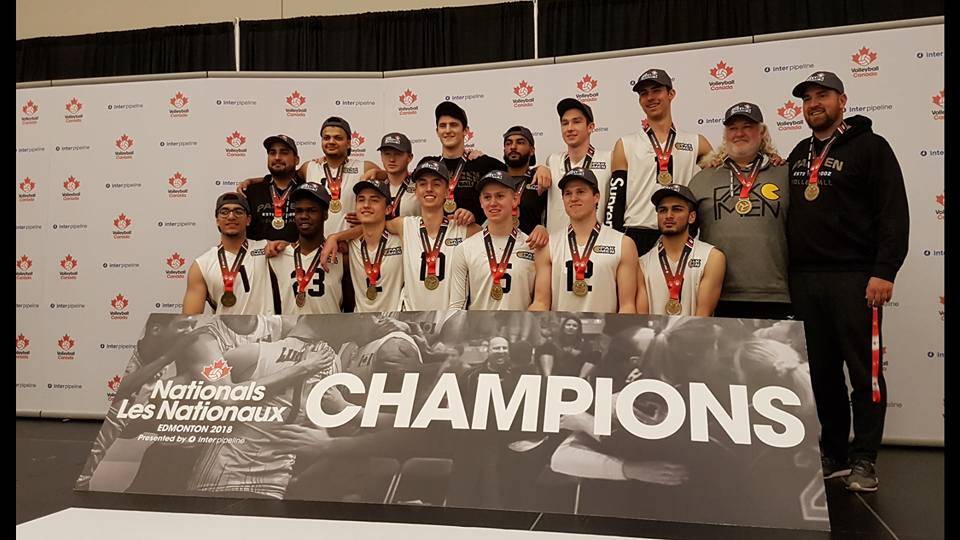 When Jessy Satti won the Volleyball Canada Nationals 18U title in 2008, it was a once in a lifetime dream…or so he thought.

Spring forward 10 years to Tuesday (May 22) at the Edmonton Expo Centre and Satti was living through that dream again, but this time on the sideline as the proud head coach of the 18U champion Pakmen Gold.

The only two 18U Canadian men’s championships the club has ever won, and Satti was posing at centre stage with the gold medal draped around his neck for both.

“Winning in 2008 was one of the best memories I had growing up,” recalled Satti, who played as a setter on Kelly Smith’s star-studded team. “It was such an unreal experience to win that championship with my team back in ’08. So, to have the opportunity to re-live that with my current team is an amazing feeling.

“Since I started coaching (this group) in 15U I would always tell them stories about when I played, and winning 18U became part of the culture on our team,” continued Satti. “Every guy wanted to win at that age. So, when it finally happened, it just felt like it was meant to be.”

But even Satti wasn’t prepared for the outpouring of support he felt.

“The team was so excited for Jessy,” said assistant coach Dave McAllister, describing how “the team jumped on him, while the Pakmen teams in the crowd cheered his name in unison. It was very special and emotional.”

“After we won, I was getting so many messages from players and parents from our club who were watching,” offered Satti of the moment. “It was great to have all that support.”

Having time to take a breath and reflect on what the Pakmen had just achieved, Satti added, “I think this is a great accomplishment for our club. We feel 18U is the gold standard of achievements in club volleyball. We’ve been in the finals for three straight years now and it shows that the club is moving in a great direction developing athletes and having them peak in their final year with us. Our hope is to continue to develop and be able to showcase our athletes at Nationals.”

But it was no easy feat for Satti and his players to claim national supremacy, especially when a dismal second day of play, almost did them in.

“(Championship Tuesday) was a pretty special day for everyone,” summed up an equally relieved and exuberant McAllister. “We knew (after those two losses) that we were extremely lucky to have snuck into Tier 1 (playoffs) after having a really tough day Monday. The coaching staff watched in agony as Fusion played Forest City with those two teams deciding our fate, as we had no control of our position.

“After an amazing game between those two clubs with the Fusion finally winning, we knew (we had advanced) due to the tie breaker formula.”

Collectively, McAllister, his fellow coaches and the players, “Recognized we were given a second chance. We had a great team meeting that evening and vowed to be mentally ready for the long, tough road to the championship.”

“The second day was a nightmare,” concurred player Saad Shaikh. “We were glad we escaped and made it to Tier 1. After that second day we had a team meeting and went over what we did wrong and what we needed to do to become national champions. The rest is history.”

“It was the worst feeling for 20 minutes thinking we were in Tier 2,” added teammate Matthew Powell. “But after finding out what happened between Fusion and Forest City we got a second life to do great things. It was a perfect way to end the season; beating Durham, which beat us at Provincials four years in a row; WinMan, who knocked us out last year in the quarters; FVVC, who beat us the second day, only for us to get revenge on the third day; and Seaside was the team last year that I sprained my ankle against.

“Ending off the year with those four matches couldn’t have been any better.”

Despite winning all four matches in straight sets, Satti admits being anxious throughout.

“We started the first set of the finals pretty slow,” explained Satti. “We (only) had a short break between the semis and final because our semis was delayed. (So) I was nervous going in because we had already played three matches and I could see my guys were tired and a little sluggish. The turning point was about 12 points into the first set when our big middle Powell hit an overpass straight down and it really got everyone fired up. That big play gave us a boost of energy, and shortly after, Xander Ketrzynski went on a 10-point serving run.”

“Winning it was a dream come true,” smiled the 6-foot-5 Powell, who will attend the National Excellence Program in Gatineau after graduating from Mississauga’s St. Marcellinus Secondary. “My team and I, since 14U, have been talking about winning 18U Nationals. There is no better feeling in the world. And It was great to have our coach re-live the moment.”

“Coaching was everything in this win,” offered Shaikh, in reference to Satti, MacAllister and Frank Pento. “They gave us a game plan for every match, which put us in the best position to win.”

Shaikh, a setter, who will attend Ryerson University in the fall after graduating from Mississauga Secondary, added that other than coaching, it was the team’s cohesiveness that played a big part in Pakmen returning home with gold.

“What set us apart from the other top teams in Canada was that we loved each other and loved playing with each other. It was more of a family culture.” 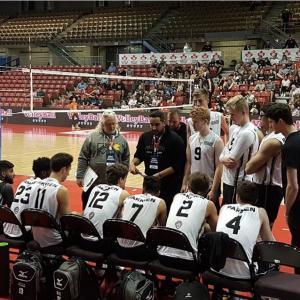 McAllister, who coached both Satti and Pento when they played for the Bruins at Sheridan College, would certainly agree with Shaikh.

“Personally I was so excited, pumped, relieved, exuberant — whatever amazing word you want to use — for Jessy who lives and breathes this club. He works so hard for the club and this team, giving them incredible opportunities to flourish, improve and showcase their incredible talents as young men and athletes. I was also very excited for our other assistant Frank, another former athlete of mine.

“The smiles on their faces was worth all the hard work, time and effort….it was brilliant!”

McAllister added that he and Pento “Watched video and live charted all the top teams and had a fairly good handle on a game plan. But, it always comes down to adjustments, and more importantly, player execution.

“We made a huge adjustment defensively, tactically, mentally and a huge commitment physically, which worked throughout the playoffs.

“And, quite frankly, in all four  games, I haven’t seen a more dominant , brilliant, confident performance in years. Our guys were on a mission. And proved unstoppable.”

Perhaps the only discord shown among the players and coaches came hours after victory during the team dinner.

“The best part of (Tuesday) night was the argument of whose team (with Satti the player and Satti the coach) would win if they could play against each other. It was really fun listening and watching the heated discussions.”

Smith, who coached the first winning team 10 years ago and admired this championship as club President, is certainly proud of both teams’ accomplishments.

“Ontario has only won U18 boys National half a dozen times in its (65-year) history,” said Smith.

“Our club designs all our programs, from U12 up to perform well at U18,” explained Smith of the significance of this championship. “Last year our girls won U18 Nationals, and our boys won silver for the past two years, but this year the boys won and we’re thrilled.

“This is huge for the club!”