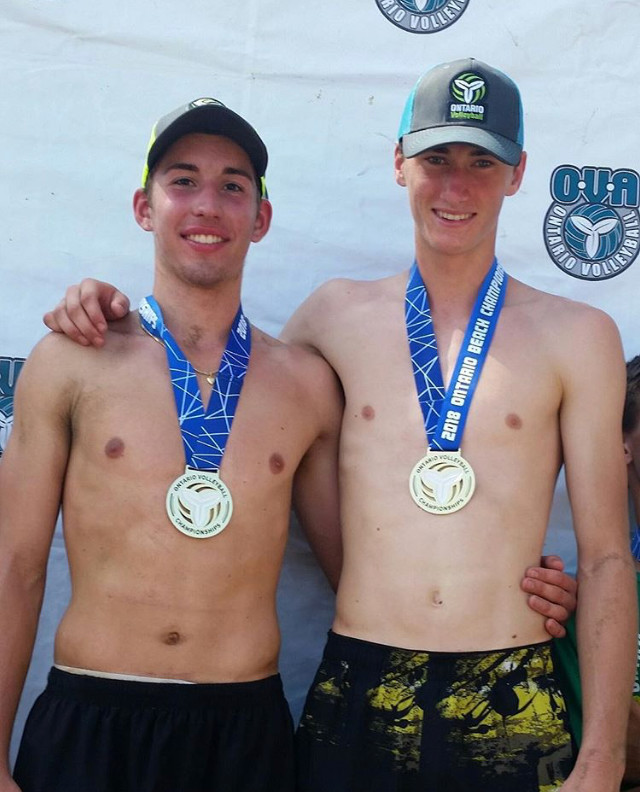 Peter Rugosi and Jackson Young couldn’t count on experience as beach partners to carry them through to the finish line at the OVA Beach Ontario Championships at Toronto’s Ashbridges Bay, August 11-12.

But what the Pakmen indoor teammates lacked in familiarity on the beach they more than compensated for with immense talent to win the U18 Boys title against 20 other top teams vying for gold.

In fact, after placing first in Pool A play with three straight wins, Rugosi and Young never lost a set in the playoffs to sweep the top spot.

“I think the two of us enjoyed the win so much because this is Jackson’s first time on the podium with a Provincial title for beach volleyball, and I personally liked it because since we didn’t have a lot of practice time or tournament play with each other, I didn’t know what to expect from the tournament. So I knew the fight for first place would be fun all the way.”

Not only were Rugosi and Young having to overcome a steep learning curve with their lack of beach experience as a team, they were also taking on a number of older players, with this being a combined U17 and U18 division.

“This championship was a bit more unique to me than my previous championships in beach since this was an 18u/17u tournament all in one,” explained the 17-year-old Rugosi, who attends Bishop Allen Academy. “So I was able to have the opportunity to play and compete against some older kids who had different playing styles than the ones I am used to with kids my age. Add the fact that Jackson and I have only practiced twice this summer and only played one other tournament, we really didn’t know what to expect. We only had our indoor volleyball chemistry going for us, while we haven’t really created any beach chemistry yet.”

“I believe the toughest match for me was the finals,” concluded Rugosi. “Steven and Josh are an amazing beach team, and since Abrams never let a ball drop without going for it on defense, he made it very tough to score. To add to that, it was the end of the day and the sun was blistering down on us, so Jackson and I were both extremely exhausted and dehydrated from playing two days in a row.”

Young, who attends Etobicoke Collegiate, can now hardly wait to get back on the beach.

“Peter and I are 2-0 this beach season with a Provincial gold and hoping to continue the streak at Nationals!” exclaimed the 6-foot-4 Young. A left side in indoor play and a blocker on the beach, Young went on to add, “When I played beach last year, I was never winning provincial golds, or most tournaments until I started playing with Peter.

“I think it’s our hard work and confidence that makes us so successful when we play together.”