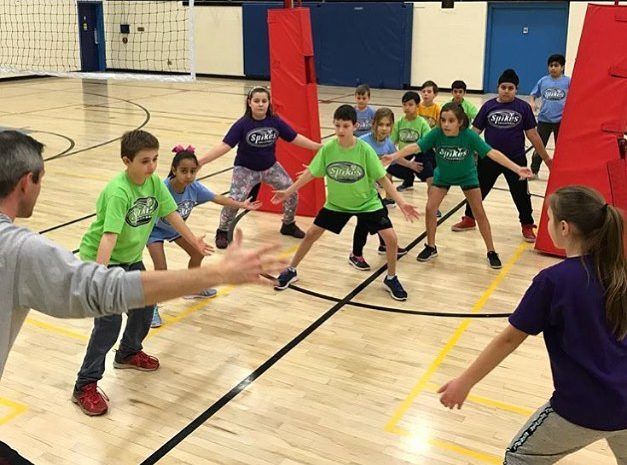 Doing this drill has a huge positive impact on volleyball player’s explosiveness, balance and speed. First of all, you need to stand with your feed width apart. Next, take your right food back. The distance between legs has to be about 4 – 6 inches. Your weight needs to be distributed equally through both legs. After that, you need to bend your knees and raise your toes. As a result, you’ll be on your toes with heels off the ground. The angle between your lower back and hips needs to be approximately 45 degrees. Make sure your back is flat. Move your right arm opposite your left leg. Now, it’s time to start driving the left leg’s knee towards the ground. Then, you need to relax and walk back to the starting line.

You can do this drill up to 10 reps. Afterwards, you have to make the drill more complicated. A volleyball player does everything once again and prepares to take off. A coach counts 1, 2 and 3.

Now, a volleyball player takes off and runs ahead.

T Drill is the perfect drill for improving lateral speed. The drill requires four cones. It’s crucial for you to place cones correctly on the court. You need to put three cones in the line. Let’s call them cone 1, cone 2 and cone 3. One of cones (cone 2) needs to be placed in the middle of the line. The angle between the remaining cone 4 and the middle cone of the line (cone 2) has to be 90 degrees. As a result, cones will form T letter on the volleyball court.

The wall drill would be a good addition to a volleyball player’s training program. You should definitely do this drill to improve volleyball speed as well as the entire game.

The volleyball drill of this type requires the wall. Initially, a volleyball athlete has to stand in front of the wall with feet hip-width apart. The distance between a volleyball player and the wall has to be approximately 3 feet. Now, it’s time for an athlete to extend the arms and touch the wall. The angle between hands and the wall needs to be 45 degrees. Your ankles, neck and body have to form a straight line.

The next thing you need to do is to place the right leg forward, so the angle between hit and leg has to be about 90 degrees. Make sure that your back is flat. After that, you have to drive your right leg back and do everything again with the left leg.

It’s a great idea to do the wall drill during the off-season to prepare for the next volleyball season. A volleyball player has to do 4 sets of the drill. Each set should take no longer than 30 seconds. Also, an athlete has to take a 60 second break after each set.

It’s important to point out that performing the wall drill has a variety of benefits. Doing this type of drill is something that helps volleyball athletes improve first step speed mechanics as well as explosiveness. And of course, doing this drill will help a volleyball player improve his/her performance on the court.

Forward lateral backpedal is the drill that requires 5 cones. You need to form the straight line with cones. The distance between cones has to be approximately 5 – 7 feet. Make sure that you have enough space between cones.

Thank you so much for reading this article. We’ve just described some of the best drills that volleyball players need to do to improve their multi-directional speed and move quickly on the court. Do these drills on a regular basis and success will not keep you waiting for a long time!

Tips for a Successful Volleyball Game