Wilkerson, Bansley win the jackpot with FIVB gold in Vegas

Brandie Wilkerson and Heather Bansley improved their odds of winning the International Volleyball Federation (FIVB) crown exponentially when they asked Lennard Krapp to be their head coach in May.

Less than two months later, on July 1, Wilkerson and Bansley stood atop the podium in Warsaw as first-time Beach Volleyball World Tour winners.

Speed forward four months to Sunday (Oct. 21) and Wilkerson and Bansley are now ranked No. 1 in the world after beating 31 top competitors at the Las Vegas Open. 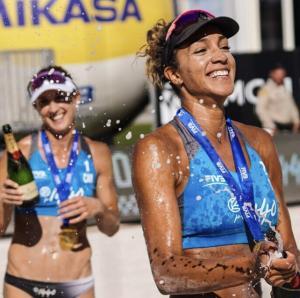 Ranked 13th in the world when Krapp, the head coach of the Pakmen Elite Beach program, took over, Wilkerson, 26, and Bansley, 31, now lead the standings and were recently named the best blocker and best defender respectively for the 2018 season.

Krapp, who is also the head coach and founder of the Markham Revolution Volleyball Club, brought over a quarter century of international coaching experience in both his native Germany and Canada into his relationship with Wilkerson and Bansley, and the results have been astonishing.

In the last 12 tour events, the Canadian duo have enjoyed six top-3 finishes, including gold in Vegas and Warsaw; silver in Boca Chica, Dominican Republic (Oct. 7) and Ostrava, the Czech Republic (June 24); and bronze in Gstaad, Czech Republic (July 15) and Itapema, Brazil (May 20).

Spectacular results, considering Canada failed to win a single medal in the circuit’s first 23 seasons, and have now won 22 medals the past four seasons.

“This journey with Heather and Brandie has been amazingly successful and very rewarding,” said Krapp. “So far, everything that has happened is part of the grand plan of working towards gold at the 2020 Olympics in Tokyo.

“(But, before that), all three of us know that there is a lot more to learn and improve on.”

Asked what made them so successful in such a short period of time, Krapp revealed the players have a willingness to work tirelessly in order to achieve their end goal.

“They are very receptive and coachable athletes,” he said. “They are willing to move out of their comfort zones and make adjustments to their technical execution and tactics.

“They stay very (united) even under mental pressure,” added Krapp. “During the tournament in Las Vegas, they made a lot of adjustments to their game during matches. Such as who to serve to, how to play block defence (against) and also some technical adjustments. Although, that was tougher to do due to the fatigue and mental pressure (that crept in) in the semi-final and gold medal matches. (In the end) they managed to be more efficient and mentally stronger than their opponents.”

Even Krapp, with all his previous international successes, was ecstatic with the result.

“This is a big win for all three of us,” said Krapp. “I have never before experienced winning an FIVB tournament and capturing the No. 1 place in the world rankings.”

With their quiet confidence and voracious work ethic, Krapp is optimistic with what the future may bring.

“They really want to win in Tokyo,” he said. “While they can, so can many other teams. They are not (over confident), and they are willing to put the hard work and thousands of reps into it. They are very receptive and coachable, which is one of the most important characteristics of a successful high performance athlete. Moving forward, we are hoping to play better volleyball than in the Las Vegas medal matches. There is room for improvement and all three of us are working hard to play better under physical fatigue and mental pressure.”

Such as a lull that occurred at the end of the second set against Maria and Carol Antonelli of Brazil in the semi-finals, which they eventually won, 21-18, 22-24, 15-11.

“We’re really motivated to keep doing well,” the 5-foot-9 Wilkerson told reporters in Vegas. “The key was staying together. It’s just the two of us in the court and (coach Krapp) has prepared us as much as he could. We’re ready for anything and those kinds of things happen. I think we handled it pretty well, we were very positive and energetic. It’s a new set at the end of the day and you can’t let those mistakes get to you.”

Bansley and Wilkerson also reversed a trend after three successive losses to Pavan and Humana-Paredes after winning their first meeting back in 2016.

“I think it’s a mix of us figuring out their game a little better and also getting better as a team,” the 5-foot-6 Bansley remarked. “We’ve put in a lot of hard work this season and we’ve seen ourselves improving. We’re just getting smarter in the court. But we scouted them and took it as any other game. We focused on what we could do well and it worked.”

Prior to their semi-final win, Bansley and Wilkerson swept all their opponents in straight sets, defeating Emily Stockman and Kelley Larsen of the United States in the quarters, Liliana Fernandez Steiner and Elsa Baquerizo McMillan of Spain in the Round of 16, and Joy Stubbe and Marleen Ramond-van Iersel of the Netherlands and Kristina May and Taylor Pischke of Canada in Pool B.

The World Tour continues this week (Oct. 24-28) in Chetumal, Mexico, where Bansley and Wilkerson will be seeded No. 1.

Keeping a close eye on all the action will be Pakmen Volleyball Club founder and president Kelly Smith, along with a number of the club’s coaches.

For, not only do they have an interest in Krapp’s connection with the team, but also in Wilkerson, who is a former Pakmen coach.

“Brandie coached in our development programs for a number of years until she made the Beach National team,” Smith proudly pointed out. He also couldn’t say enough about Krapp’s involvement.

“We cleaned up at Beach Nationals this past year and I feel we have amazing coaches. But they have all studied under Lennard for the past several years and, clearly, it’s made a difference.

“Lennard has been our lead beach coach for the past five years and has trained all our beach coaches and the results speak for themselves: Pakmen athletes dominated the podium at Beach Nationals this past August, winning almost every event.

“The biggest asset Lennard has brought to our club is the training he has provided to our key coaches Jessy Satti, Kadeem Clarke, Aleksandar Mamuzic and Prateek Yadav. He shared his indoor volleyball and beach volleyball expertise with all of them and it’s been invaluable. Lennard has been producing world-class athletes for over 20 years and he truly is a gift to this sport and our country.” 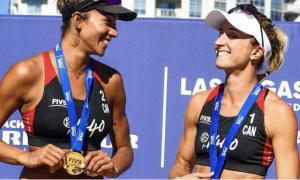 Satti, the club’s beach volleyball head coach, has enjoyed a hands on relationship with Krapp that has contributed abundantly to his improvement as a leader.

“Lennard has been an amazing asset to our beach program,” said Satti. “I’ve learned so much from him, especially about the technical aspects of each skill.

“Lennard is really good at assessing athletes’ skills, finding their strengths and weaknesses and configuring training sessions based on that.

“Lennard has been around so much volleyball,” added Satti. “He has trained some of the best players in the world and has been to many Olympic Games, so it’s great to just pick his brain and ask him questions. I learn so much just from talking about volleyball with him.”

Earning the highest certification level as a coach in Germany, as well as Sports Science and Psychology degrees at the revered Christian-Albrechts University of Kiel, Krapp displays a rare form of experience, insight and scientific knowledge to the sport, few coaches can duplicate.

“All practice methods I apply are based on scientific evidence. I can draw from studies that analyze the structure of the game at every developmental level.

“For example I am applying the ‘differential motor learning method’ when teaching skills like setting or spiking.”

Krapp combines the many aspects of his education and experience in his coaching and teaching styles, combining both the mechanics of the game and the psychology of the sport.

That helps to explain how players training under Krapp have accrued over 55 medals on the world stage in the past three decades, with undoubtedly many more to come.

My Team Just Lost Badly - What Next?