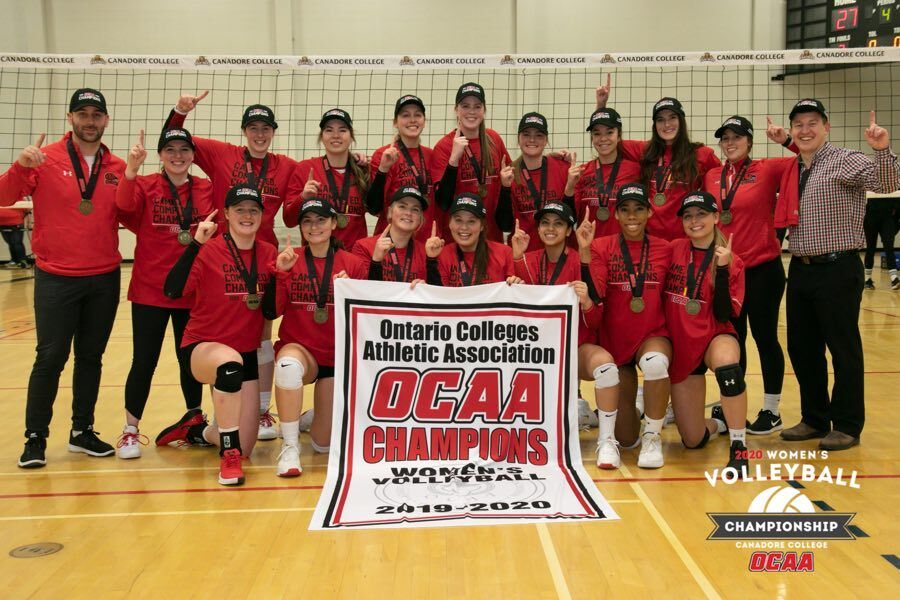 Janelle Albert and Jake Gomes have more in common than Ontario Colleges Athletic Association (OCAA) Player of the Year honors.

After outstanding collegiate volleyball seasons for the Fanshawe Falcons and Humber Hawks respectively, they have the Canadian Collegiate Athletic Association (CCAA) championships to look forward to and an enormous Pakmen fan base cheering them on every step of the way.

Graduates of the Pakmen Volleyball Club, Albert and Gomes have shined like few others this campaign pacing their respective teams to OCAA titles.

For Albert, a third year outside hitter, this is her second straight OCAA Player of the Year award after becoming the first-ever Fanshawe recipient last year. 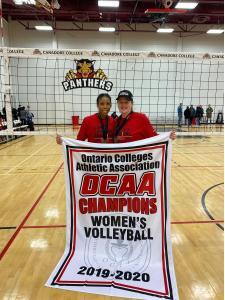 The list of accomplishments and awards are absolutely staggering for the Brampton native, who is a graduate of Toronto District Christian High School in Woodbridge. She set Fanshawe records for points and kills on her way to becoming the OCAA scoring champion, a CCAA All-Canadian and OCAA West Division First Team all-star. Her stellar play continued into the playoffs winning OCAA tournament MVP for the second year running.

During her award-winning season, Albert averaged a league-high 5.9 points per set and a .382 kill percentage on offense. She also added a team-high 185 digs defensively. In 18 matches, Albert led the league in kills per set (4.89), had 37 service aces and 16 blocks. Albert also set new Fanshawe records for most points in a season (322) and most kills in a season (269).

Not surprisingly, head coach Sean Pellow called Janelle “a huge calming influence,” when players around her begin to panic. “There’s never a moment of doubt in her mind.”

Now, the 5-foot-10 Business Marketing student sets her eyes on the Canadian championships March 11-14 in Quebec City as the Falcons look to improve on last year’s bronze medal finish.

Gomes will be heading further east for the men’s Canadian championships in Frederiction, New Brunswick.

The third year setter led the Hawks to a perfect 22-0 season to become a CCAA All-Canadian, West Division Player of the Year and West Division First Team all-star. He averaged 8.10 assists per set, good for eighth among all OCAA players. He also contributed 66 points and 59 digs over 14 matches.

Gomes also became the first player to recorded 1,000-plus career assists for the Hawks while setting Humber’s offence up to lead the league with a .367 swing percentage.

“We are extremely proud of both Janelle and Jake,” said Pakmen founder and president Kelly Smith. ” Janelle is already in our Hall of Fame, as she has accomplished so much in this sport, and Jake, I feel, is on his way. Both of these outstanding people also give back to the club by coaching in our house league programs and camps. They are role models and they are two of the reasons our club continues to flourish.” 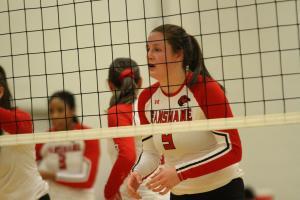 To say that volleyball is in Albert’s blood is an understatement. Albert has the distinct advantage of growing up in a volleyball family. Well before joining the Pakmen as a 15-year-old, she had her parents Mike and Jackie to look up to as well as her older brother Zach.

While Janelle’s parents met and fell in love on the volleyball court at Sheridan College as students, Zach was a trailblazer on the courts, landing at Fanshawe a year before Janelle.

“I chose Fanshawe because of the talented players on the women’s team, the coaching of Sean Pellow, and Zach, who was already at Fanshawe and had many amazing things to say about it,” said Albert, who took all of this year’s accolades in stride.

“I’m very big on being in the moment,” she said. “The personal accolades are really nice, but, from the beginning of the season, I was focused on nationals and the team’s success. As soon as we won provincials I was excited and elated to celebrate with my girls. It was a long, but fun season and our job isn’t done!”

Now, says Albert, “It’s time to concentrate on nationals (by) watching a lot of video on the upcoming teams. I have the mindset that we shouldn’t rest on our previous wins.”

And Albert has extra incentive to win the big prize with the Falcons.

“This is my second year in the two-year business marketing program at Fanshawe and I will be getting my diploma at the end of this semester.

“I’m currently trying to figure out what’s next in my life for school, but I am undecided. I am

(however) looking to play volleyball in university and complete a business degree.”

Like Albert, Gomes also prefers to stay in the moment and has his sights on the Canadian championships.

“I was surprised to receive as many accolades as I did and am beyond thankful to have played alongside the best team in the OCAA,” an appreciative Gomes said. “I try and keep a humble mindset when heading into big tournaments or competitions choosing to keep my head focused on the games. Being OCAA Player of the Year makes me beyond proud of how far I have come, but also motivates me to continue playing strong, as there is always room for improvement.”

He needn’t look for any added ‘room’ in his physical stature, as his 6-foot-6 frame as a setter is an anomaly.

“Honestly, being a tall setter helps with being an offensive threat,” said Gomes. “(But) I find my height to be almost average when it comes to varsity volleyball. The majority of players are above 6-foot, putting me just over average.” 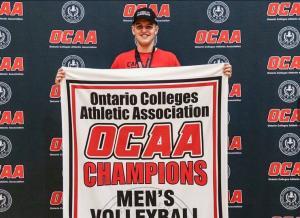 Unlike Albert, Gomes, who is studying Recreation and Leisure Studies, is eligible and will return to the Hawks next year.

“I will be coming back to play for a fourth year at Humber,” he confided. “I’m not sure what the future holds for me when I graduate. Right now my goal is to go overseas to play, or work within the sport, either coaching, or teaching at camps.”

Gomes knows there will always be a job awaiting him where it all started at Pakmen should he wish.

“I played Pakmen for multiple years and it gave me the opportunity to play at the next level,” said Gomes. “Pakmen helped me improve my skill level at a young age. I am thankful for all the coaches and teammates who helped me throughout my club years. All those who were with me through my years at Pakmen supported me, guiding me towards becoming the player I am today, by motivating me, mentoring and being by my side.

“I still keep in touch with a lot of my old teammates and athletes who still play at the OUA and OCAA levels.”

Like Gomes, Albert is also thankful for her experiences with Pakmen.

“I owe a lot of my success to Pakmen,” said Albert who began as a 15-year-old. “I owe a lot to my dad and Pat Daniels who coached me. They really instilled a lot (of information) and helped me become very sound technically. I know I always have a lot to learn and I’m a very big student of the game. Zach is my best friend and its always nice to hear feedback from, not only another family member, but someone who played volleyball at a high level and who is also a big student of the game.

“I also owe a lot of my success to Dustin Reid, who I’ve had coaching me at Ryerson (in 2017-18 when Albert was named to the Ontario University Athletics All-Rookie squad) as well as at (Pakmen) VCCE and Team Ontario. Dustin really taught me a lot about being a team player and really honed in on my skills as an athlete.”

Along with improving her skill set, Albert met and befriended many of her present day pals

while soaking up memories she will carry throughout her life.

“I have so many amazing memories from my Pakmen days, but my favorite would be winning Nationals in my second 18U year,” said Albert. “Playing an age group up I had the opportunity to play in the 18U national finals twice with two completely different teams. In my first try, we lost in the final by two points in the third set and it was a heart-breaker. So winning my second 18U final felt that much better! Some of the girls I played with at Pakmen I got to play with again at Ryerson or against them in U-Sports.”

A Message to Our Spring Members