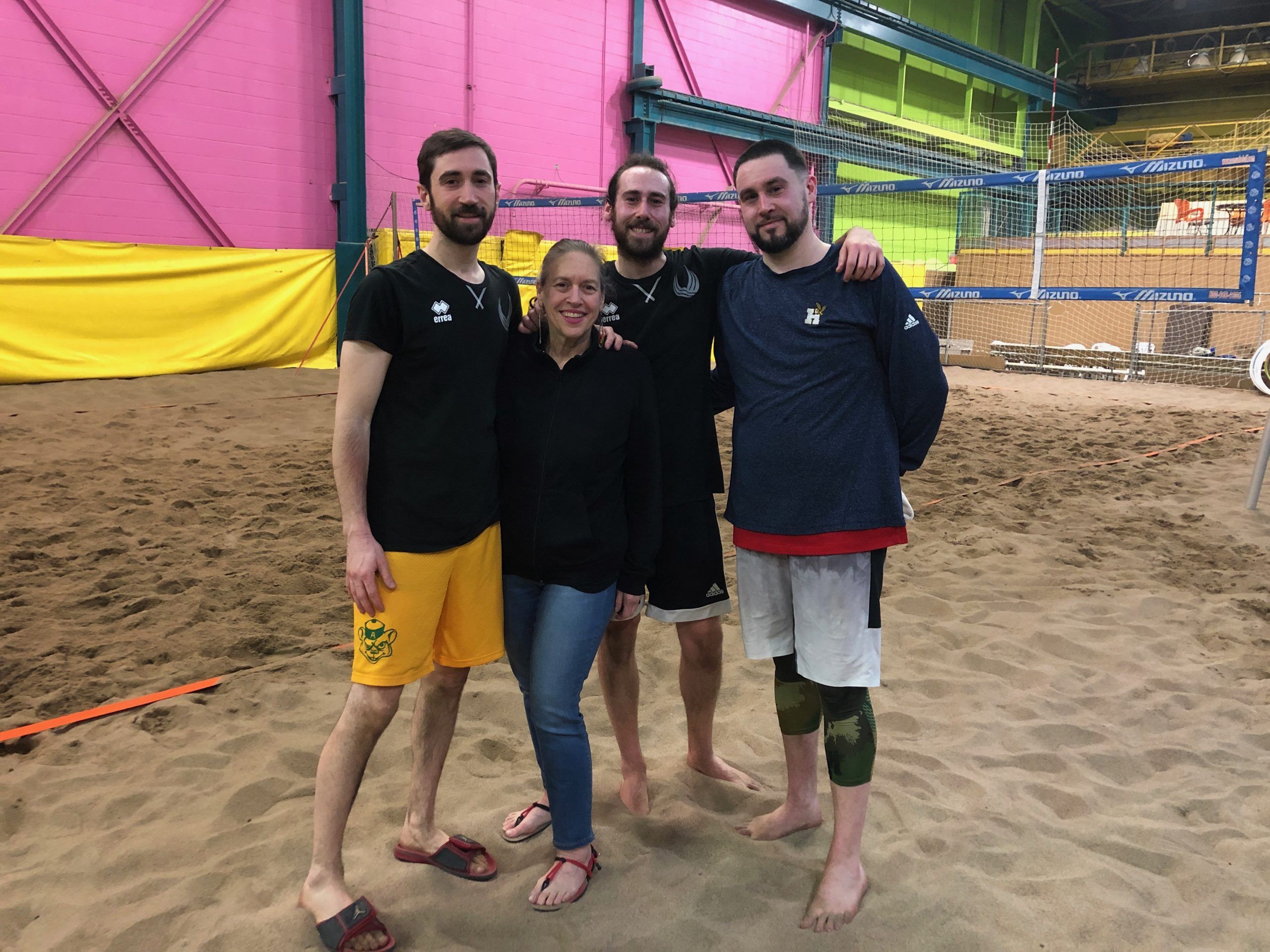 When Beach Blast closed its doors on Feb. 2, hundreds, if not thousands, of GTA residents were left out in the cold, literally and figuratively. 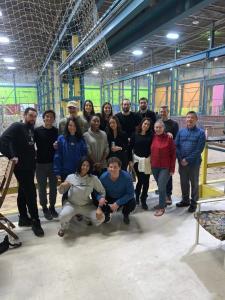 After more than two decades of operation, Toronto’s longest-running indoor beach volleyball facility, which served as the heartbeat for the young and old, professionals and amateurs, closed for good.

A dream that was turned into a reality by George Shermer in 1997 came to a crashing halt when rent on the 30,000-square-foot indoor facility, featuring seven indoor sand courts, was tripled by the new owners.

“Sad to see the end of the Leswyn indoor facility,” said Shermer’s partner Josh Gluskin. “There’s so many great memories and thousands of positive experiences for such a wide swath of the volleyball community. From youth, to adults, rec, intermediate, competitive-level players. I took it a little for granted that it would always be there and how important it was for so many customers.”

Gluskin added, “We are looking for a new venue, but the real estate prices have increased so much. It is a challenge. I hope it’s not the end of an era. So little else is available for year-round beach.

“Providing people a venue to play – that people were choosing to participate in and being lifelong volleyball players, coaches, fans and supporters, was a dream. The ending is definitely a nightmare.”

Gluskin did add, “We have been able to rent seven Saturdays at The Volleyball Canada National Team Training Centre at Downsview Park from Feb. 29-May 2 to run some leagues and tournaments. And, our eight outdoor beach volleyball courts at Caledonia Park (that opened in 2003) adjacent to our Leswyn building, will also be open beginning in May.”

It didn’t take long for the volleyball community to display an outpouring of emotions when the news broke.

“We have received a tremendous amount of feedback from current and past customers since we made the announcement that the building was sold and the new rents were tripling, which made it impossible to reach an agreement with the new owners,” said Gluskin. “The comments were mainly what a fun, positive, social experience Beach Blast offered. We put a guest book out the last two weeks during our adult leagues and it is filled with messages expressing heartfelt emotions, the joy of playing weekly with their friends, the relationships and friendships that playing at Beach Blast created. So many spouses met at our venue. Most referred to the special community of people that evolved over the past 23 years.” 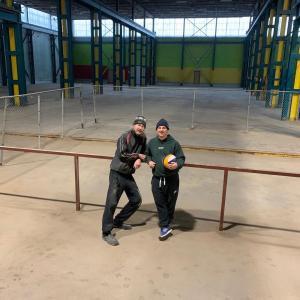 George Shermer was inspired in the 1970’s to open an indoor beach volleyball facility after playing beach volleyball at Balmy Beach in Toronto (Ashbridges Bay didn’t have beach courts back then) and an extended trip to the beaches of California. It took some time for him to gather some friends, including Madawaska Volleyball Camp founder Paul Brownstein, as partners and investors.

After beginning the search for a building in 1996, the partners finally settled on 15 Leswyn Rd.

From the time Beach Blast opened in Oct. of 1997, the business was a huge challenge, recalled Gluskin. While expenses remained consistent, revenues took time to grow. It was Shermer’s willingness to spend his life savings in the early years that kept Beach Blast afloat and it has been a stable enterprise since about 2005.

“I started working as the first full-time employee in Feb. 1998,” said Gluskin, “and became a partner in 2001. George and I have been running it together since then and have been the only owners/operators since about 2007.

And what a ride it has been as Shermer, his son, Elie, and Gluskin used every bit of imagination to come up with a myriad of ways to make Beach Blast viable, from weddings, to Bar Mitzvahs, to shooting, on location, the ‘5 a.m. in Toronto’ music video by internationally renowned rapper Drake in 2013.

“The Grey Cup trophy was here recently, and every Spring a group of NHL athletes trained in the sand,” said Gluskin. “We have hosted ultimate frisbee leagues and tournaments and soccer and dodgeball, including the Canadian Beach Dodgeball Championships in the sand.

“We have had Salsa dancing and Zumba and military style fitness boot camps. Reggae and Soca parties and University Frosh weeks. The University of Toronto had almost 800 first-year students cheering themselves crazy on one court.”

Indeed, the list of events Beach Blast hosted over the years has been inexhaustible.

“Tournaments and clinics and March Break camps all filled our courts with passionate players,” recalled Gluskin.

“Corporations bonded their teams on the courts and Milestones annual tournament is one of their most popular team building events. School groups and kids birthday parties worked as springboards to introduce beach volleyball to thousands of youths.”

And, according to Gluskin, Mississauga’s Pakmen played a major part in Beach Blast’s success.

“In our early Beach Blast days, we were featured in the media pretty regularly,” explained

Gluskin. “Breakfast TV, The Weather Network, TVO, newspaper articles in the Toronto Sun and Globe & Mail. And when these media groups requested people in the background, we just called Kelly Smith, founder of Pakmen and a middle school teacher and they would show up at the appointed time with a large group of enthusiastic kids from David Leeder!”

Not to mention star Pakmen athlete Sharone Vernon Evans played and trained at Beach Blast often, while the Pakmen club itself ran many camps at Beach Blast as well as its annual Christmas party.

“We have also been lucky to be involved in so many fundraisers at Beach Blast. Those events raised millions of dollars and increased awareness for a wide variety of worthwhile causes,” said Gluskin. “Some notable events ran for years, benefiting Mount Sinai Hospital,  Icewave for Sick Kids, HOPE Tournament, Toronto City Mission, SPIKE ALS, Beach for Ben – there are too many to mention, but they all attracted a caring organizer and a community of supporters dedicated to putting the fun in fundraising.”

But, perhaps nothing put Beach Blast on the volleyball map more than the stars who called it their home away from home when preparing for international tournaments.

Perhaps the most famous of that group were Heese and Child. Forming a team in 1995, they immediately found success, capturing three bronze medals at the FIVB World Tour, culminating in a bronze medal at the 1996 Olympic Games in Atlanta.

“Mark Heese came to our goodbye drop in evening and was very sentimental about what Beach Blast meant to his career and his life,” said Gluskin. “Mark spent hundreds of hours at Beach

Blast and led clinics and camps and boot camps for youths and adults for years.”

“Beach Blast was an integral part of our team for over a decade, and (they) did everything they could to support our Olympic goals and FIVB World Tour commitments, as well as other aspiring pros,” said Heese. “Without them it would have been very difficult to put in the year-round training required to prepare and compete on the World Tour, as well as qualify for three Olympic Games (1996, 2000, 2004). They truly love beach volleyball and did everything they could to help grow the sport at all levels.

“In 10 years, I can’t think of a single time, when George or Josh said no to one of our requests for court time,” added Heese. “Even our 6 a.m. sessions, to support our coach (Hernan Humana’s) schedule, who worked during the day, sure enough they would be there opening up early, preparing courts, and heating the place for us, for no real reward, except to know they were supporting our gold medal dreams. They were truly one of our most loyal ‘sponsors’. We weren’t the only team they accommodated either. They were just fans of aspiring athletes and supported us as well as they could. So it definitely saddens me to hear that they will have to close Beach Blast due to rising rental costs. The beach community will be at a big loss, so hopefully they can find a new home soon!”

“Without Beach Blast it would have been very hard to prepare for the Olympics or other competitions,” offered Humana. “Beach Blast was our most important training grounds for the 2000 Olympics in Sydney.

“At certain points in my life I would be there every day coaching John (Child) and Mark (Heese), coaching young players, as part of my Elite beach volleyball club, or running corporate activities. It was my second home, if not my first.

“In addition, I ran beach volleyball classes there twice a week for the school of Kinesiology and health science at York University.”

Humana didn’t have to cast his eyes any further than his own household when explaining the impact Beach Blast had on the volleyball community. His daughter Melissa and son Felipe Humana-Paredes started playing at Beach Blast on Sundays “at a program George and I organized for young kids. And, all birthday parties for Melissa and Felipe were at Beach Blast. It was a great family place.”

All that time at Beach Blast paid off, as Felipe and Melissa are now international stars.

Championships, defeating the American team of April Ross and Alix Klineman for Canada’s first ever medal at the event, which qualified them for the 2020 Olympics in Tokyo.

“The people are the biggest memories we will retain,” concluded Gluskin. “The weekly adult leagues are the backbone of Beach Blast.

“There are approximately 600 people that play weekly. A handful were here at the beginning.  And, a few individuals have been playing for almost the entire (23 years). Many have been here for over 10 years and some just started.

“Leagues are addictive,” added Gluskin. “Something to look forward to every week, see familiar people, meet new people, compete in a low stress environment, get some exercise, sweat and socialize. I have been doing this for so long that my son wasn’t even born when we started and for the last two years we have played together on a Thursday night 4s team.

“Our staff and employees have been contributing to the fun environment for many years. Many employees were aspiring beach players. In the early years, we had the B.C. connection of Darren Goss, Mingo Miguel, Brian Hiebert, Ryan Cawsey, Dan Casey, Adam Parkes. We must have had the tallest workforce in Toronto that year.”

“Beach Blast meant so much to me,” explained Elie, who is an event promoter and music manager. “It opened when I was 18 and I was already a (competitive) player on my club volleyball and on my high school team.

“My first experience at Beach Blast was in 1997 when coming back from a week at Madawaska volleyball camp with my buddy Jay Fleischman.

“It was less than two months before we opened and it was cool to go in and see such an incredible place taking shape and becoming the world’s No. 1 indoor sand entertainment facility. It was really cool working there from the beginning and seeing the place develop. I got to play there and meet tons of people; some of whom remain in my life to this day. This place completely expanded my social network and gave me the ability to continue to build.”

One of Elie’s fondest memories, to this day, was helping prepare for the facility’s opening by raking and adjusting the sand and setting up the nets with his high school and club volleyball buddies.

While the facility may be in the rear view mirror, the memories for Elie and George Shermer and Gluskin will continue to live on.