Schmidt and Fulmer go ‘the distance’ at OVA Beach U15 finals 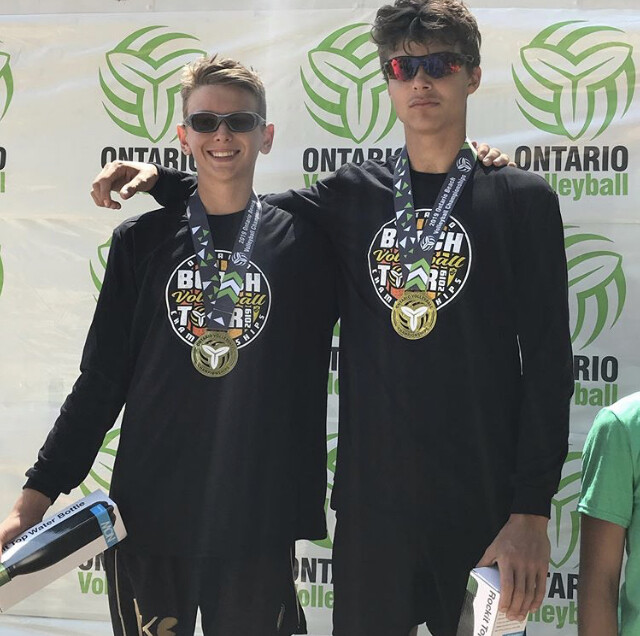 Most long distance relationships fizzle out over time.

But in the case of Kaden Schmidt and Peyton Fulmer their introduction at last year’s Ontario Summer Games, has been nothing short of a golden opportunity.

As winners of last year’s Games, Schmidt and Fulmer decided to partner up for this summer’s beach season.

After another gold medal performance at the OVA Beach Ontario Championships at Toronto’s Ashbridges Bay August 3-4, in the U15 Premier Boys division, their bond has grown even stronger.

“Peyton and I have gelled on and off the court,” explained Schmidt, who resides in Mississauga and attends Toronto District Christian High school in Woodbridge. “Since meeting at the Ontario Summer Games last summer our friendship has continued to grow.”

To make their beach partnership work, Fulmer has spent much of this summer training with Schmidt’s Pakmen club in Mississauga.

“Because he lives in Barrie he has stayed with me in Mississauga for training, or during tournaments at times,” said Schmidt. “This has given us the extra time to just hang out and bond. We both like to have fun while trying to improve on our game.” 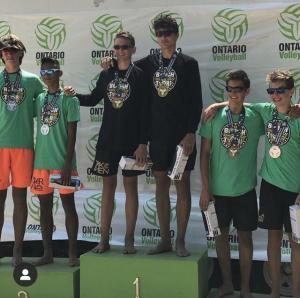 So far so good in the eyes of head Pakmen beach coach Jessy Satti.

“We’re really happy about Peyton and Kaden,” said Satti. “They are a really technically sound team and it’s one of the reasons why they have success.

“They are both incredible kids who work hard and are open to learning new things,” added

Satti. “We are incredibly happy for them.”

For Schmidt, this is his second straight OVA beach title, having won with partner Nikola Mitrovic in last year’s U14 championship.

This time around Schmidt and Fulmer entered the tournament against 19 of the best teams as the No. 1 seeds.

After defeating Conor Doran and D. Kuzhlev of Pakmen; Tyler McBride and Liam Kinahan of

Kitchener Waterloo Predators; Max Tsiapalis and Rahmaine Ouattara of Milton Edge; and Adam Shapcott of Pakmen and Eric Reci of Unity in the preliminary round, Schmidt and Fulmer turned their attention to the playoffs.

After defeating Jack Stanley and Michael Dobell of Durham 2-0 in the quarters, they beat the Ottawa tandem of B. Scholberg and C. Francis in the semis, before sweeping away Daniil Hershtynovich and Marcus Cheung 2-0 (21-16, 22-20) in the gold medal match.

“Every game against Daniil and Marcus was always fun, because we are friends on and off the court as well,” said the 6-foot Schmidt. “However, they always brought their best game and we had to bring ours in order to win.

“We were expecting to win, if we played our game.”

Next hurdle for Schmidt and Fulmer are the Nationals in the U16 classification.

“There is always room to improve our game in almost every area,” said Schmidt as they prepare to move up an age group. “It’s important for us to keep working as a team instead of playing as individuals.” 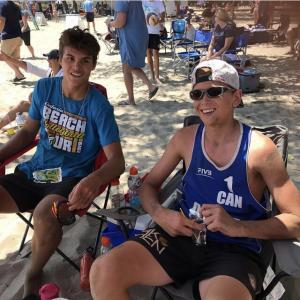 To help in that end, Schmidt and Fulmer have also received the aid of a Pakmen alumnus, Taryq Sani, who went on to star for the University of Alberta Golden Bears for three years.

“I want to make sure it’s abundantly clear that coaching Kaden and Peyton isn’t a coaching gig for me; it’s the opportunity for me to help two amazing individuals reach their goals on and off the court,” explained Sani.

“I began coaching the both of them last summer at the Ontario Summer Games on the Region 5 indoor team,” added the 20-year-old native of Ajax on how they met. “I loved their determination, passion, and willingness to learn the game, so I began to mentor the two of them.

“I made it very clear to them from the get-go that the coaching/mentoring I give them isn’t necessarily the ‘correct way’ but it’s the only way I know how to live, play, and teach the game. Nonetheless, they bought into my coaching and soaked up every word of advice I had to give whether or not they found value in it.

“They took the coaching of myself and the Pakmen coaches and created their own brand of beach volleyball that is unique, very exciting, fun and evidently hard to beat. Kaden and Peyton are two individuals that put everything on the line to be the best version of themselves they can be day in and day out in order to ensure they’re at their peak performance for one another. Working with them is an absolute honor, and watching their journey this past year has been equally as much of a pleasure for me. I have enjoyed every moment I have spent working with these guys. They have been working very hard, and the results are indicative of that; I’m extremely proud of them both.”